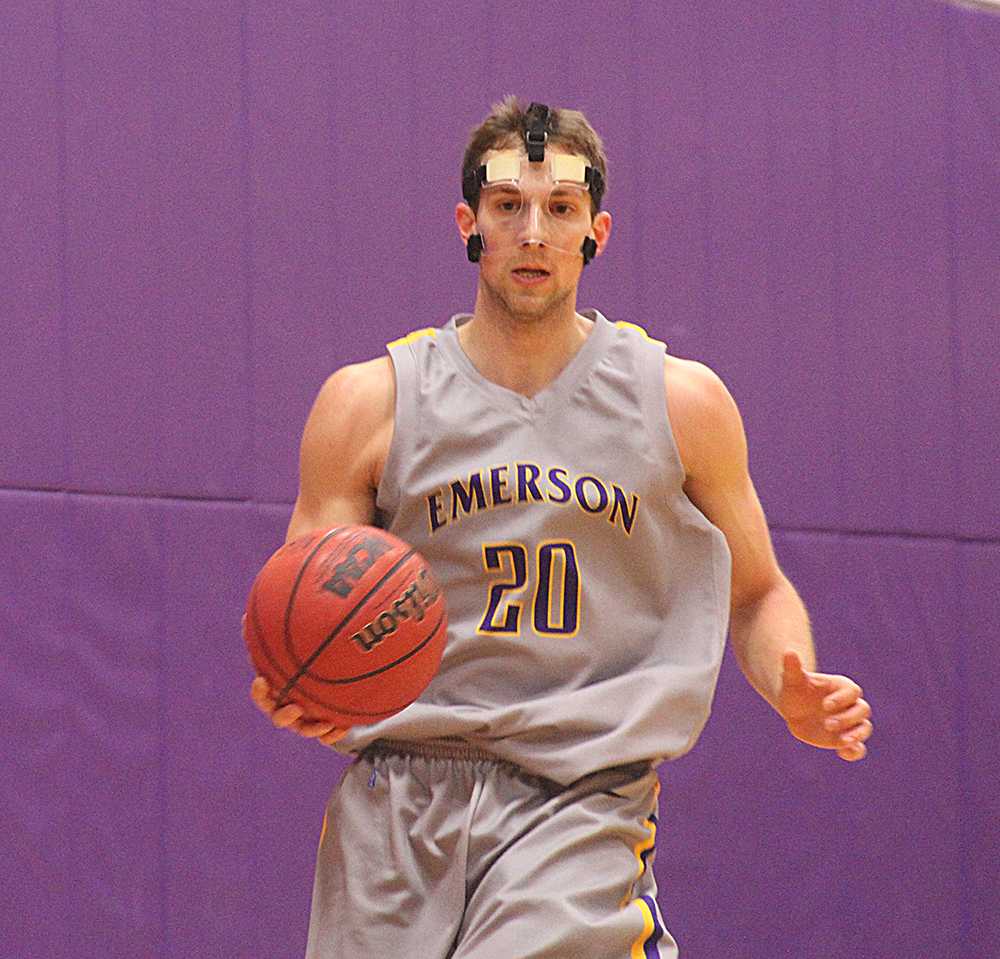 For the past two weeks, a mysterious, masked man has been spotted practicing and playing with the playoff-bound Emerson men’s basketball team.

His teammates have already created several nicknames for the Lions’ on-court hero donning the conspicuous mask — “Captain Bane” and “The Masked Man,” to name a few — but the figure’s true identity is that of versatile senior captain Jon Goldberg.

In the first half of a Feb. 6 win over New England Women’s and Men’s Athletic Conference leader Worcester Polytechnic Institute, Goldberg was driving on the baseline and pulled to a jump stop. But when he bent down, a knee hit Goldberg in the face.

“Blood was gushing everywhere,” said Goldberg, who finished the 71-67 win with 16 points and 15 rebounds. “It was disgusting, but I stopped the bleeding and played. I found out the next day [my nose] was fractured.”

A player who both works the perimeter and tussles inside with the goliaths, the 6-foot-4 Goldberg recorded 13 of his rebounds versus WPI after breaking his nose.

Goldberg also sustained two black eyes from the event and has since been forced to play and practice with a protective plastic mask covering his face.

After winning that bar fight with WPI (20-3, 10-2), Goldberg starred in wins over Clark University and Coast Guard to clinch Emerson (13-10, 6-6) the final spot in the NEWMAC Tournament, making men’s basketball the first Emerson sports team to make a postseason tournament since the Lions switched athletic conferences this year.

“It’s not that bad, especially after the first couple days of practice with it,” Goldberg said of wearing the mask. “In the games, you don’t really worry about the little factors; you just play the game and deal with it. [Luckily] it’s not hindering me from playing.”

“[O’Brien] has been on me to be more aggressive the last two years,” said Goldberg. “I didn’t want to look back and have any regrets and I knew I could do much better than I was.”

Goldberg, a 23-year-old Vermont native, transferred from New York’s St. Lawrence University as a junior. Goldberg started 22 games for the Saints during his sophomore year, but after his second season, he knew a change was needed.

“Something wasn’t right with my college experience,” Goldberg said. “I decided life was too short not to be happy, so I took a semester off and weighed my options. Emerson popped up and one of my old coaches introduced me to [O’Brien].”

In a November interview, O’Brien had high praise for Goldberg, but admitted that he saw untapped potential in the team’s Bruce Wayne.

“[Goldberg] is a reluctant star,” said O’Brien. “Never in my career have I had to tell someone to take more shots. He has the talent to be a star.”

Although Goldberg’s scoring increase has been a major storyline this season, he’s always been a hulk on the glass. Despite being undersized — he’s a full four inches shorter than the conference’s leading rebounder — for NEWMAC interior play, Goldberg’s rebounding average of 9.6 per game ranks him second in the conference.

“He is such a selfless player,” said junior co-captain Eli Kell-Abrams.”It was after the loss to WPI at home that he realized, regardless of how he felt, he needed to be that [guy] if we wanted to be successful. He’s a matchup nightmare right now. We’re going to ride him as far as we can and obviously his mask isn’t slowing him down.”

Goldberg said he is proud of his own improvements, but his main concern is the development and success of his team.

“My main goal is to always be the best teammate I can be. I want to be there for my teammates and leave everything on the court,” he said. “We are definitely not satisfied just making playoffs. It’s great being the first Emerson team in the NEWMAC playoffs, but that isn’t our goal. Our end goal is to win the NEWMAC.”

With his collegiate career coming to a close, Goldberg said he is starting to focus on his life after basketball.

“My two passions in life are basketball and helping other people,” Goldberg said. “Hopefully, next year I will be able to further my education and be on a coaching staff.”

Goldberg, who currently volunteers for Big Brothers Big Sisters of Massachusetts, said he has already applied to three Division 1 schools to pursue a variety of studies, including Marquette University in Wisconsin and the University of Miami – Florida, and he feels that coaching is a future profession that would suit him perfectly.

“From talking with [O’Brien], I was able to realize how great coaching can be. What other profession is able to influence a person so much?” said Emerson’s masked crusader, who wants to help shape lives positively in his future cover identity.

For at least a few more games, fans will watch the Emerson men’s basketball team run up and down the court and ask themselves, “Who is that masked man?”