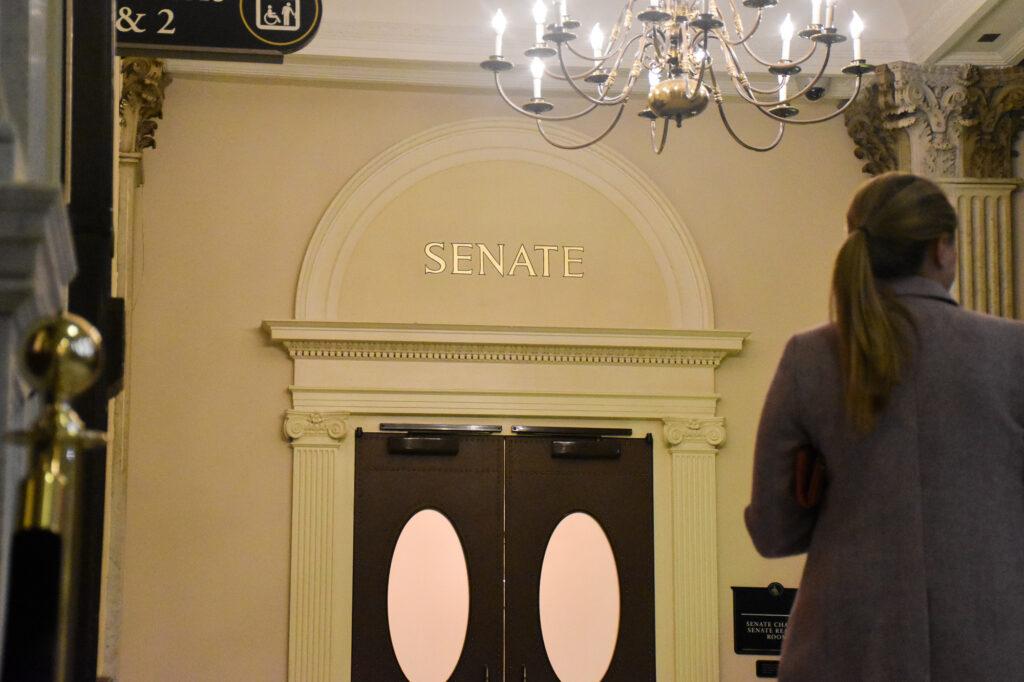 The Massachusetts State Senate passed a bill which would ban all plastic bags in the state. The house will vote on the bill next year. Anissa Gardizy / Beacon Correspondent

BEACON HILL — The Massachusetts Senate passed a bill that would ban the use of plastic bags across the state on Wednesday, taking precedence over more than 120 communities who have already passed ordinances on the issue.

The bill would also require retail establishments to charge a fee of at least 10 cents for reusable and recyclable bags. The bill was passed around 10:30 p.m. during the Senate’s last formal session of the year. Not all ordinances on plastic bag bans across the state mandate a bag fee.

The bill will go to the House and be voted on next year since the legislative session ended on Wednesday.

Boston’s plastic bag ban, which went into effect in Dec. 2018, placed a fee of at least five cents on recyclable paper bags, compostable bags, and reusable bags. The five-cent fee is collected and retained by retail establishments.

“We are at a breaking point where there is nowhere to put plastic—recycling didn’t do the trick—we need to reduce the amount of plastic that we are using,” Sen. Jamie Eldridge said in an interview. “A plastic bag for shopping or going to retail stores really isn’t needed today—there is just no justification for plastic bags.”

Emerson Student Government Association Sustainability Commissioner Gianna Gironda said in a statement to The Beacon that she supports the statewide plastic bag ban.

“I am also in support of the proposal to give half the ten-cent fee of purchasing [bag] to the city or town for recycling, ban enforcement, litter prevention, and reusable bag programs,” Gironda said. “This is an amazing first step in integrating sustainable practices into our daily lives.”

Emerson College does not have its own plastic bag policy, but following Boston’s ordinance, the college stopped distributing plastic bags. The Textbook Annex and the campus Barnes & Noble both charge 10 cents for bags.

The Office of Housing & Residential Education also established a take-one-leave-one reusable bag program to encourage students to use reusable bags for shopping.

The college adheres to state laws, so if the proposed bill becomes a law, the college would be required to adjust to the new regulations.

Campus Sustainability Manager Catherine Liebowitz said in a statement to The Beacon that this year’s incoming freshmen received multiple items to promote sustainability.

“During Fall 2019 move-in, all incoming students who live in the Little Building received a ‘welcome kit,’ which included a reusable clamshell, reusable tumbler, and reusable grocery style bag,” she said. “This kit included information about Boston’s plastic bag policy.”