The Berkeley Beacon • May 1, 2021 • https://berkeleybeacon.com/massachusetts-must-open-social-cannabis-consumption-spaces/ 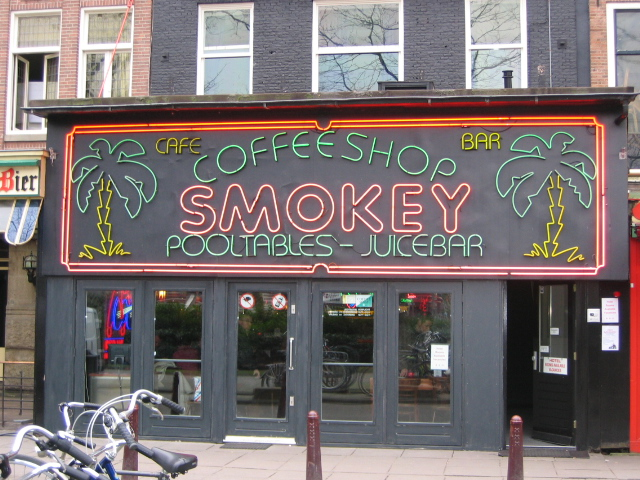 Smokey Coffeeshop is just one of the many social cannabis consumption spaces in Amsterdam.

There we were, three college seniors in pajamas on the back porch, huddled close together in the Boston cold, sharing a celebratory joint after one of us got a full-time job post-graduation.

Except, it was hard to celebrate when we kept looking over our shoulders. We froze our sesh when a neighbor came out with their dog because we knew this cluster of apartments were all owned by the same landlord, thus we all shared the same lease—which prohibited smoking. Not wanting to risk smoking in our apartment and unable to smoke in public, we accepted the risk of the back porch, and passed the joint quickly round.

In 2016, a ballot question known as “The Massachusetts Marijuana Legalization Initiative” legalized the sale and possession of maijuana in small amounts. While recreational dispensaries have been increasingly popping up around Massachusetts and Boston since 2019, there still isn’t anywhere to smoke.

Massachusetts law dictates that it is illegal to smoke in public places, which leaves renters and people in public housing with nowhere to legally blaze. While the initiative included social cannabis licenses, there has been little action by Massachusetts Gov. Charlie Baker beyond pushing the plans to create social smoking spaces and introduction of social cannabis licenses to Massachusetts properties further and further back. Other states that have legalized the sale of cannabis have also promised to open cannabis cafes, though there has been little action, aside from one which opened in Los Angeles in 2019, which has since been thriving.

The Los Angeles cafe offers a wide menu of cannabis treats and products, but it also serves seasonal dishes complimentary to THC’s effects. The cafe also offers “tableside flower service,” in which a “flower host” comes to your table and to talk about the different strains offered and their effects. There’s even a non-smoking patio for people to enjoy wine and beer with their meal instead.

It’s not quite as casual as the coffeeshops known in Amsterdam, where patrons can openly smoke inside, but The Original Cannabis Cafe is a first-step towards cannabis-friendly spaces where it is legal to smoke and sell cannabis.

My roommates and I reminisced about those Dutch coffeeshops on our back porch, remembering the semester we spent at Kasteel Well and about the days we spent in coffee shops, smoking and relaxing. After the decriminalization of cannabis in Amsterdam in 1976, coffee shops became one of the largest tourist industries. My roommates and I joked about the joint we learned to roll and the chill atmosphere that accompanied all shops. Most coffeeshops have you buy a drink or food along with the cannabis product, as the cannabis in Amsterdam is known to be much stronger than what American tourists are used to —a result of larger amounts of THC that growers have spent years cultivating. While cannabis isn’t legal in the Netherlands, it has been decriminalized and regulated through coffee shops since 1976. There was something unique in sitting on a patio, drinking a hot cup of tea while sharing a joint.

My roommates and I laughed about our naivety the first time we went to a Dutch coffeeshop. Our abroad program had warned us that some places didn’t sell to foreigners, and when we stepped up to the counter and asked in broken Dutch for a pre-roll, the budtenders gave it to us without a second thought—though we did get a few weird looks.

Being in a coffee shop for the first time was a surreal experience, as someone who always hides their smoking habits. Coffee shops are seen as a place of relaxation, and many people treat them like real cafes and go there to socialize, do work, or just read a book. Coffee shops and cannabis culture in Amsterdam is inviting, and as my roommates and I passed the celebratory joint between us, we reminisced and tried not to think about how, unlike in the welcoming Dutch coffee shops, we were risking eviction to smoke.

The Cannabis Commission Control, which controls the licenses to social consumption establishments, launched a pilot program in 2019, making the first steps towards breaking ground on a cannabis cafe in Massachusetts; however, it will still take years for an actual cafe to open under this program and most of the timeline is still unclear.

My roommates and I, standing on our back porch, think about how we have taken easy access to cannabis for granted, and how there are numerous families and people in the city struggling to toke as they please. Hopefully, Gov. Baker will get on to baking soon.