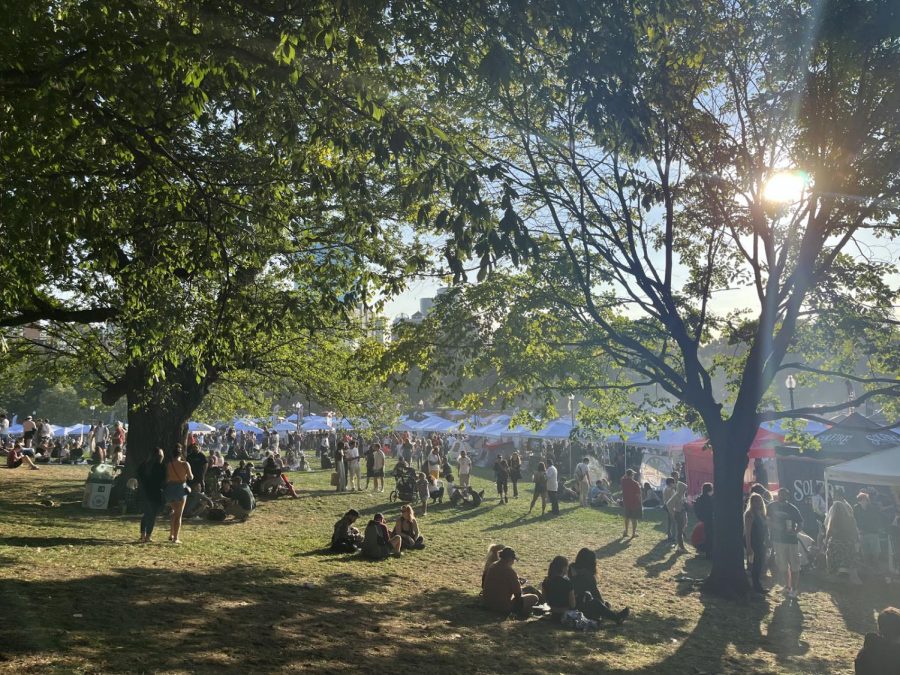 Overlooking the tents at the Boston Freedom Rally.

By Bishop Marshall and Sabrina Lam

The Massachusetts Cannabis Reform Coalition hosted its 33rd annual Boston Freedom Rally in the Boston Common Saturday, known by most attendees as “HempFest.”

Originally, the coalition’s mission was to legalize the growth and sale of cannabis products. Despite the legalization of recreational marijuana use nearly six years ago, Averyl Andrade, president of MassCann, and others say the fight isn’t over.

“Now it’s more about creating an equitable industry because it’s legal, but it’s not fair,” she said. ”A huge portion of our industry is multi-state operators while our little guys aren’t able to get involved.”

In 1992, MassCann gathered 14,000 signatures for a petition to create a therapeutic marijuana research program. In 1999, the group gathered more than 20,000 signatures petitioning the decriminalization of recreational marijuana use.

“We as voters need to hold our elected officials accountable,” Andrade said. “Most of our politicians are only on our side when it helps them.”

Andrade points to the state putting “financial constraints on the industry” as MassCann’s biggest issue.

“[Restraints] just create money and revenue for the state,”  she said. “It makes [getting into the industry] an unattainable goal for your standard mom-and-pop shop.”

The festival aims to promote small businesses. Local vendors were the first to set up tents in the early days of the festival, taking the risks head-on before legalization. Some vendors and participants requested to remain anonymous due to the stigmatization of drug use in the U.S.

“Anything dispensary-wise has to cater towards recreational use just for profit…all these companies who were built off the medical patient just sort of said screw you,” said a vendor for Beyond Hype Seed Co.

Only multi-state operators, like Curaleaf and Truelieve, have the revenue to keep up with the legislative standards pushed on the industry.

“When we open [growing rights] to [multi-state operators], they don’t care [about the community] because it’s not their home,” Andrade said.

Those who took the hit from strict marijuana legislation and those affected personally by the war on drugs often struggle to reap the benefits of their labor.

Along with spreading awareness about the corporate cannabis industry, many of the vendors also celebrated the significant impact that the legalization of marijuana had on their careers and personal lives—even though the drug is only legal for recreational use in 20 states.

A local vendor working the Helios tent was 16 when he was arrested in possession of marijuana. After his release, he worked in kitchens before eventually moving to Maine to pursue a career in the cannabis industry.

A vendor at the Lucky Ladies Cannabis Delivery told a similar story of asylum.

“I am personally a victim of the war on drugs, and I can’t live in a state where [weed] isn’t legal,” she said.

Great passion for the issue stems from those who have been personally victimized by the criminalization of marijuana.

According to the vendors at Potcast, “the only reason [marijuana] was horrible is because it was illegal; that’s the only reason it fucked anybody over.”

Unlike the vendors, the younger attendees showed up with a different priority in mind. Out of the thousands of people in attendance, only a tiny fraction—almost all of whom were of older generations—sat in front of the education and activist panels.

Many groups set up blankets and tents on the grass fields, listening to live music, shopping through the extensive collections of bongs, pipes and, hemp bags, enjoying traditional fair food, playing games for free weed-infused prizes, and smoking with friends.

Joey Terwilliger, a 24-year-old Worcester Polytechnic Institute graduate, came to Hempfest with a large inflatable tent and eight of his friends.

“One of my buddies was like, ‘You have to come to town and bring the tent again’ because we did this on April 20th,” he said.

In the height of all the excitement, many college students kept marijuana legalization in mind, recognizing the underlying message and advocacy of the rally. Christian Jones, first-year writing, literature, and publishing student at Emerson College said cases of non-violent marijuana use or possession should be re-evaluated.

“It wouldn’t make sense to have them in jail while [weed] is being legalized throughout the country,” he said.

First-year Boston University engineering major Jamie Dykstra continues to protest the current regulations at her school and many others in the Boston area.

“[Marijuana] should be allowed on campus for people over 21 as long as it doesn’t disturb others,” Dykstra said.

Regardless of priority, MassCann appreciates all forms of support from the community.

“It’s not hard to get more involved in supporting the cause,” Andrade said. “You don’t have to do much to help your community, to step up and say, ‘Hey, this is wrong,’ you don’t have to be a cannabis consumer either… every single letter [to legislators] counts.”