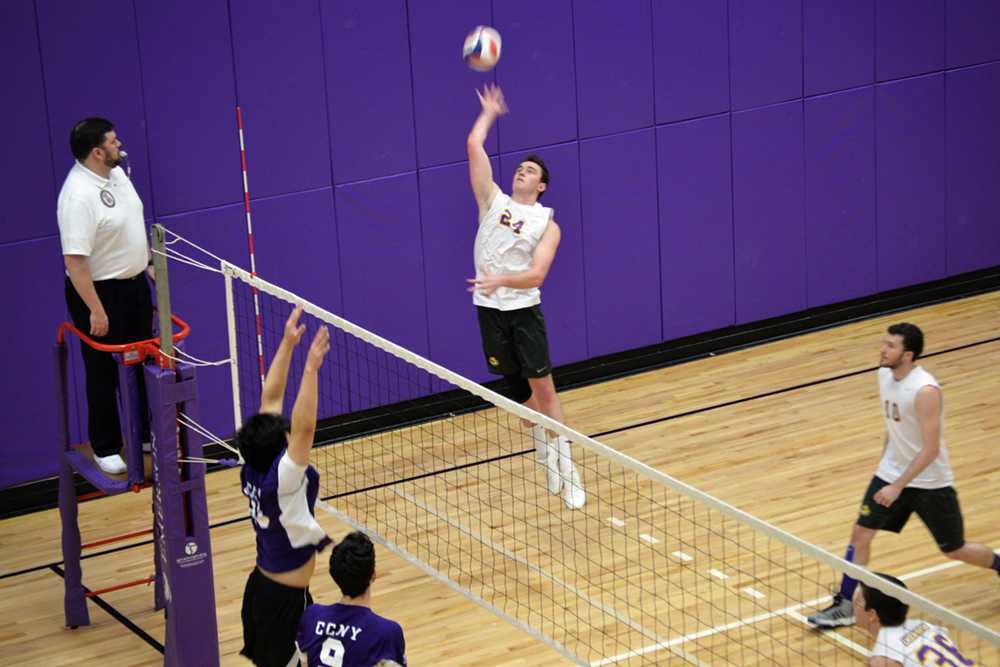 As the men’s volleyball season starts to pick up, senior Brendan McGonigle continues his past tradition of being one of the strongest setters in the Great Northeast Athletic Conference.

McGonigle, a marketing communication major and one of two captains, defined himself as a force in the conference. He topped the GNAC in assists per set at the beginning of the year with an average of eight, and is currently ranked fourth with an average of 8.20.

“Brendan has to, and does, bring a lot to the team,” head coach Ben Read said. “Our offense completely depends on him. His decision making, his location with the ball, everything goes through him.”

Read also said McGonigle’s size—the setter is listed at 6-foot-3-inches—and athleticism benefits not only his own statistics, but the Lions’ record, too.

“He has one of the highest reaches on the team,” Read said. “He can get to a lot of balls that maybe some other shorter setters can’t get to. In the last few years, he’s been one of our top blockers. We have a bigger advantage having him in the front row.”

Read and his team have posted a .500 record, falling to Massachusetts Institute of Technology and Daniel Webster College. They most recently won against Endicott College on Tuesday.

McGonigle said the team wants to achieve something they never have before this season.

“Of course we want to win the GNAC conference and make the NCAA tournament,” McGonigle said. “But we would also like to be the first team in program history to host a playoff game.”

Most of Emerson’s teams compete in the New England Women’s and Men’s Athletic Conference, which does not have a men’s volleyball program. This means the Lions must compete in the GNAC, where the college used to play.

McGonigle said he thinks he benefits from his playing experience. He’s one of only two senior setters in the conference.

“I think that being older helps with my overall knowledge of volleyball,” he said. “I see myself contributing to the team as a leader who can use his experience to make the best decisions when the game is on the line.”

Senior captain Jared Gross, a marketing communication major, said he’s proud of how hard McGonigle has worked leading up to his senior year.

“He’s switched his number to 24 so that he and Kobe Bryant, two greats, can retire the same number in the same year,” Gross said. “Brendan is just trying to [be successful].”

Since the season just began, the team can still get a little more situated, according to Read.

“We are optimistic for our future success,” Read said. “Based on what [McGonigle] has been doing on the court so far in practices and in game situations, we are expecting more of the same strength from him.”