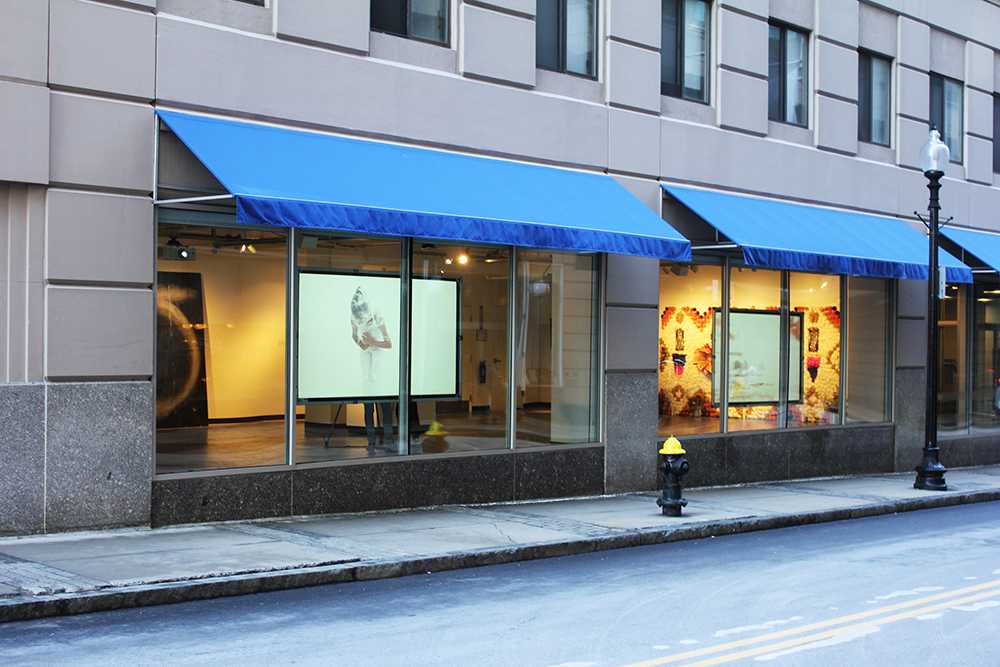 Last October, Emerson expanded its visual art presence by opening the Media Art Gallery on Avery Street next to the new Equipment Distribution Center. The public gallery, the only one in Downtown Boston, deepens Emerson’s ties to the theater district.

Robert Sabal, the dean of the school of the arts, helped advocate for the Media Art Gallery and gathered support in getting the college to identify a spot for graduate student and faculty work.

“We have a large visual and media arts department,” Sabal said, “but had no opportunity to showcase the work of faculty and students to the public, other than the Bright Family Screening Room for film screenings. A lot of grad students and faculty are working in the visual arts in more traditional art forms, and we didn’t have a space for them.”

Joseph Ketner, the director of Emerson Urban Arts, said that he was tasked with finding a public location to showcase performative and media art in line with the academic profile of Emerson.

The gallery displays professional-level work that Ketner said he feels students and professors should see in order to be leaders in media art. The venue will soon contain Emerson MFA thesis work in film and media art, which was formerly housed in the Huret & Spector Gallery on the sixth floor of the Tufte Building.

In order to fund the project, Sabal worked with other faculty, especially Ketner, to attain a grant from the Massachusetts Cultural Council Facilities Fund, which was then matched by the college. It took them two tries to be selected for the grant, Ketner said.

The process of opening the location began in spring 2014, when the idea came up as a priority at a meeting of school of the arts faculty.

Sabal said he knows undergraduate students are also looking for more places to display their own work.

“We are on the lookout for more space where undergrads can curate other undergrads work, because student curation is really important,” Sabal said. “The Huret & Spector Gallery has more room now for undergraduate student work as it is reprogrammed.”

The inaugural year of the gallery saw work from Oliver Herring with his Areas for Action exhibit in November, to the most recent show featuring work curated by Emerson undergraduate students.

The current exhibit, “NO ONE will tell me who I am,” was curated by Ketner’s undergraduate upperclassmen seminar class, What is Contemporary Art? It features work from graduate artist studios at Massachusetts College of Art and Design, the School of the Museum of Fine Arts at Tufts University, and Boston University.

“The current exhibition deals with the very subjects we’re talking about now, this crisis of identity and immigration,” Ketner said.

“Video Jukebox,” a permanent feature of the space, projects Emerson faculty work including animation, new media, and film, and allows guests to pick and choose what they want to watch from a nearby touchscreen.

Abby Baldwin, a sophomore visual and media arts major, said she thinks the gallery is a great addition to campus. She visited when Oliver Herring’s work was on exhibit and found herself there again this week for a film project.

“We don’t have a lot of spaces for more traditional art, and I think it provides good exposure for students who are missing out on that,” Baldwin said.

“She’s really brilliant,” Ketner said. “She’s one of the leading digital artists of our generation.”

“Entangled” consists of projected images on three large, semi-transparent screens hanging in the two-story building. A computer detects the viewer’s presence, allowing visitors to manipulate the image and create artwork with their bodies.

“I can assure you, you will see something new every time you go in there,” Ketner said. “I’m rather confident that the experience will be a memorable one.”