Menino remembered as friend of Emerson 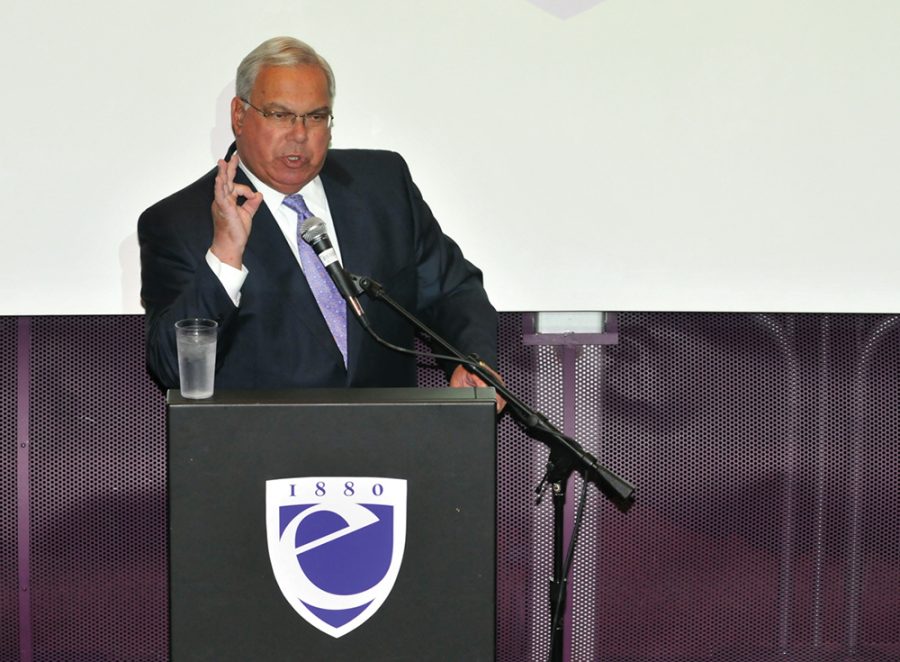 By Rory Sheil, The Berkeley Beacon

Thomas Michael Menino, Boston’s longest-serving mayor, left behind a legacy that has helped make Emerson the campus students recognize today. His death on Oct. 30, which came after a year of battling cancer, gave members of the Emerson community, past and present, a chance to reflect on all he did for the school.

Menino, who served as mayor of Boston for five consecutive terms before announcing that he would not be seeking re-election in 2013, was renowned for his work ethic and contributions to the revitalization of Boston’s economy, neighborhoods, and cultural centers.

“He was invested in neighborhoods, and invested in improving those neighborhoods,” said President M. Lee Pelton in an interview. “He understood the power and the value of the creative economy, and in downtown Boston that power was in full evidence.”

One of the Menino administration’s significant projects was the cleanup of the downtown area and Theater District around what is now Emerson’s main campus. By working with Emerson’s previous president, Jacqueline Liebergott, Menino helped facilitate Emerson’s move from Back Bay to Boston Common.

“We both saw that moving the college could solve many problems,” Liebergott wrote in an email to the Beacon. “The college could gain the amount and kind of space it needed. The city could put some of the most desirable brownstones back on the market and attract wealthy taxpayers to the revitalized Back Bay and Beacon Hill. The city could partner with Emerson and restore the then run-down Theater District.”

Prior to Emerson’s relocation, the Washington Street Theater District was known as the “Combat Zone,” marked by its dilapidated collection of bars, X-rated movie theatres, strip clubs, and other varieties of adult entertainment.

In an effort to expand its facilities, Emerson purchased its first downtown property in 1992 at 180 Tremont St., now called the Ansin Building.

One year later, Liebergott assumed her role as Emerson’s president. Her tenure began at a tumultuous time, one in which the school was struggling financially after a failed attempt to move the college to Lawrence, Massachusetts, and the administration was divided on the next steps for the college.

With the help of Margaret Ings, Emerson’s associate vice president of government and community relations, the Liebergott administration submitted a 10-year proposal to the Boston Redevelopment Authority that outlined a plan to move Emerson to the Theater District.

Liebergott said the college had the support of Menino, who had just become the mayor of Boston and saw Emerson’s potential to revitalize the once prominent Theater District.

“He told me he liked the college, because when we took on a project, we got it done,” Liebergott wrote. “He also said and meant that he would help.”

Liebergott called the transition to the new location a bold move.

“The risk was all ours,” Liebergott wrote. “If we left the old campus and hit delays or other problems, the college might fold.”

In 1994, after the college’s purchase of the Little Building at 80 Boylston St., Liebergott said Menino approached her and insisted she commit to moving the whole college to the area.

Over the course of his mayorship, Menino and his administration worked in tandem with Emerson to see the restoration of the Cutler Majestic Theatre, the reopening of the Paramount Center, and the creation of the Tufte Performance and Production Center.

Pelton said Menino would call and check in on how the move was going, offering assistance if needed.

The Menino administration would also go on to partner with the college during the creation of the Emerson Cafe on Boylston Street and the restoration of Rotch Playground, the field that Emerson’s sports teams use to this day.

“The mayor has always been one to help others,” said Ings. “He truly was one for partnerships.”

Emerson’s website estimates that the school spent $450 million on properties and renovations in the Theater District.

“The new mayor was smart and competent and impeccably honest,” wrote Liebergott. “We relied on him.”

It is Menino’s love for his job, the city of Boston, and his residents that defined his legacy to the people that knew him, according to Pelton.

“He wasn’t using his office as a platform to another job,” Pelton said. “This is what he wanted to do. His vision was that the connectivity between individual people could change the city, and he was right.”

According to a poll by the Boston Globe, Menino was famous for having met at least half of the citizens of Boston—including several members of the Emerson community.

Kristina Carroll, a junior journalism major, said she met Menino several times as a child. Every year, her Irish dancing group would perform at a St. Patrick’s Day breakfast that Menino attended. Carroll said he would thank them every year and tell them he was happy to see them again.

“When I was younger, it never really occurred to me how powerful he was, because he just talked to us like a normal guy,” Carroll said.

In 2010, while speaking to Emerson students in the Bill Bordy Theater, Menino spoke about how he enjoyed communicating with Boston’s youth, according to Emerson’s website.

“I like to talk with young people. I like telling people about our city, so you’re not a stranger. I want you to be part of this city,” Emerson quotes Menino as saying. “Maybe you’ll want to remain here after you graduate.”

Michelle Nigro, a 2012 Emerson graduate, said she met Menino while working on a journalism project as a senior. She said Menino was a friend of her grandfather, the head of a building trade union, who set up the meeting.

“[Menino] was a really nice, down-to-earth, friendly man,” Nigro said. “He took time out of his day to talk to me for a class project, something that didn’t even matter.”

Nigro said that when he didn’t know about a topic she asked him about, he called in the city official who was familiar with it.

Liebergott recalled being at Faneuil Hall after Menino had secured his first mayoral race in 1993.

“The Christmas season was beginning,” she wrote. “As we talked, the Christmas lights in Faneuil Hall went on. The mayor jumped up and ran to the window. His face aglow, he announced to me, ‘I love this city.’ And as we all learned, he meant it!”