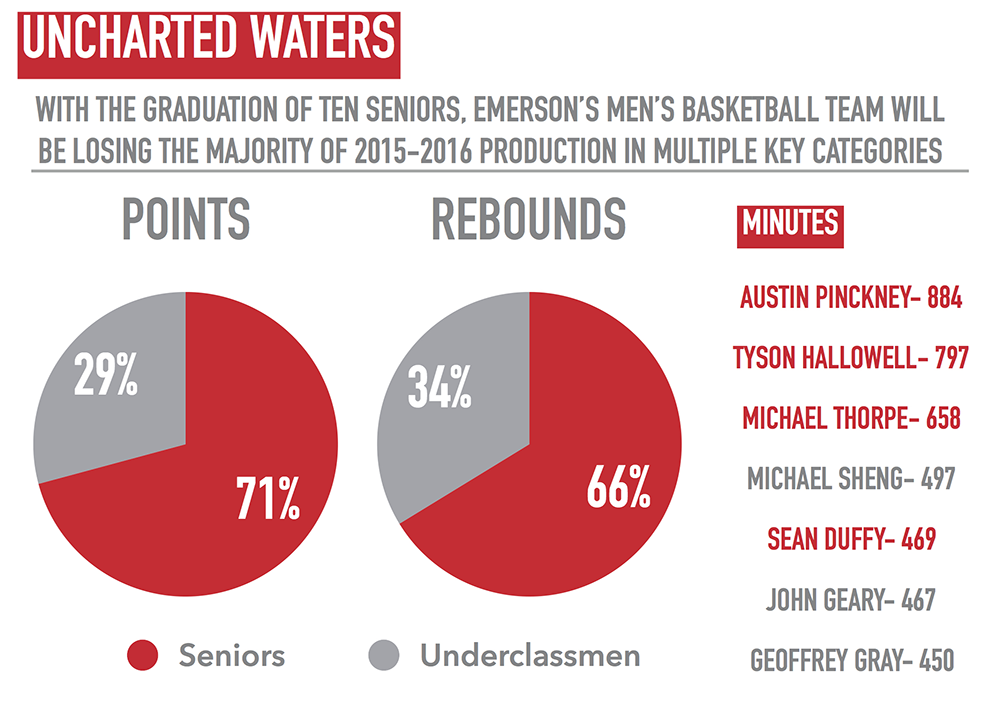 One thing Emerson’s men’s basketball team can’t control—the departure of nine seniors after the Lions came within five points of the NEWMAC finals in February. But this year, hoping to make another deep playoff run, coaches and players are focusing on some things they can control: toughness, rebounding, and defense.

“I’ve always believed you get good offense from defense,” head coach Bill Curley said. “You’re in the game, you’re battling, it makes your offensive game that much easier. It gives you that confidence. That’s why we’re trying to stress it.”

Last season, with seniors scoring 71 percent of the Lions’ points on offense, the team showed the ability to compete regardless of opponent. Emerson defeated NEWMAC stalwarts MIT and WPI, and pulled off a trifecta in beating Springfield twice in the regular season, and again on the road in the NEWMAC quarterfinals.

In fact, it was against weaker conference teams that the Lions ran into trouble. The NEWMAC playoffs feature the top five teams in an eight-team league, and Emerson finished 1-5 against the three schools that failed to reach the postseason—Coast Guard, Clark, and Wheaton.

“Sometimes those games are tough, but it shouldn’t be,” he said. “You’ve got to be ready to play every single game and the NEWMAC is very close. We beat three out of the top four teams in the league last year, and then we did lose to some of those lower guys, which you just can’t afford to do.”

The NEWMAC’s annual pre-season coaches’ poll, released on Nov. 10, projects the Lions as the fifth and final playoff team—the spot they secured last year. That should be validation for Barrett, who said the loss of a core group of starters does not equal lower expectations.

“We’re not rebuilding,” Barrett said. “That’s not where we’re at. We think that even the guys we have returning that got a lot of minutes last year, these guys are ready to step in.”

Curley said he carried a larger-than-usual roster in 2015 in anticipation of departures like Michael Thorpe, Tyson Hallowell, and Austin Pinckney. The roster size was trimmed from 19 last year to 14 this fall.

While Curley hasn’t yet determined his go-to starting lineup, he said sophomores Geoff Gray and Mac Sashin as well as juniors John Geary and Michael Sheng will be staples on the court. Geary was named a captain, along with senior Jared Kortsen.

Barrett said Gray will have a noticeably larger role. Among Lions returners, the point guard was tops in rebounds last year with 86.

Kortsen said rebounding will be more of a team concept than it has in the past. Pinckney led the conference in rebounds each of the last two seasons before graduating this spring.

“Even though we’re smaller, we’ve got guys who really want to go in and get the ball,” Kortsen, a marketing communication major, said. “Last year, we only had that one guy, Austin [Pinckney], who really controlled the boards. This year, five guys on the court are crashing defensive boards.”

Thorpe, Hallowell, and Pinckney dominated team minutes last season, with sixth man Sean Duffy also finishing fifth in the category. The only underclassman to crack the top five was Sheng. Kortsen said Sheng will be the X factor this year.

“No one in the NEWMAC can guard him when he’s on,” Kortsen said of Sheng. “When he’s on, he’s on. Sometimes when he’s not playing so well, he’s drifting off, but this year I haven’t seen any of that. He’s been more consistent. He’s got probably the best crossover in the league.”

The Lions will also look for more consistency from Sashin. At times, he dominated in the paint, scoring eight points in nine minutes against the University of Massachusetts Boston in December, and eight points in 12 minutes against Suffolk in January. The 7-foot-1-inch sophomore has the height advantage against nearly everyone he grapples with down low.

“He’s been playing really well in the post—very good seals, good rebounding, his hook’s been really key for him,” Mrusek, a marketing communication major, said. “That’s his go-to move. He’s just been scoring at will.”

Curley did not sacrifice height when recruiting for 2016. Each of the Lions’ three recruits—Mrusek, Ben Holding, and Kent Ellertson—is listed at 6 foot 6 inches.

Mrusek seems most likely to see significant minutes off the bat. Curley said he’s one of the best post players he’s worked with, an attribute that could line him up to see some of Pinckney’s minutes. Curley said Mrusek also features a solid jump hook shot with both hands.

Mrusek, a product of Point Pleasant Beach High School in New Jersey, said Sashin will help free up room in the paint.

“Mac [Sashin] will have the biggest guy and I’ll have a shorter guy on me in the post, so it will definitely be an advantage for me,” Mrusek said, “because I feel like there’s not many people that can stop me in the post.”

Mrusek said Holding’s strength is the three-point shot, and Barrett said Holding has earned the nickname “Benny Buckets” in the locker room for his scoring ability. Curley envisions the Dartmouth High School grad as a small or power forward.

Ellertson, who graduated from Beaver County Day School in Chestnut Hill, also brings a good shot, and should see time playing point on offense. Mrusek said Ellertson’s basketball IQ sets him apart, and he makes smart passes. Because of his height, Curley thinks Ellertson adds a dimension to the defense, and could even see time at small forward.

Barrett said the freshmen contribute to the versatility of the roster.

“We’ve got bigger guys and they can play multiple spots on the floor, which allows us to do a little bit more and play different styles,” Barrett said. “We can play really big or we can play small and quick.”

The Lions’ schedule is such that all non-conference games are played before the new year, and once January rolls around, they begin their entire slate of NEWMAC games. Mrusek said that could benefit the freshmen as they look to get their feet wet, and the non-conference schedule will be no joke, with a game in Providence against Division I Brown University on Dec. 9.

Emerson kicked off its season participating in the Coaches vs. Cancer Greater Boston Shootout on Tuesday and Wednesday, and came away 1-1, defeating Wentworth 73-57 and losing to Pine Manor 84-82.

The Lions will play at Suffolk and Tufts before returning home to face Dean College on Nov. 30. Curley said he expects the extra work players have put in on the side this fall to show on the court.

“I think it’s the type of guys that we’re trying to search for,” Curley said, “that understand that you can study and you can play and you can have a college experience at the same time, and have basketball be a little higher on their priority list than ten or twelfth thing to do, and not have it be a play date.”