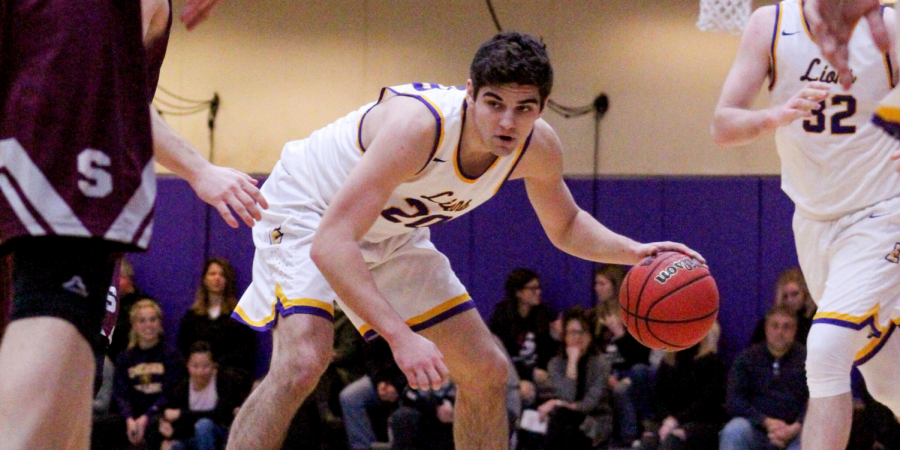 Ben Allen scored four points and pulled down three rebounds in the win over Springfield.

The men’s basketball team defeated nationally-ranked Springfield College on Saturday by a score of 74-70 in a stunning last-minute victory.

Springfield came into this matchup as the 19th ranked team in the country, and also boasted the New England Men’s and Women’s Athletic Conference’s leading scorer Jake Ross.

The Lions trailed 32-33 at the end of the first half. Springfield totaled 17 personal fouls in the half, and the Lions made four of their 19 shots. Freshman guard James Beckwith came off the bench to score 15 points, making all five of his three-point attempts.

“Anytime you got your best player Jack O’Connor and allow foul trouble in the first half you’re going to be upset, and you want to see consistency,” Lions head coach Bill Curley said in a post-game interview. “I’m sure we fouled a lot, I can’t complain that we don’t foul, but I don’t think the other team doesn’t foul either.”

After only making one shot in the first half, O’Connor made seven of his twelve shots in the second half, including four three-pointers.

“I knew in the first half I had a lot of adrenaline and was a little too energetic, in the second half,” O’Connor said in a post game interview.

The Lions’ scoring surged in the second half, and the team made 59 percent of its shots.

Curley said sophomore guard Nate Martin did a great job slowing down Ross, with the Pride’s star player missing all five of his shots in the second half.

The game’s final minutes ended in dramatic fashion. O’Connor made an acrobatic layup through contact to give the Lions a four-point lead. Another opportunity in transition from sophomore guard Zach Waterhouse ended in a trip to the free throw line.

Following two missed free throws, the Lions managed to hold onto their slim lead amid three three-point attempts from Springfield.

A rematch of 2019’s NEWMAC semi-finals, Emerson has now won back-to-back matchups against the Pride.