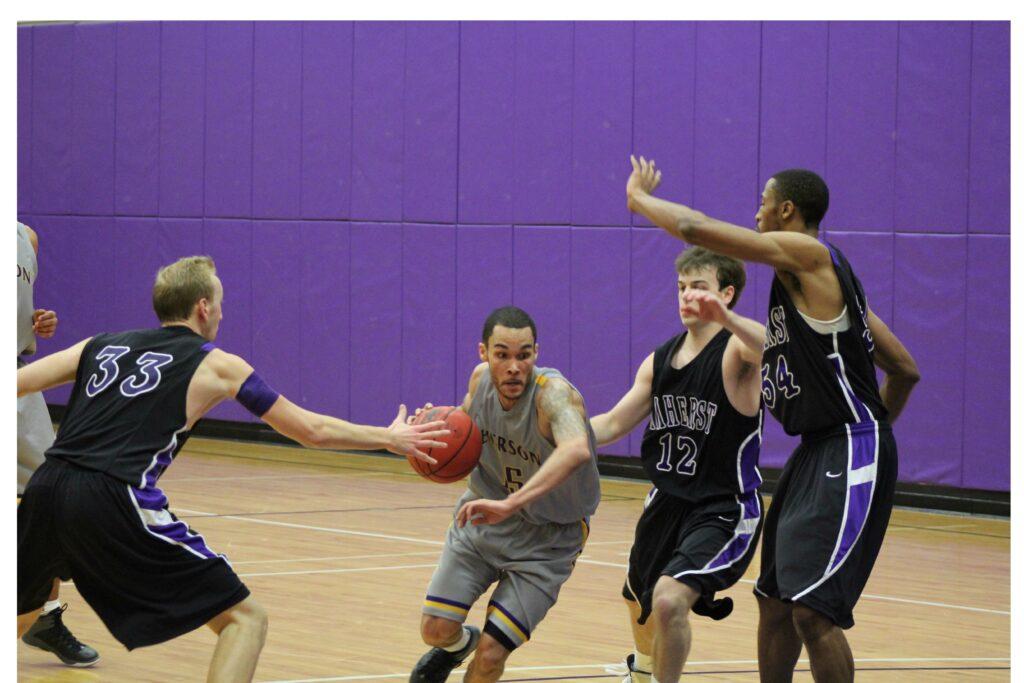 Jim O’Brien’s tenure at Emerson College has come with its ups and downs. The former Division 1 head coach has been at the helm of the Lions men’s basketball team for two-plus seasons, with plenty of highs and lows.

Satuday afternoon on their home floor in Boston, O’Brien and his squad certianly rewrote his script with an exclamation point.

Facing Amherst College, the reigning Division 3 champions, and ranked the No. 1 Division 3 team in the nation this season by d3hoops.com, Emerson pulled off an upset on par with any other in the program’s past, snapping the Lord Jeffs’ 29-game win streak with a 91-79 victory at Bobbi Brown and Steven Plofker Gym.

In a non-confernece tilt, the Lions (6-3) did everything they could to dimsantle the visiting Jeffs (5-1), taking advantage of a balanced scoring attack and a raucous home crowd en route to one of the most surprising victories across all of college basketball this season at any level.`

Sophomore Michael Thorpe led the charge for Emerson, scoring 19 of his 26 points in the second half, shooting 9-17 from the field, and connecting on three 3-pointers.

The teams played an even first half and went into the intermission with Emerson leading, 44-41. In the second half, the Lions were able to maintain their advantage by spreading out the scoring. They threw the ball into the post early-and-often, then stretched the floor with solid perimeter game to keep Amherst from cheating inside on defense.

Amherst had defeated each of its opponents by 24 points or more all season, but O’Brien’s side showed no signs of intimidation against the top-flight competition, playing tenacious defense and an in-your-face brand of basketball all 40 minutes.

In the end, it was Emerson who led the rebound battle, 40-26, and fed off the energy of its fans to send Amherst packing.

While the Jeffs tried to stage a late comeback, Emerson continually threw the ball into the post to sophomore center Brian Hurley or Duffy, who had no problems getting to the rim against a tall Amherst frontcourt whose shortest forward is 6-foot-8.

Amherst elected to foul late to try to extend the game, but Emerson stepped to the line and hit 10 of 12 free throws with under two minutes to play to ice the upset.

Emerson led by as many as 11 points in the second half, but while Amherst was able to cut that advantage to within one point with 10 minutes to play. Emerson responded with a 10-0 run of its own over the following five minutes. The runs started and finished with 3-pointers by Thorpe to give the Lions their largest of the afternoon, 73-62.

With seconds left to go on the clock, an elated Emerson bench began to stand up and cheer, feeding off the energy of the packed gym, as the Lions pulled off their biggest win in recent program memory.