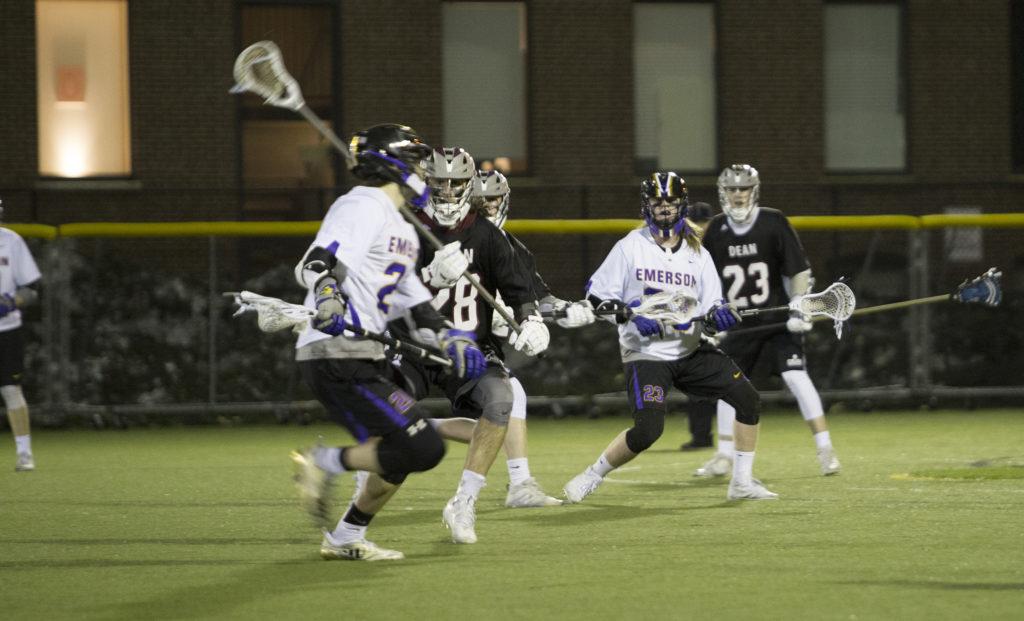 The Emerson men’s lacrosse team began conference play in the New England Women’s and Men’s Athletic Conference with a tough 28-6 defeat to Springfield College on March 30 after losing multiple key players to injuries early in the week.

In Emerson’s 10-6 loss to the University of Massachusetts Dartmouth on March 28, freshman defender Spencer Clark suffered an ACL injury that will sideline him for the remainder of the season. Junior Bailey Kennedy—the team’s only goalie—suffered a concussion that kept him out of the Springfield tilt. Freshman defender Jiwon Kim also left the game in a walking boot following a nasty collision late in the second half.

Head coach Matthew Colombini said he’s had no trouble finding replacements for the players that are out.

“They’re pretty big blows,” Colombini said. “It’s some talented guys and starters that are hurt but we just have a next-man-up mentality. Everyone’s just banding together and everyone is willing to do a little extra.”

Freshman defender Lucas Sickner stepped up to replace Kennedy in goal for the game against Springfield and made six saves. Colombini said Sickner volunteered to play goalie even though he hadn’t played in net since his middle school lacrosse days.

“[Sickner] volunteered and we got him some shots today to get him ready,” Colombini said. “He came out a couple hours early and got in over an hour of work and he played pretty well against a tough opponent.”

“I think surprisingly our morale was up,” Radenberg said. “We kind of went out with [a mentality] like we have nothing to lose right now. I think we’re just keeping our spirits up because it’s obviously tough.”

The Lions got off to a solid start in nonconference play, going 4-3 to open the season outside of the NEWMAC. The team picked up their first win in a 13-12 double-overtime contest against Mount Ida College in the season opener. Junior attackman Jared Brush led the Lions with five goals.

Radenberg said although they were successful in their nonconference games, their upcoming NEWMAC games would be no easy task.

“We have a young team right now and we came out surprisingly well,” Radenberg said. “I think in the conference it’s going to be really tough because it’s a tough conference and we’ve had a tough week of losing a couple players. We just need to do all the right stuff and play as hard as we can.”

Colombini said he wants the team to continue to build on what worked during their nonconference games to help the team succeed in the NEWMAC.

“We really just want to keep running the same stuff and stay sharp with it,” Colombini said. “I think as we got into some tougher games and [as we] kept playing nonconference we kept [playing] a little bit better so we just want to keep improving and keep putting those guys in positions to be successful.”

Emerson’s attack is off to a hot start this season thanks to strong performances from Radenberg, Brush, sophomore Austin Franklin, and freshman Joe Meyers. Radenberg leads the team in points with 27 off of 11 goals and 16 assists, while Brush leads the team in goals with 17. All four attackmen combined for 69 points in the team’s opening eight games. Colombini said the success from his attack comes from the team’s playing style.

“Our attackmen, with the way we run our offense, they need to score goals. That’s the main part of their job and they’ve done a great job with that,” Colombini said. “They all put in a ton of work before the season started to make sure that they were in shape and ready to compete for 60 minutes a game. We don’t rotate those guys out much, so they just got themselves ready [for a large workload]. They get a ton of reps in practice and its carried over.”

The Lions added a number of fresh faces to the squad this season, with eight freshman and three sophomores playing their first seasons in Emerson jerseys. Meyers and freshman midfielder Stevie Powers have played key roles on the team and find themselves in fifth and third in scoring on the team respectively. Powers is fourth on the team in goals and third in assists, while Meyers is second in assists.

“We’ve asked all those guys to play a lot. They’re over half our team and they’ve ran with it,” Colombini said. “They have their freshmen moments that are frustrating, but for the most part they execute and they listen and they’re getting better every day and that’s all we can ask from them.”

The Lions next face nonconference opponents Purchase on April 4 at Rotch Field. The game is set to begin at 6 p.m.