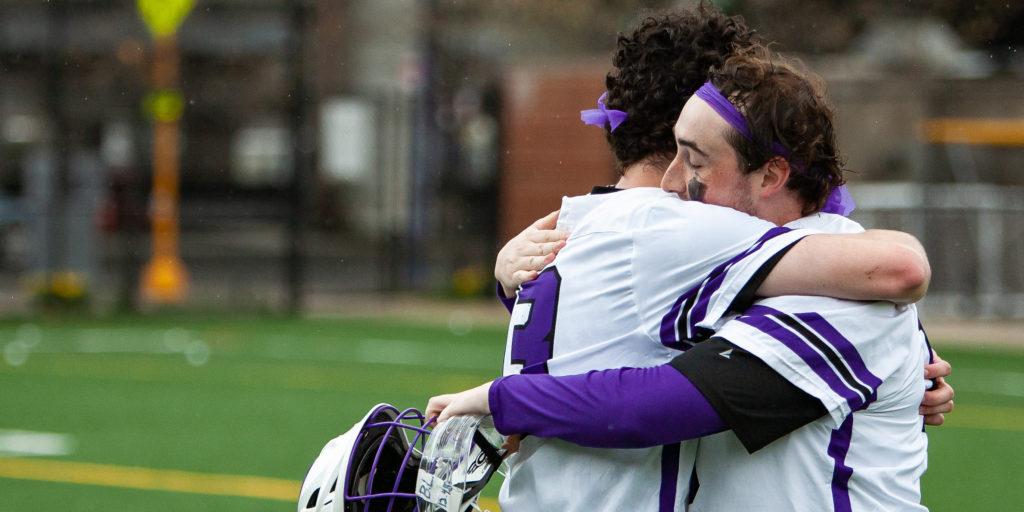 The men’s lacrosse team won its first conference game in program history since 2014 after a 7-6 victory over Wheaton College at Rotch Field on Saturday afternoon. The win came off of a game-winning goal by freshman midfielder Skyler Celotto in overtime and sent the crowd into an uproar.

Head coach Matt Colombini praised the players for their hard work and dedication to the program.

“Getting the first win in program history after six years of being in the NEWMAC is a testament to how hard the guys work and they deserved and earned it,” Colombini said. “We were 0-39 in NEWMAC games before today but they showed their dedication to the program by fighting for this win.”

The Lions hold a 3-12 overall record this season and a 1-4 record in conference play, which places them in sixth place in the conference with two games left to play. The team must win its final two games in order to be in contention for one of the five NEWMAC playoff spots.

The first quarter was a defensive battle with only one goal scored by Wheaton attacker Pete Chisholm. In the second quarter, Wheaton broke away by scoring three goals in the final three minutes to take a 4-0 lead at halftime.

The Lions scored two goals off of a man-up opportunity after a Wheaton penalty in the third quarter. With two minutes left in the third quarter, junior attacker Austin Franklin fired a goal past Wheaton goalkeeper Chandler Miller to bring the Lions within one goal of the lead heading into the fourth quarter.

The fourth quarter was a back-and-forth contest as the teams traded goals until Wheaton attacker CJ Leighton tied the game at 6-6 with 30 seconds left in regulation.

In overtime, Celotto, who had three goals in the game to bring his total up to 27 for the season, netted the game-winner with five seconds left on the clock.

Colombini expressed his gratitude toward the seniors for their dedication and impact on the program.

“They mean the world to the program,” Colombini said. “When I got here and they were sophomores things were really bad. But they bought in right away and helped change the culture and drove the team forward by being great leaders on and off the field.”

Gutierrez said he is grateful for all that Emerson lacrosse has taught him and for the victory.

“It means a lot to work so hard and get a win on your senior day not only for ourselves but for all the people that came before us and all of the people that I have learned from my four years in the program,” Gutierrez said. “This team is a family and through the thick and thin we still have each other so I will cherish moments like these for the rest of my life.”

As he prepares to graduate, Brush advised the returning players to never stop working hard.

“Of everything I’ve learned I would just tell the guys to keep fighting,” Brush said. “The whole team has to stick together and keep fighting and working hard. Throughout my whole Emerson career we just kept fighting year after year and getting better and better, so don’t give up and keep pushing through.”

The Lions play their final two games of the regular season against the United States Coast Guard Academy at 7 p.m. on Wednesday, April 24 and the Massachusetts Maritime Academy on Saturday, April 27 at 4 p.m.