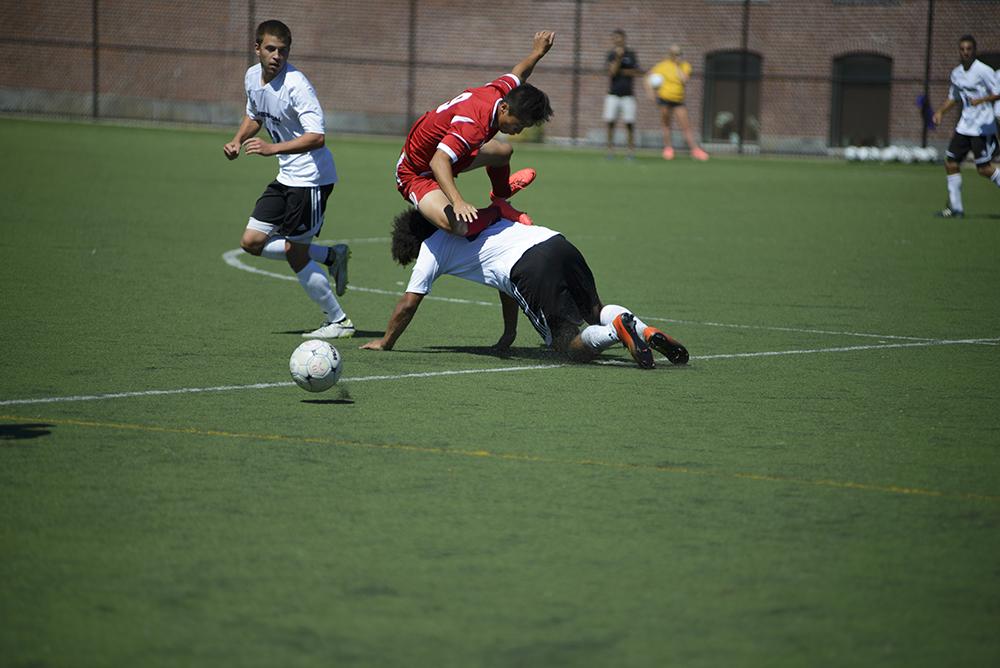 A temporary lapse in focus in the waning seconds of the first half allowed Massachusetts Institutie of Technology’s sophomore forward Kareem Itani to sneak past Emerson’s defense and put his team up 2-0.

MIT tacked on another late goal en route to a 3-0 victory over Emerson in the Lions’ first conference game of 2014, played Sept. 20 at Steinbrenner Field in Cambridge.

The result, a lopsided loss to a New England Women’s and Men’s Athletic Conference opponent, is familiar territory for the Lions, who are yet to notch a win in the NEWMAC since joining the conference last year.

Not so fast, said senior defenseman and co-captain Patrick Lowndes, who maintained that it’s far too early to hit the panic button after one conference loss this season.

“I don’t think we were outplayed despite what the final score looks like,” said Lowndes, “When you make even a few mistakes against a good team like MIT, they will capitalize, and on the other side we didn’t capitalize on their mistakes.”

According to Lowndes, the Lions haveone large goal for this season — to still be playing come playoff time — and that goal is still intact.

“It’s important not to overreact after one game,” he said. “We have a season under our belt.”

Frustration was the theme last year in their inaugural NEWMAC campaign, a season that saw five losses by 2 or more goals in conference play.

Despite a sixth NEWMAC loss by such a margin on Saturday, coach Jared Scarpaci, in his second year as head coach, said he has reason to believe this year will bring their first conference win and a few more.

“Last year was a feeling of the unknown, we had no idea what we were getting into” he said. “This year, all the guys and myself have a better handle on things. We’re expecting wins in and out of conference, and always, playoffs are the goal.”

The lack of in-conference success last season and in the opener this season has come as a surprising reversal of fortune to the team, which had grown accustomed to a sustained winning culture as part of the Greater Northeast Athletic Conference.

In their final season before switching to the NEWMAC, the Lions had an above .500 conference record and reached the semi-finals in the playoffs.  Emerson had made the GNAC playoffs every year since 1995, according to the Emerson Athletics website.

They did not qualify for postseason contention last year.

“There are no cupcakes in the NEWMAC,” said Lowndes. “We could rely on a few wins before switching, now we have to come prepared to bring our best every game or we will be put in check.”

The Lions (1-3-3) lost on Sept. 24 against Mount Ida and will resume conference play this Saturday against Springfield College, which defeated Emerson 6-0 last year.