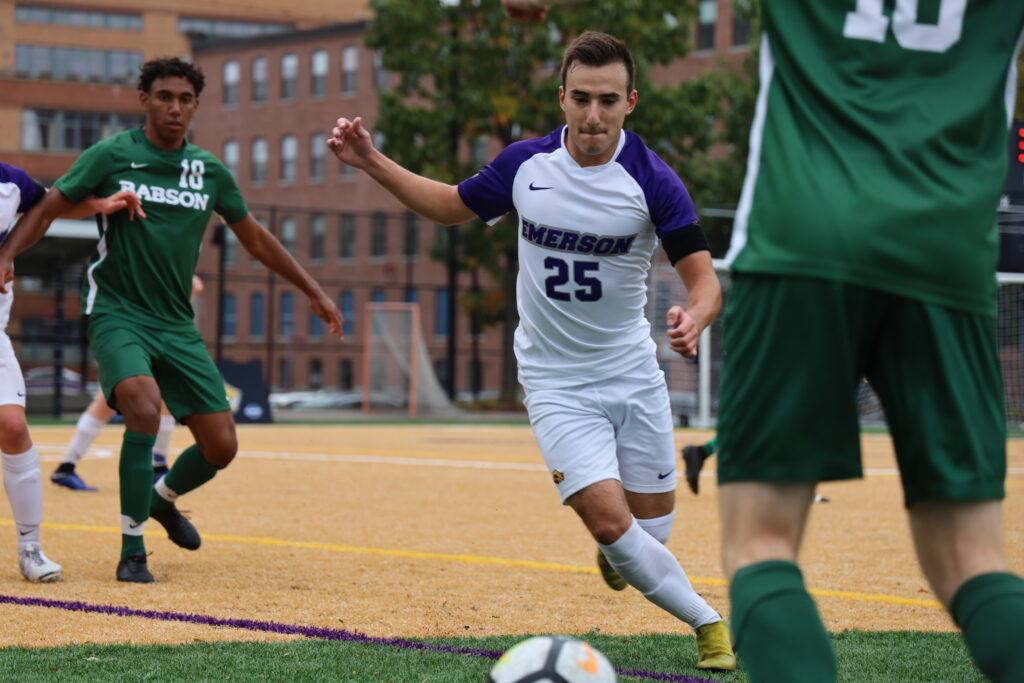 Junior midfielder Arturo Ruiz (center, No. 25) started in every game this season for the Lions. Domenic Conte / Beacon Staff

The Lions played in a physical first half as the defense stopped Babson from scoring in the first 45 minutes of the game. However, the Lions totaled two shots and could not capitalize on offense to score.

“We’ve had some good first-half performances,” head coach Bryan Harkin said. “We tried to tweak a couple of things. Our [defensive] press was better and we took care of the ball better, and we dealt with [Babson’s] overload at the back post. Then you’re undone by a set play, which is the difference in the game ultimately.”

Both teams continued to play defensively in the second half, but in the 62nd minute Babson scored back-to-back goals in two minutes. Babson forward Samuel Smith captivated the audience with his front flip throw-ins which directly led to the first two goals.

The Lions came close to scoring on two occasions but Babson’s defenders stopped both attempts on goal. With less than 10 minutes to play, Babson scored its third goal to seal the victory over the Lions.

“We just have to take the chances we created,” freshman defender Bo Feekins said. “I think we created as many chances as the other team, but they were just more clinical and they took their chances.”

With the loss, the Lions hold an overall record of 2-9-1 and sit in final place in the New England Women’s and Men’s Athletic Conference standings. The team lost its first four conference games and scored one goal in those four matches.

Despite the loss, Harkin said the team should be proud of its performance tonight against a tough conference team.

“We gave a lot and went toe-to-toe with probably one of the better teams in the conference,” Harkin said. “We talked about having honest and hardworking performances that we can be proud of afterward, and we can take a lot of pride in terms of being right there with them.”

The Lions return to action against non-conference opponent Framingham State University on Monday, Oct. 14 at 6 p.m. at Rotch Field.