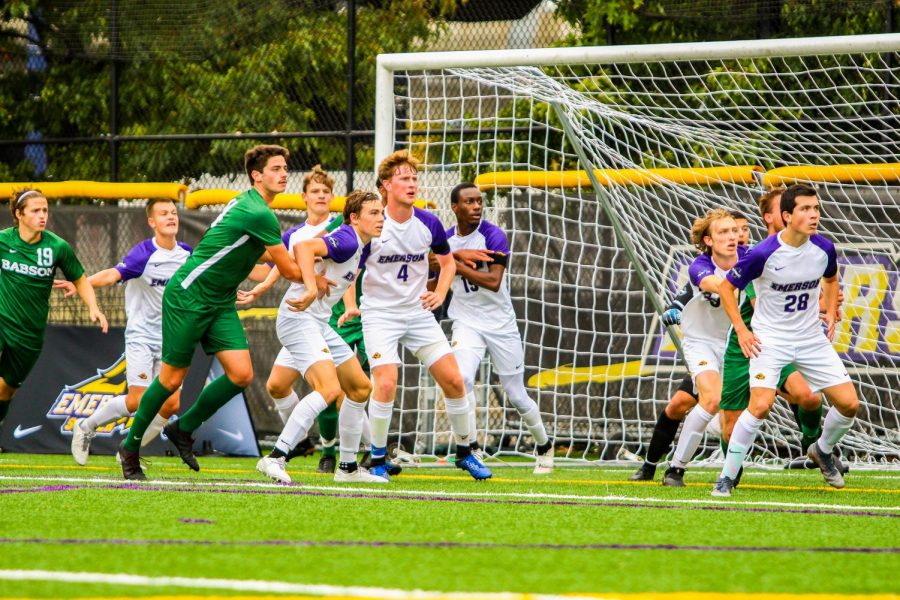 The men's soccer team's 3.56 GPA is good for the second highest in the conference, behind academic powerhouse MIT.

The United Soccer Coaches organization recognized the Emerson men’s soccer team with the Academic Award for its work in the classroom and its 3.56 cumulative team grade point average, the second-highest in the conference.

The men’s team trails only Massachusetts Institute of Technology in the NEWMAC in team GPA and is tied for the 22nd-highest GPA out of the 942 teams that boasted a 3.0 GPA or higher. It is the team’s first time being honored with the award since 2016.

“It’s not surprising because we want them to be excellent and compete in the classroom and on the field, and it’s something we try to instill in them,” head coach Bryan Harkin said in a phone interview. “And the ultimate goal is whenever [players] leave this program, or every year, you want to try and be academic all conference.”

“There’s no reason why you can’t be striving to get a 3.5 or above,” Harkin said. “Whenever we talk to student athletes and their parents, that’s a core value that we have. It’s not an expectation, but we want everyone to try and get to that.”

Junior Rye Keeler, one of the seven players from last year to gain Academic All-Conference honors, said the team encourages each other to shoot for a high GPA.

“As a team, we decided to have a goal to meet above a 3.5 GPA,” Keeler said. “So we just decided together as a collective to work hard towards that.”

Harkin said academics is already a part of the conversation with student athletes as they are being recruited. Both he and Keeler acknowledged Emerson’s academic strength and the internship and job opportunities that may come out of the connections made here.

“You’re not coming in here just to be a soccer player, you’re coming in here to grow as an individual,” Harkin said. “And when I think you’re looking for internships and jobs, that is something that is very valuable.”

Sports Editor Christopher Williams did not edit this article due to a conflict of interest.