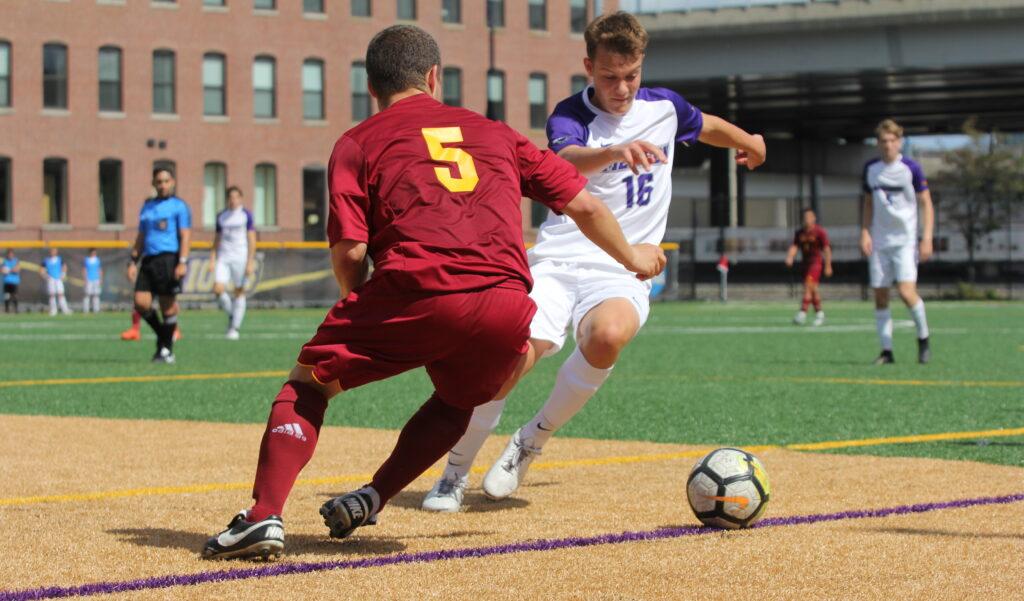 After head coach Bryan Harkin made many changes to the men’s soccer team, the Lions now look to him to lead as they approach a difficult schedule.

The Lions finished the 2018 season with an overall record of 3-13-1 and a 1-6 record in the New England Women’s and Men’s Athletic Conference. The team scored a total of 10 goals over 17 games with a shot percentage of 0.055.

“[Last season] was definitely a learning experience,” senior midfielder Creighton Dorfman said. “You learn a lot about yourself and your team through playing those difficult matches.”

During Harkin’s first year as head coach for the Lions in 2018, he said he made improving the culture of the team a priority.

“When I took the job, I recognized that the culture of the team was something that needed to be developed,” Harkin said. “It has taken a long time to see massive strides, but last year—even though we didn’t win as many games as we would have liked—that was something we thought we made a lot of progress in.”

“Some people might roll their eyes at stuff like that,” Dean said. “I think it had a pretty positive impact, and going into this year, I think we have a much improved culture, which wasn’t the case beforehand.”

Through this enhanced sense of comradery, the players have developed a strong trust in coach Harkin.

Over the summer, Harkin also changed his approach to recruiting players.

“Last year our recruiting strategy was bringing in more volume,” Harkin said. “We weren’t as worried about positions—we just wanted good players, wherever they played.”

With 12 of the 14 members of last season’s recruiting class returning to the team, Harkin focused on positions when bringing in freshmen for this season. The Lions recruited six freshmen for the 2019 season.

Harkin also brought changes within the leadership of the team. In addition to naming Dorfman as captain, the team has a small leadership group, consisting of nine upperclassman players.

“When the young guys start playing in a college setting, you need the older guys who have been through it multiple times to direct and lead you,” freshman midfielder Shane Biathrow said of Dorfman’s guidance. “[Dorfman] and our leadership group do a great job of explaining things and keeping us in the right mental state.”

The Lions have started off their season 1-2-1. Despite the apparently successful start, Harkin said their early success is only the beginning.

“It’s just a few games,” Harkin said. “We are happy to have the record we have, but it’s just a start.”

Dorfman said the Lions are still figuring out who they are as a team.

“We are still finding our own identity,” Dorfman said. “We have a very large roster with a diverse group of players. We are still trying to find out where guys belong and the best way to play. Over the season, we will find where our defining strength is.”