Men’s soccer notebook: Offensive woes continue as team yet to score in NEWMAC 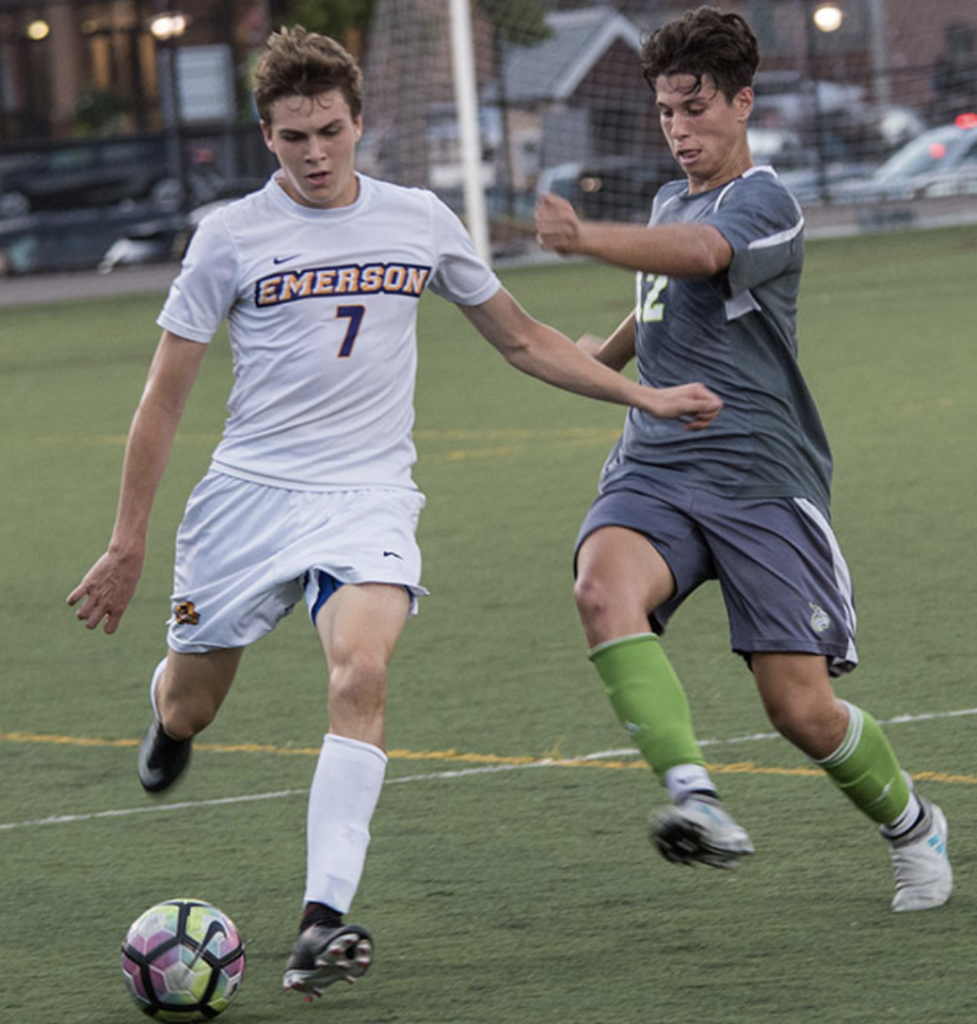 Both Emerson and Babson went into their clash last Saturday with a record of 0-3, looking for a crucial win to revive their NEWMAC playoff hopes. In the end, Babson defeated the Lions 2-0.

After the loss, the Emerson men’s soccer team is now in last place in the NEWMAC with a record of 0-4. With this loss, Emerson’s preseason goal of a first NEWMAC playoff appearance looks unlikely.

Defensive issues have been the Lions’ downfall in conference play, as they have conceded ten goals in four games, the second highest goals against total in the conference. Coach Bryan Harkin has attributed these defensive struggles to a continued failure to get clearances when the ball is in their own box. The Lions have also struggled offensively, remaining the only team in the NEWMAC without a conference goal after the opening four games.

The Lions have been solid in nonconference play, with a record of 4-3-1 after beating Eastern Nazarene 2-0 in their last non-NEWMAC game on Oct. 2. They also do not have a problem scoring in their nonconference games—they have scored 15 goals in eight games and have only been shut out twice.

Harkin said he has addressed these issues and believes that if the Lions can pull it together on the field, they should be able to find their first NEWMAC win of the season.

“It has been a common theme throughout the season,” Harkin said. “We have to defend well, be defensively sound and give teams very little. Hopefully we can hit them on the counter or catch them on a set play.”

Emerson will next take on Springfield (11-0, 4-0), a team that has scored 33 goals while only conceding four. While beating Springfield may be difficult, sophomore center forward Gavin Faucette said that the Lions know what they need to do to make the playoffs.

“Springfield is the best team in the conference,” Faucette said. “It will be tough to get a result there, especially at their home field.”

“They’ve come in and they’ve done well enough to earn starting minutes, and some of them are coming in and playing considerable minutes off the bench,” Harkin said. “We’re in the position where the best players play, and they’ve [proven] to be some of the better options at certain times and in certain games.”

Suvak has especially impressed senior leaders, including senior fullback Warren Backman, who praised the young midfielder after he took over for the injured Marco Correia.

“I was surprised how seamlessly he seemed to transition into the team in college because that’s not every freshman,” Backman said. “That’s just a testament to him, his workrate, his talent as a player, and obviously the coaching over his career that he’s had.”

Galileo Mondol and David Kemp have also made large impacts as freshmen. Mondol leads the newcomers in goals with two in his debut season, and Kemp has featured in six games, making 14 saves with two shutouts.

When attacker Duncan Bochicchio graduated, the Lions lost a player who scored 14 goals in two seasons. The Lions have already found someone to make up for his loss: sophomore attacker Gavin Faucette.

After scoring only one goal his freshman year, Faucette has come out strong in his second season, leading the Lions in goals with six in 12 games. Faucette is tied for fourth in the NEWMAC in goals scored and is second for shots attempted. Faucette’s standout year leading the attack has Backman excited for what he can do in the future.

“I just know with him only being a sophomore, there’s two more years for him to grow and get better and I think he can definitely do that,” Backman said. “He’s gonna be a big part of our team in the future, especially for scoring goals and being an attacking threat.”

Harkin said he believes the sophomore attacker is a pivotal part of his system.

“He has good athleticism, he’s got a good soccer brain, and he’s got a good eye for goal,” Harkin said. “It’s [our style], defend well with discipline and, hopefully we’ll find Gavin with his ability to counter attack.”

Emerson’s next game is on Saturday Oct. 14 at undefeated Springfield at noon.