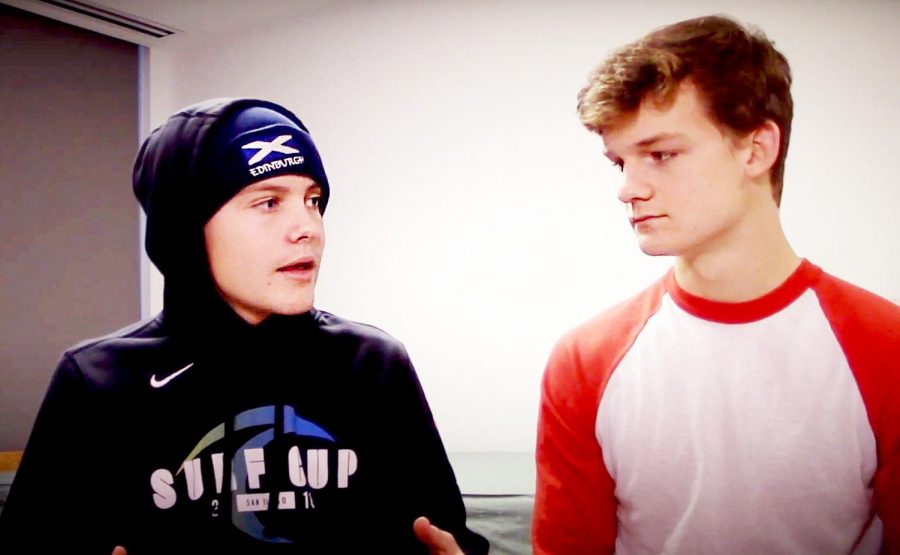 Men’s soccer sophomore defenders Bo Feekins and Aidan Ferguson have spent the past year creating soccer content for their individual YouTube channels. In an effort to build their platforms, they are now joining forces and starting a podcast, “The Fifty Fifty Podcast.”

The podcast launched its first episode on Sept. 27. It is centered around professional soccer, as it aligns with their YouTube content and personal interests.

The first two episodes of the podcast centered around England’s top division, the Premier League. The pair gave their takes on topics like who title favorites are, how managers are running their clubs, and how effectively newly acquired transfers will fare at their new club.

The two sophomores embarked on their content-creating journey in 2019, when Feekins started making appearances on Ferguson’s channel, The Fergie Time Podcast. After some time, Feekins started his own channel, Inside Arsenal, which features content about his favorite club, Arsenal FC.

“Bo and I have been working together on some creative projects for roughly a year now,” Ferguson said in an interview. “It first started with my YouTube channel. He would come on and we would have debates on there… He then started his own YouTube channel.”

Inside Arsenal accumulated 2,590 subscribers over the past year, and The Fergie Time Podcast amassed 2,510 subscribers since its inception in December 2018.

After working diligently over the past year, the two wanted to return to their roots and work on a project together.

“We knew for a while we wanted to get back to doing something collaborative,” Ferguson said. “We decided that starting a podcast on Spotify would be the best way to do something together and something new.”

To set themselves apart from the rest of the soccer podcasts in the world, the two have created a podcast where both can share their opinions on a different topics in professional soccer.

“It’s very much like a debate-style podcast,” Feekins said in an interview. “There’s so many topics and arguments and debates to be had in the soccer world, and so our podcast very much tries to delve into those arguments.”

Feekins said the plan is to release a new podcast every Saturday with a different topic to debate.

“A lot of the reason why we came up with this podcast is because when we walked to soccer practice or were eating at the dining hall, we’re always debating soccer topics,” Ferguson said. “This was just taking what we’re doing already and putting it on an audio platform.”

Feekins said finding topics to talk about is not too straining. Most importantly, they have a lot of fun with it as they go.

“Whether there’s a camera or a microphone on, we love to talk about the game,” Feekins said. “It’s not difficult for us to just hit a switch and put it online. At the end of the day, it’s just two friends who love the game of soccer, talk to each other about it, and then put it out there for hopefully other people who have a similar passion for the game to enjoy.”

The two said they have put a lot of effort into mastering their craft. Sophomore Connor Dang, Ferguson’s roommate and their teammate on the soccer team, said he has seen the time the pair puts into the content creation.

“I’m in the room with Aidan whenever he’s doing work for his podcast or his own individual channel, and they’ve been working on it for a while,” Dang said in an interview. “I get to see what goes down, especially when I get to see him and Bo working together—going through their own process of getting their videos down and making sure that their scripts are correct, getting down the information that they both want to talk about whilst also doing it in a timely manner. It takes a lot of time or practice as well in order to get that stuff to work properly.”

Feekins and Ferguson’s content has become a talking point in team training sessions. Dang said that conversations focused around the professional leagues goes on to help build team chemistry.

“There are plenty of training sessions, even just within the year, where we talk about their content,” Dang said. “We’ve been talking a lot about the fact that they’ve been making their own podcasts together, and the guys have been showing a lot of excitement. And there’s definitely a lot of times where the videos themselves have been talking points for 30 minutes or so during training just because there’s a lot of stuff to get down into.”

Looking towards the future, the two hope to continue to grow their individual platforms through the podcast and to continue posting content for their supporters on YouTube.

“I’m very happy with where I am with my YouTube channel,” Feekins said. “Obviously, we just started the podcast as well. I think long-term goals are just trying to build the platform more and more everyday and trying to create more diverse content from whatever is already out there.”