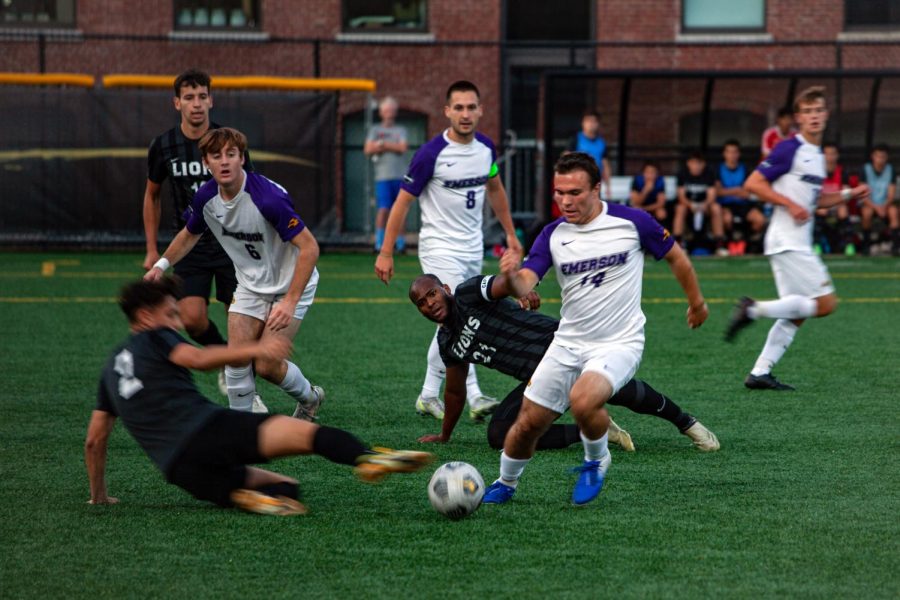 The men’s soccer team was defeated 1-0 in a match against Eastern Nazarene College at Rotch Field on Monday night. The non-conference brawl brought Emerson’s record on the season to 2-5-1.

Emerson entered the game on just one day of rest after losing to Babson College by a score of 2-0 in a New England Women’s and Men’s Athletic Conference (NEWMAC) match on Saturday. Head coach Daniel Toulson said the exhaustion shouldn’t have had an effect on the 28-man roster.

“We made seven changes to the starting group and I was very confident with the team we put out that fatigue shouldn’t have been an issue,” Toulson said in a post-game interview. “We spoke about it before the game that if we want to be where we want as a program those sorts of excuses can’t happen, we just have to figure out ways to win games.”

Eastern Nazarene, meanwhile, entered the matchup on five days of rest after their scheduled game for Saturday was postponed. Emerson junior defender Connor Dang said these factors didn’t play a role in how Emerson operated in the leading up to the match.

“They had fresher legs but realistically, when it comes to the game, that doesn’t really matter,” Dang said in a post-game interview. “It’s the same as every game, we do the same routine every time we play. The day before we always have a scouting report, go over what they have, what their strengths are, what weaknesses they have, and where we can exploit them.”

The match started slowly, with possession being traded between the two sides. Fouls and offsides stopped multiple chances for both teams and when the ball was finally shot on target it was for Eastern Nazarene and saved by first-year goalkeeper Jacob Remer.

Emerson didn’t find a shot until the 13th minute when first-year Diego Jimenez missed to the left of the goal. Both defenses were making pivotal stops and clearances, which kept the first half at a draw—but not without a few plays nearly finding the back of the net.

Eastern Nazarene would start finding their stride as the game passed the 20th minute. In the next ten minutes of play, they would take four shots, all of which missed the target..

Despite a four-game losing streak entering the Monday night matchup, Eastern Nazarene was able to capitalize on Emerson’s positioning.

“They got a ton of international players and are a very good team,” Toulson said. “I thought the first 25 minutes we did a really good job of controlling the game. That structure was good as play went on and as we made some changes I thought they started to get into things. The movement off of the ball caused us trouble and at the end of the game they were dragging us out of position quite a bit.”

Eastern Nazarene kept their foot on the gas, and shortly after the whistle started in the second half they would find the back of the net on a deflection off a Remer save in the 46th minute, giving the team a 1-0 lead it would never relinquish.

The deflection was the only shot that got past Remer in his 90 minutes of play. He would go on to keep Emerson in the match

“I was pretty happy with my individual performance and I think I was able to do everything that was required of me,” Remer said after the game.

Emerson kicked their offense into gear after this goal—continuously finding themselves in freekick or corner situations. Dang takes the responsibility for most set-pieces for Emerson because it is a major piece of his game.

“His delivery is second to none in the team,” Toulson said. “He is fantastic and he can put it on a postage stamp so that’s a good thing for us.”

In the 74th minute, Dang and Sophomore midfielder Ben Deeming lined up for a freekick. After a discussion between the two, Dang took the shot and the Eastern Nazarene goalkeeper just saved it.

“We were talking about whether not to whip it in or hit it and frankly we hadn’t tested the keeper at all from the free-kick position,” Dang said. “That was the one where I was going to be testing to see where it goes and we almost scored.”

Deeming would get his own chance in the 79th minute, a shot which was ultimately saved by the goalkeeper.

Remer said he was excited to get back on the practice field and rebound from the tough loss.

“I see a great hunger from the team,” Remer said. “We definitely want to bounce back on Saturday and get a big win in a conference game. Everyone’s hungry, everyone’s determined, and I’m looking forward to this weekend’s training for sure.”

The men’s soccer team’s next game is an away NEWMAC match against Wheaton College on Saturday.

“We’ll probably try and put a full stop to this game and start again,” Toulson said. “We’re playing Wheaton who is a good team, playing at their home grass which we won’t be used to but we won’t make any excuses. We’ll go into the game, try and play and bring the same energy that we brought to the Babson game and I think if we do that we’ll have a chance.”