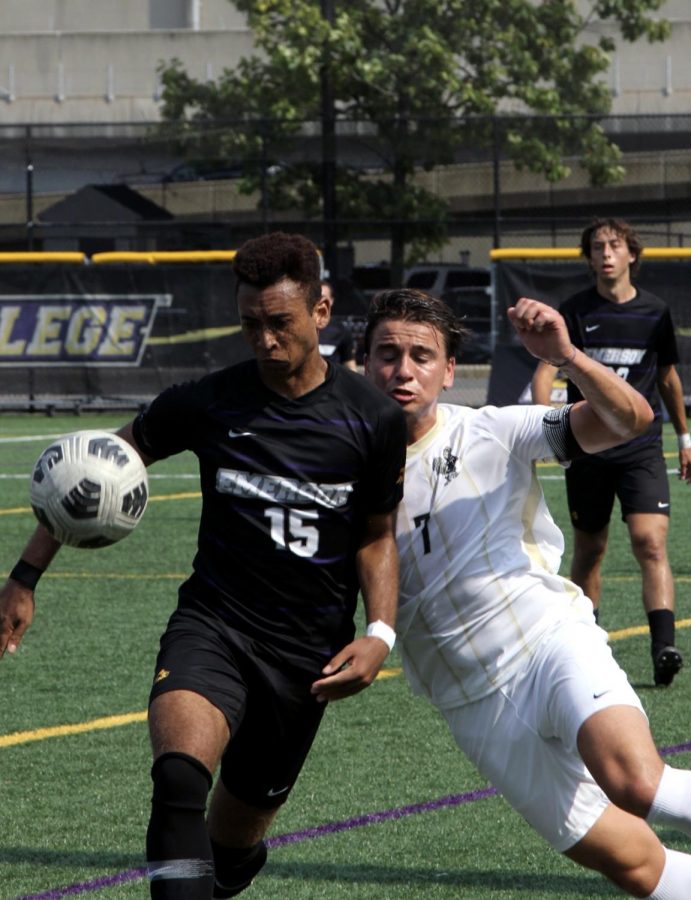 Emerson student Aaron Tyler playing as a defense on the field.

The men’s soccer team went head-to-head at Rotch with Trinity College on Sept. 12 losing one goal to none. Trinity plays out of the New England Small College Athletic Conference which is a division three competition the team has never obtained a win against.

It was clear to head coach Daniel Toulson that this match was going to be a test for the team. Trinity also played a match against Clark University just one day before the match against the Lions. Toulson said he scouted this performance prior to kick-off on Saturday.

Once play was underway, the team had to adjust to a different style of play than they were originally expecting going into the match.

“At the start of the first half we didn’t do a very good job of stopping the entry passes and they played a little bit more intensely than we thought they were going to,” Toulson said.

Trinity led the charge early on securing possession for most of the first half. The Lions didn’t take their first shot until 17 minutes into the game when freshman winger Gregory Kopanezos struck the ball over the goal.

Trinity would continue to set the tempo for the majority of the first half. This resulted in the Tigers taking the lead after a corner in the 36th minute. The ball was put in the middle and found by the boot of Trinity’s Michael Traynor.

The urgency from the team changed after going down one goal and the Lions started to capture more possession creating chances to equalize. Before halftime, there were a couple of shots put up for Emerson but none surmounted to a goal.

Toulson said that there were changes that needed to be made to their attack, but due to the later grasp of the game it made the transition into the second half easier

“About 20 or 30 minutes in we got hold of their play and then in the second half we figured it out and we were pretty good in the defensive phase,” he said.

“He said to us, we all have our art majors, we were all here for a reason, we’ve been playing this game since we were young, and we have to show them what we can do,” Deeming said in a post game interview.

As the second half got underway, the team was faced with the task of equalizing the score. The players came out with much more intensity and created multiple chances. Kopanezos was moved from the wing to midfield where he was sending many balls over the top.

“We’ve been working on getting the wings in behind more,” Kopanezos said in a pot game interview. I think coming into the game I was trying to get a couple of more balls over the top to create chances.”

The extent of their play didn’t stop with balls over the top but also the winning of the ball up the field.

In the 69th minute, the Lions sent multiple shots at the goalkeeper. One came off the foot of co-captain and defender Aidan Ferguson which hit off the post and was just saved. Many fans in the stands believed that the ball crossed the line and should have been awarded a goal.

“I think it was an unfair result and I think we really should have got a draw,” Deeming said.

Despite the team improving their level of play, they would go scoreless and lose against Trinity. The result might not have been what the team expected but there were positives to take away from the game.

“We’ve got to play with intensity for 90 minutes,” Toulson said. “But I thought the guys did a good job. This is a team from a good league, and it’s more of a mental thing and knowing that we can hang with these teams.”

For Kopanezos, he said he was pleased with the performances by the Lions and looks forward to the future of the season.

“I was happy with the fight of the guys we worked hard together in the second,” he said. “It is not the result we wanted but we know we’re building towards.”

The Lions then took on Dean College at their home stadium and won in dominant fashion shutting out the Bulldogs 3-0. They play their first in-conference game this Saturday against Springfield.