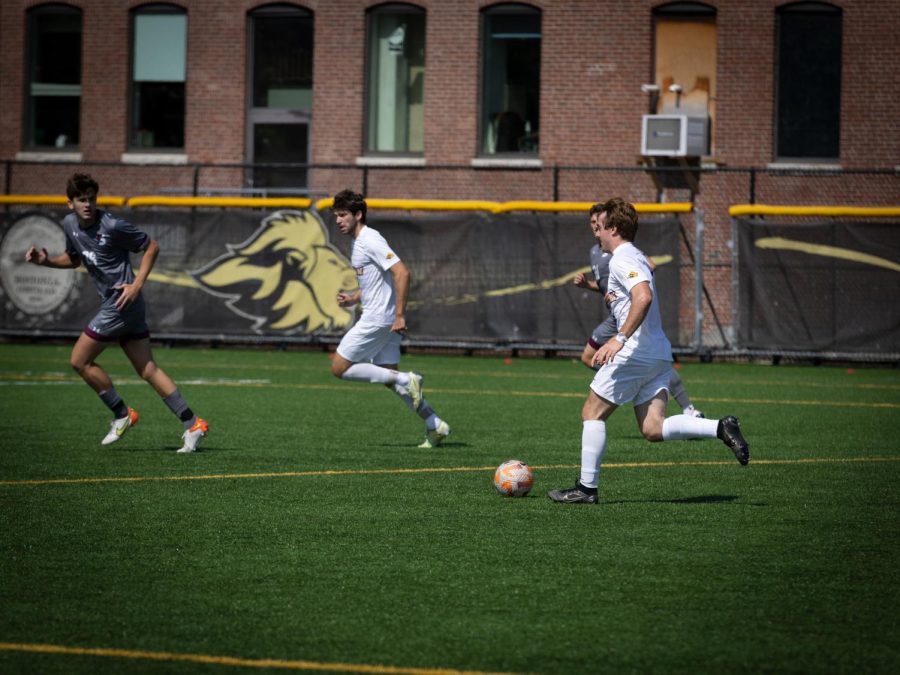 Lining up to shake hands with the Lesley University Lynx, Emerson men’s soccer players were all smiles Tuesday night as they prepared to hoist the Charles River Cup for the 8th time in team history.

The Lions, who won 8-1, remain defending champions of the Charles River Cup—a trophy given annually to the winner of competition between Lesley and Emerson’s soccer teams. Tuesday’s match was the 17th time the two squads faced off for the cup. Senior forward Phil Han said the annual contest is one that is circled on the calendar.

“Historically, this is one of the games that we look to get out for,” he said. “I think it was good for team morale to get the win.”

The Lions, now 4-0-3 this season, put on a commanding performance against the Lynx from start to end, finishing on nearly every chance they had and allowing few opportunities for Lesley to do the same.

Han scored the first goal of the night in the 18th minute rocketing the ball into the left side of the net with a powerful kick, putting the Lions up by one. Head coach Dan Toulson said he expected a big game from Han.

“As he was warming up, he looked really good, so I’m not surprised that he did that,” Toulson said. “I thought that was really impressive.”

Towards the end of the first half, the Lions doubled their lead with a goal from sophomore forward Teddy Bushara, who blew past the defender on the left wing and let the ball fly into the bottom right corner of the net.

Heading into halftime, the team was glad to be up by two, but not totally satisfied with the level of play.

“We always try to rally at half,” Bushara said. “Coach’s always great at his inspirational speeches. I think as a program we want to get better every half. I think we just built what we started in the first half and it kind of snowballed.”

In the first few minutes of the second half, the Lions looked to be on shaky ground as they took a pair of fouls and allowed a couple shots. They soon steadied themselves with two goals from Han and sophomore midfielder Diego Jimenez, separated by barely a minute.

“I thought we worked together well as a team,” said Han. “One of our goals was to play the ball quick and make a lot of passes. I thought we did that.”

“The ball movement was really good,” added Toulson. “The way we created attacks is what we wanted to do—getting the ball wide, cutting it back, little things that we talk about in practice.”

The Lynx scored their first goal of the night late in the second half—thanks to first-year midfielder Ayman Amghar—but the game was already out of reach. Minutes later, the Lions lifted the Charles River Cup in celebration, but Toulson noted it wasn’t the cup that mattered most.

“[For us] it’s not really about outcome goals, it’s a lot about process goals,” said Toulson. “I was much more focused on how we approached the game, how we warmed up, all those little things.”

Tuesday night, that process went well for the Lions. They will continue to test it in their next game against the 4-2-1 Babson Beavers on Saturday.