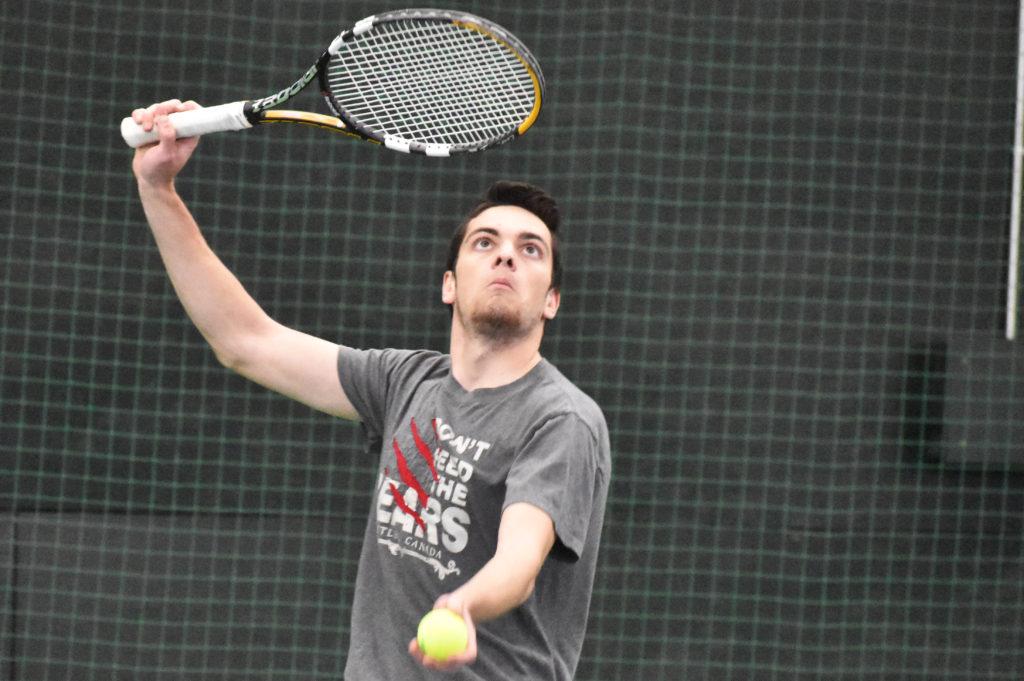 Freshman Jeff Pratt did not compete in the Lions' victory over Springfield College due to an illness. Photo by Abbey Finn / Beacon Correspondent

Emerson opened the match with a sweep of the doubles matchups. Freshman Bass Lin and senior Dan Okin led with an 8-3 win. Freshman Maximo Lawler and Mateus De Campos Tin, a senior at Berklee College of Music but a player on Emerson’s team, won the next matchup 8-5. Freshman Surya Sundararajan and junior Brock Higley picked up another 8-3 win in the doubles matchups to put Emerson up 3-0 before the singles round.

Head coach Aaron Bergeron said the Lions’ No. 2 and No. 3 doubles teams impressed him by stepping up in the absence of the team’s regular pairings due to freshman Jeff Pratt being benched because of an illness.

“Originally we were going to go with Maximo and Jeff playing together, but we couldn’t do that so we had to figure out some different combinations,” Bergeron said. “Brock and Surya had played together down in Florida and had some success, so we decided they were our best option at number three while maintaining a strong number two doubles team as well.”

Okin won the next matchup, 6-3 in the first set and 6-1in the second, and secured the team victory for the Lions with three matches remaining. Bergeron said Okin took control of the match to give them the win.

“After a close few games to start, Dan really took control and he was comfortably in the lead throughout the match,” Bergeron said. “We felt pretty good about clinching the match with Dan out there.”

Bergeron said the first New England Women’s and Men’s Athletic Conference win is a huge step as the team looks to make the playoffs in the conference.

“The rest of the teams are pretty strong and tennis is one of the NEWMAC’s toughest sports,” Bergeron said. “It’s nice to get that monkey off your back with the first win, but we want to keep building this year and next year. Making the playoffs is our next major goal.”

Emerson now holds a 1-1 record and are tied with Babson College and Wheaton College for third in the NEWMAC with four matches remaining. The top five teams make the playoffs, which begin at the end of the month. The Lions take on Wheaton at home on Saturday, April 13 at 10:30 a.m.