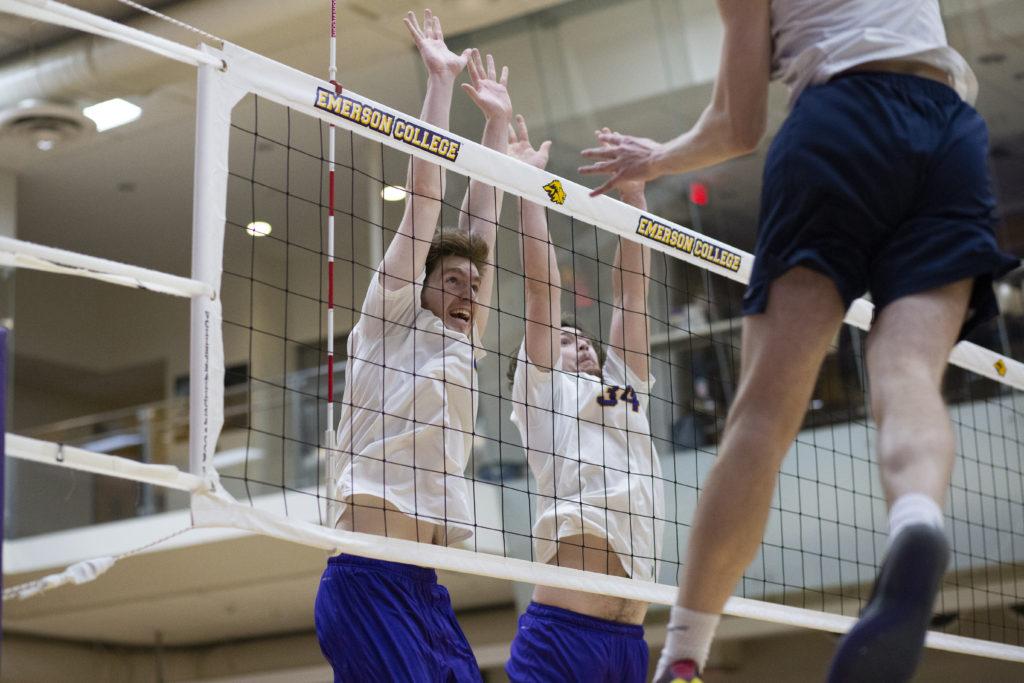 The men’s volleyball team honored seniors Jacob DiTore, Mark Piorkowski, and Win Kittivatcharapong on Saturday, March 30 for senior day. The Lions lost 3-0 in both matches of their doubleheader against the Wentworth Institute of Technology and Emmanuel College but still remain in playoff contention in the Great Northeast Athletic Conference.

Before the first match, the three seniors took to the court with their family members and head coach Ben Read to take pictures while Nick Pezzillo, Emerson’s director of athletic communication, detailed their accomplishments on the team. The home crowd erupted with applause in celebration of their achievements as DiTore, Piorkowski, and Kittivatcharapong received introductions into the starting lineup.

Piorkowski, an outside-hitter and marketing communication major from Montclair, New Jersey, established himself as an integral part of the team by ranking fourth in the GNAC for total attacks with 629 and led the Lions with 235 kills and 46 aces.

Piorkowski continued to perform well offensively, with a career 162 aces, 513 digs, and 2,658 attacks. He leads the Lions with an impressive 4.11 kills per set.

Piorkowski said his teammates impacted him greatly during his time on the team.

“I am going to miss the team more than anything,” Piorkowski said. “All of my teammates are incredible people in their own way. I love coming to play volleyball and hang out with my team every day. I always look forward to games and practices because of them.”

DiTore, a libero and marketing communication major from Salem, New Hampshire, played his first year at Emerson as a defensive specialist with 44 digs. DiTore took over as libero in his sophomore year and collected a career 386 digs and an average of 1.33 digs per set. This season, he led the Lions with 155 digs and 2.35 digs per set.

DiTore said playing with the team allowed him to discover new things about himself.

“Playing on this team has meant everything to me,” DiTore said. “It has taught me so much about myself, my capabilities, and my limits. It has made me a better teammate. All of the memories that I have made are moments that I will never forget.”

Kittivatcharapong, a middle-blocker and marketing communication major from Bangkok, Thailand, formed a large offensive role in his freshman year with 126 kills, 292 attacks, 31 blocks, and 19 digs. Since his first season, Kittivatcharapong totaled 622 kills, an average 2.16 kills per set, 1,467 attacks, 132 digs, and 120 total blocks.

Kittivatcharapong said he is proud of the hard work that the team has put in this season despite the losses to Wentworth and Emmanuel.

“[Playing for this team] is something I will cherish for the rest of my life,” Kittivatcharapong said. “Going out like this wasn’t part of the plan, but we have worked and played extremely hard, so I am proud of everyone.”

The Lions lost 3-0 to Wentworth—the second-ranked team in the conference. The first two sets ended in lopsided 25-10 and 25-14 victories for the Leopards. In the third set, the Lions managed to keep Wentworth to no more than a five-point lead, but the Leopards won 25-22.

The Lions’ first set against Emmanuel began tightly contested, with the two teams tied 5-5 after the first 10 plays. However, the Saints pulled away and won the first set 25-15. Emmanuel started strong and remained dominant throughout the second set by winning 25-16. The Lions kept the third set against Emmanuel close, with the score tied 10-10 after 20 plays, but the Saints ultimately pulled ahead to win 25-14 and secured a match victory.

After the game, Read commended the seniors and the skill and leadership they brought to the team for the last four years.

“[DiTore’s] energy, responsibility, and leadership has been fantastic and has made a big impact on the team,” Read said. “[Kittivatcharapong’s] ability to play anywhere in the front row for us, blocking, and jump serves have helped us get many big wins over the course of his four years. [Piorkowski] has developed into a very consistent outside attacker, and his ability to pass and get the ball outside has been huge for us.”

Emerson’s final home game of the season is against conference opponent Johnson & Wales University on April 4 at 7 p.m. at the Bobbi Brown and Steven Plofker Gym.