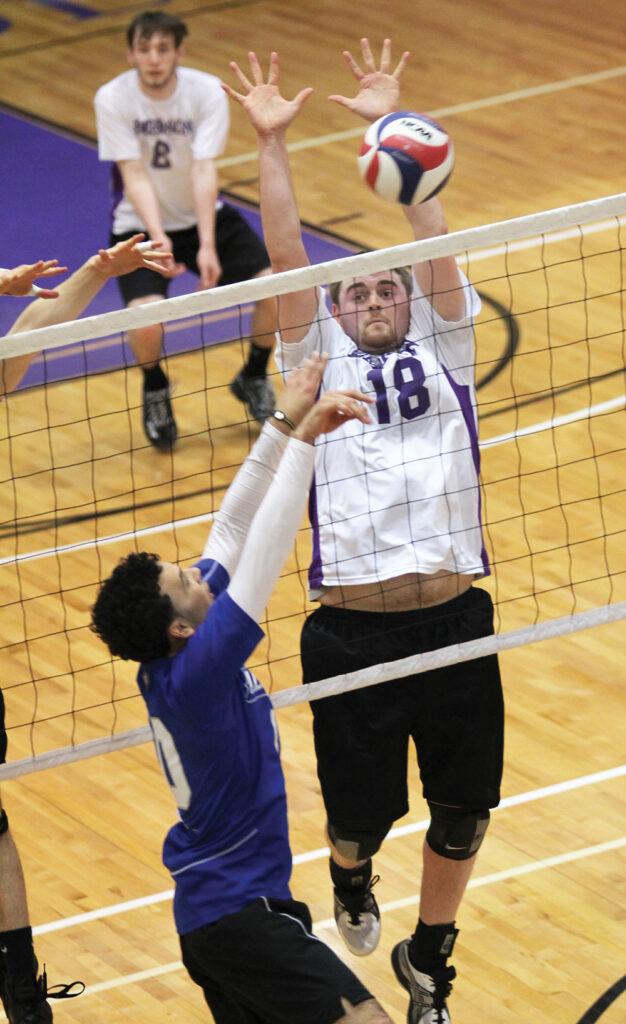 Stephen Selnick stepped to the line and readied his serve, with the season hanging in the balance. The Emerson men’s volleyball team was down two games to none on the road against third-seeded Johnson and Wales University.

The Lions had pulled within two points in the third game of the playoff matchup, but one more point would send the Wildcats to the next round.

Selnick sent the ball straight over the net, and the home team shifted into its offensive formation. Two quick passes set up Dan Struebing, who slammed the ball down through the Emerson block into the middle of the court, ending the season for the Emerson men’s volleyball team, and ending the Lions’ hopes of winning their first-ever playoff game.

The two teams split the regular season series, with Emerson winning 3-2 early in the year and the Wildcats grabbing a 3-1 victory this weekend. Head coach Ben Read said Johnson and Wales’ biggest advantage was its size, and that his team was prepared for the challenge but was unable to overcome.

“We knew we had to pass well so we could go ahead and spread our offense out and get a lot of people the ball,” Read said in a phone interview. “They’re a good enough team where we really had to think about adjusting our defense, adjusting our block — there’s a lot of things we have to adjust for, their height and athleticism … they were definitely much taller guys.”

The mechanically efficient attack had been working all night for the Wildcats, as their front line allowed them to swing with authority. Struebing, who led the Great Northeast Athletic Conference in both solo blocks and block assists, finished the night with 10 kills, and teammate Don Dias topped all players with 12. Dias rotated in off the bench and contributed to eight of Johnson and Wales’ 14 total blocks.

When the Lions’ ran their offense, they were less successful and finished with as many errors — 22 — as kills. Read said the strength of Johnson and Wales at the net adversely affected how the team swung on the attack.

“Their middles were very big, and they did a very good job of closing the blocks,” said Read, who completed his first season as both men’s and women’s volleyball coach. “It made it tough for us to go ahead and find spots on the court. At times, we might have been a little hesitant to be more aggressive try to swing around it or through it.”

Selnick said the errors Emerson made compounded things and allowed the Wildcats to close the games out late.

“It was a combination of us not finding a way to hit around them; we were letting balls hit the floor and they weren’t,” Selnick said in a phone interview. “We were the ones making all the errors, and in a game like volleyball, usually it’s the team that plays the cleanest that wins.”

Junior Nadav Swarttz echoed these sentiments, saying that though Johnson and Wales played a strong game, Emerson opened the window for its opponents on the defensive end. On several occasions, the Lions would seem to be in perfect position to return an attack, but the ball would whiz between two players who were just a second behind.

“We were a little slow to move our feet. We were great on serve receives, but then we didn’t dig the ball very well and we let a few balls drop. I think we let up a few points with some of our own mistakes,” Swarttz said.

Many of the Emerson players were competing in their first playoff game. Freshmen starters Nate Chivers and Connor Burton were given the task of stopping the Wildcat block and shouldered a large portion of the load on offense, swinging for 35 attacks between them. Selnick, who played in Emerson’s only other playoff game — a loss to Rivier in 2009 — has stressed throughout the season that the young team will only improve.

“The only direction this program is going to go is up,” he said. “I’m just happy that I got to be a part of it.”