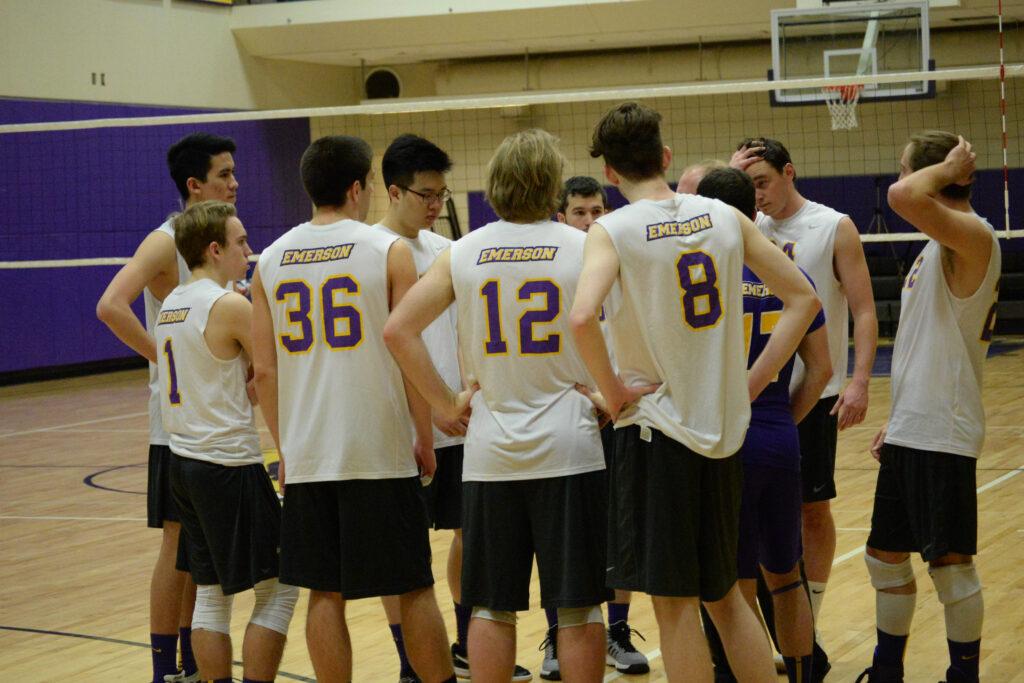 The Lions are currently sitting in sixth place in the GNAC, the final playoff spot, with a 5-9 conference record. Despite their senior day game this Saturday against GNAC rival Wentworth Institute of Technology, the squad has already solidified themselves in that sixth spot.

Head coach Ben Read said his club has to win the GNAC playoffs to move on to the NCAA Division III tournament.

“We play some really good teams down the stretch,” Read said. “Wentworth is regionally ranked and will be tough to beat.”

Last season, Emerson lost 3-0 in the quarterfinals of the GNAC tournament against Wentworth. This time around, they might get another shot.

Sophomore visual and media arts major Stig Regan said that the team is focused on taking each game one at a time.

“We’re not thinking about the playoffs that much right now,” Regan said. “We’ve got a couple of games left so we’re hoping to get a higher seed.”

Regan said that once the regular season concludes, the team has three days to prepare for their GNAC quarterfinal opponent. He said that they need to continue to improve in this short time frame.

“We have the playoffs on our minds, but we’d like to win our remaining games,” he said.

“We’ve been improving as a team and at this point every single player is playing at the level where we might have a chance to win the GNAC,” he said. “I’m very excited.”

Currently, Lasell College and Wentworth sit at the top of the conference, with 10-1 and 10-2 records, respectively. They are followed by Rivier University, Emmanuel College, and Johnson & Wales University, who all have seven wins or fewer in the conference. Emerson could potentially win seven conference games.

Read said he is just trying to get the team to maintain their pace of play right now.

Kittivatcharapong said that the team is being pushed to train harder as the season winds down.

“We’ve had more game plans and our coaches are being very specific in areas in which each player has to improve,” Kittivatcharapong said.

Regan said that the team’s chemistry and attentiveness may be a deciding factor down the line.

“We’ve learned to adapt as a team,” Regan said. “We have five seniors who will be playing their last games. We’ve got to get the job done.”

Read said that to be successful in the playoffs, the gang needs to focus on not only improving as individual players, but as a collective unit.

“Our chemistry is essential. We need to communicate,” Read said.

Regan said that he expects the squad to finish strong. He believes that the team has a good shot, but refused to make any guarantees.

“The team has pulled off big upsets in the past,” he said. “We’re going to have to bring it the night of quarterfinals.”

The GNAC quarterfinal match will be played on Tuesday, April 5.