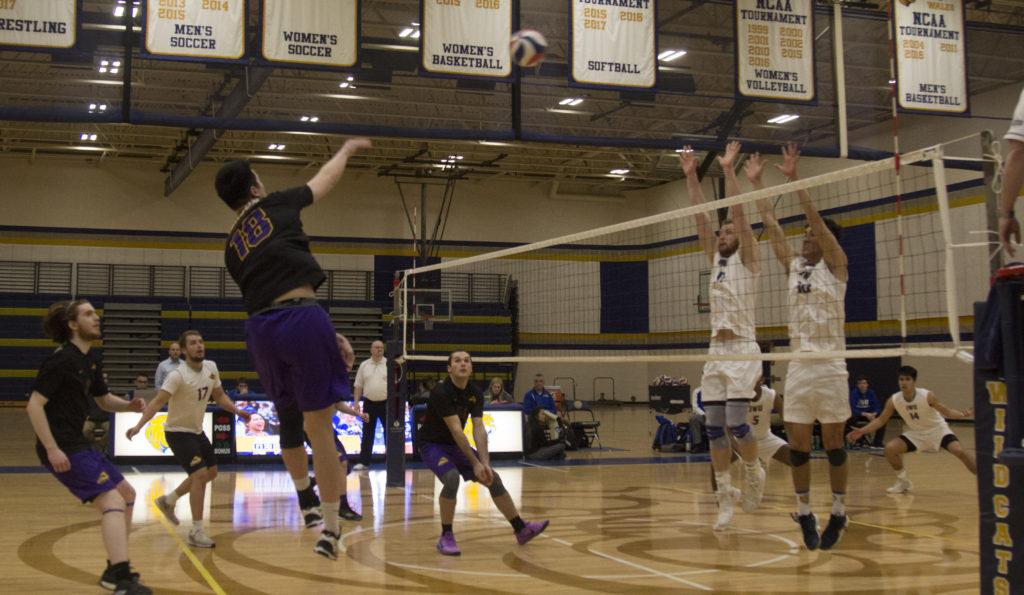 Win Kittivatcharapong (center, No.18) strikes a volley over the net. Photo by Kyle Bray / Beacon Staff

The men’s volleyball team will aim for a longer playoff run in 2019 after losing in the Great Northeast Athletic Conference quarterfinals for the last five years.

The Lions finished 5-9 in conference play last season and made the playoffs for the ninth year. Emerson ranks sixth out of eight teams in this year’s GNAC Preseason Coaches’ Poll, ahead of Regis University and Colby-Sawyer College.

“The conference we’re in is extremely competitive,” Read said. “But we’ve got a really strong core, and we’re hoping that can carry us to where we want to be.”

“Our freshmen are amazing, attitude-wise and also in what they bring to the court,” DiTore said. “I’m very excited to see what they have to bring because they’re all very different players with different skill sets. They’re going to make us more dynamic.”

“Josh Elliot is someone that can run a very good offense as a setter,” Read said. “Jonah [Higaonna] came in and is a scrappy player who’s very good in the back row. Leon [Chen] could get some playing time in the back row or be a serving specialist for us. Max [Connolly] is helping us out on whatever role we can find him on the court.”

A small roster presents a major challenge for the Lions. With ten available players, the team will have to play matches with only four substitutes. Though he had a bigger roster last season, Read said the team can overcome this obstacle.

“Practicing is a bit more challenging, and we’ve got to stay healthy,” Read said. “We’ve got a good group, but we just need to make sure that we’ve got everyone out on the court at the same time.”

DiTore said the team will need to have a championship mentality as they strive for a more successful season.

“We need to keep our energy up more and be more positive throughout the year,” DiTore said. “Volleyball’s a mental game, so we can’t go into games with negative energy or get down when we lose a few points.”

Read said the team needs to make some strategic adjustments in order to reach its postseason goals.

“We can serve aggressively to get teams out of their offense to help our defense,” Read said. “If we can pass lights out, that’ll allow us to get the ball to the people we need to in order to be successful.”

The Lions will open the season at home against non-conference opponent Nichols College on Jan. 26 before kicking off GNAC play against Lasell College on Feb. 14.