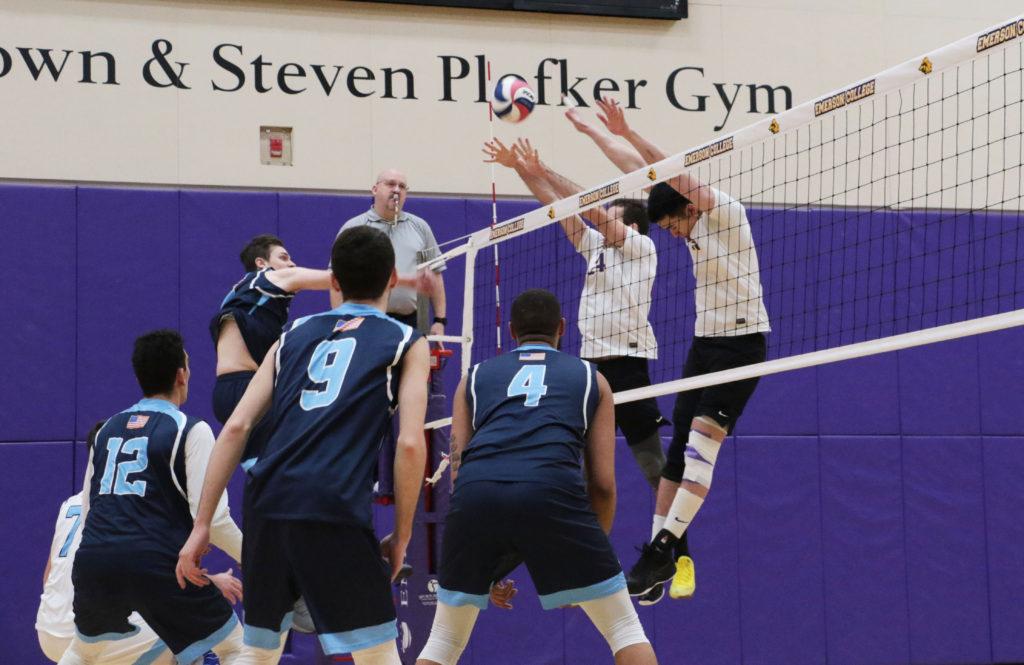 The men’s volleyball team fell to Lasell College three sets to one on Wednesday night in its Great Northeast Athletic Conference opener after not losing a set in their previous four matches.

The Lions entered their first conference game of the season as underdogs against Lasell, who ranked fourth on the GNAC Preseason Coaches Poll. Emerson ranked sixth out of eight teams.

“We’ve played a lot of easy teams recently, and this is a team that gave it to us and really pushed us to work harder,” Willinger said. “We can learn a lot, and this just makes us want to work harder in practice.”

In the first set, Emerson jumped out to an 8-1 lead and held on to win 25-20. Head coach Ben Read said the Lions showcased their potential at the beginning of the match.

“The first set we showed what we were capable of,” Read said. “We fought extremely hard. I think we surprised them a little bit.”

After 13 kills in the first set, Emerson slowed down and spent the remainder of the match trailing Lasell. A late comeback in the second set fell short by three points as the game continued to shift in Lasell’s favor. The Lions lost the third set by a score of 25-19 and the fourth set by a score of 25-13.

Senior Mark Piorkowski led Emerson with 17 kills on a season-high 62 attacks, but a balanced Lasell offense overpowered the Lions. Four players on Lasell scored over 10 points, but only Piorkowski surpassed 10 for Emerson.

“They made some adjustments, and we didn’t adjust after that,” Read said. “That’s the next step—we need to learn how to adjust our game offensively or defensively depending on what the other team is doing.”

Read said the team can improve in several areas as they move forward in the conference.

“Our setters didn’t have the best day, but the passing also wasn’t good at points,” Read said. “There’s a handful of things we did well, and there [are] some things we need to improve. That’s early season volleyball.”

Emerson plays its next game on Feb. 16 against non-conference opponent Newbury College, who the Lions defeated 3-0  in a match on Feb. 5. Emerson returns to GNAC to play against Regis College on Feb. 22 at home.