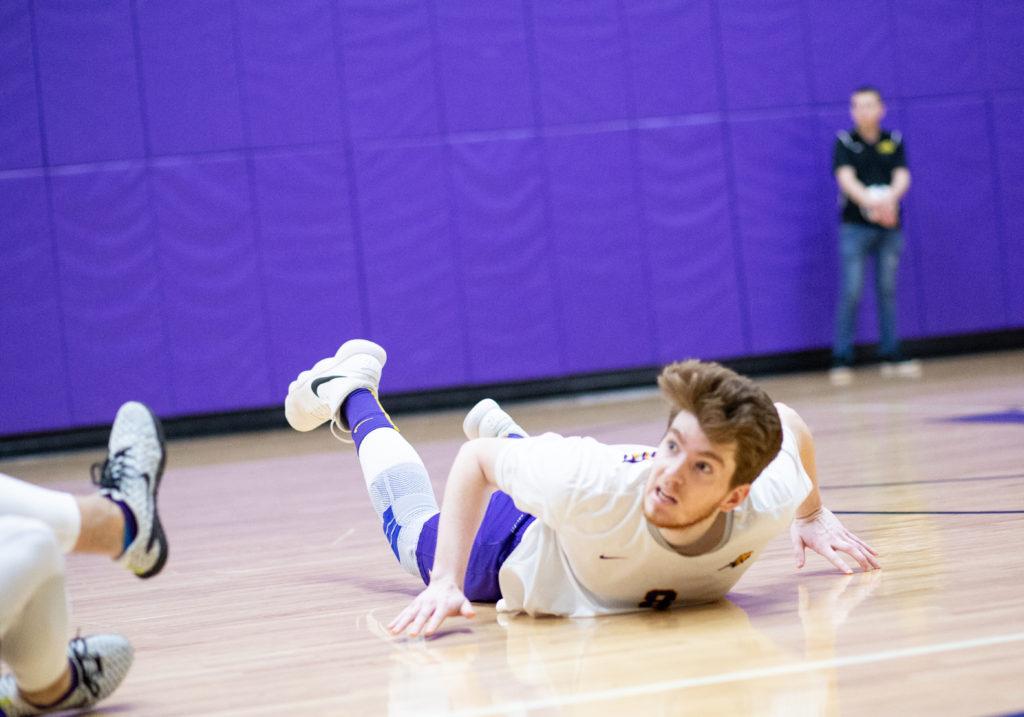 Senior Mark Piorkowski booked his 1,000th career kill for the Lions in a game against Regis College on Tuesday. Photo by Alexa Schapiro / Beacon Staff

Senior Mark Piorkowski, an outside hitter for the men’s volleyball team, reached one of the biggest milestones in his career when he made his 1,000th kill in a loss to Regis College on Tuesday night.

Piorkowski leads the Great Northeast Athletic Conference with an impressive 4.14 kills per set and totals 290 kills so far this season, on track to set a new season high. Piorkowski said he has wanted to reach the 1,000 kill milestone for a long time.

“On the first day of practice, I looked around and I saw all of the banners around the gym,” Piorkowski said. “After looking at them for a bit, I made it a personal goal for myself to get my name on one of these banners before I leave. I was really close to getting Rookie of the Year in the GNAC, but I had built a solid enough foundation of kills my freshman year, so I decided to aim for this milestone.”

Before Piorkowski started playing volleyball, he played baseball and basketball at Montclair High School in Montclair, New Jersey. During his freshman year, Piorkowski decided he wanted a spring sport to play while he wasn’t playing basketball. He decided not to continue playing baseball because of previous injuries he experienced while throwing.

When Piorkowski first started playing volleyball, he said he felt like a natural.

“My coaches were surprised I was picking up on it as quickly as I was within just the first few weeks,” Piorkowski said. “My timing for the ball came very naturally because of the previous sports I had played.”

At the end of his freshman year of high school, Piorkowski’s volleyball coach recommended he play year-round with a club team. Piorkowski tried out for the 17 Red Club team with Warren Sixpack Volleyball Club in early summer 2012 and made the team, but did not join right away.

“I didn’t think I was ready to take it on,” Piorkowski said. “I was scared, I didn’t know anybody [on the team] and I didn’t know how being on the team would be for me.”

After considering his future with the club team, Piorkowski decided to quit basketball and pursue volleyball as a year-round sport.

“[Basketball] just wasn’t as much fun [as volleyball],” Piorkowski said. “I didn’t get a lot playing time and I didn’t like being on the team. I loved playing volleyball so much more, so I decided that I wanted to put everything into it.”

Piorkowski tried out for the club team again in summer 2012 and fell in love with playing on the team. As Piorkowski continued to play with the club, he began investing more and more time into the sport. He practiced nearly seven days a week, which allowed him to build on both his ability and assurance.

“Having so [much play time] helped me build a lot more confidence,” Piorkowski said. “Building confidence in myself as a player really helped me to become comfortable enough to try new things on the court.”

Piorkowski’s club team played in national tournaments from 2013 to 2015. With the experience, reps, and skills that Piorkowski built on the club team, he realized he could continue playing volleyball into college. After his performance in the 2014 national tournament, Piorkowski’s email inbox flooded with messages from coaches from Division III schools, including Emerson.

Head coach Ben Read scouted Piorkowski at the 2014 national tournament and noticed his potential to be a collegiate player right away.

“We reached out to [Piorkowski] early in the recruiting process,” Read said. “We identified him as a player who could start for us and make an immediate impact.”

In September 2015, Piorkowski toured Emerson’s campus and practiced with the team. He said the positive atmosphere on campus impressed him.

“Everyone at Emerson seemed like they were really happy and enjoying their time here,” Piorkowski said. “The team looked like they really enjoyed playing together, and the combined atmosphere of the team and the school made me feel that it was the right place for me.”

Piorkowski played his first game as a freshman at Emerson on Jan. 16, 2016 and said he was anxious at the beginning of his career.

“When I first stepped on the court freshman year, I was so nervous,” Piorkowski said. “Everything was so much faster and more intense than it was before. I definitely had butterflies and wasn’t nearly as confident than I was playing club.”

Despite the lack of confidence Piorkowski felt in his first game, he finished the match with three kills, four digs, and a team-high 6.5 points.

Read named Piorkowski as a captain for his senior year along with senior libero Jacob DiTore and middle blocker Win Kittivatcharapong. Since receiving this role, Piorkowski said he strives to share his knowledge of the sport with his teammates.

“I’m honored to be their captain,” Piorkowski said. “At times it is a lot of pressure, but I enjoy having this leadership role. I know that I have enough knowledge in volleyball that I can pass some of that down to the future leaders on the team. I want to be a captain that pushes the team to be better.”

Freshman setter Josh Elliott said Piorkowski’s strong leadership and passion for progress shows, and that he consistently helps the team learn from mistakes.

“He is extremely dedicated,” Elliott said. “He is always the first guy to hold people accountable.”

As the team heads into their final games in hopes of making the playoffs, Piorkowski said he wants to make the most of his remaining time in the No. 8 Lions jersey.

“I don’t want to finish at Emerson with any regrets on the court,” Piorkowski said. “Whenever the season ends this year, I want to feel that I have put everything into it and that I have pushed for something greater than anything we have done in the past.”

Piorkowski and the men’s volleyball team will play their final home game of the season in a match against Johnson & Wales University on April 4 at 7 p.m. in the Bobbi Brown and Steven Plofker Gym.