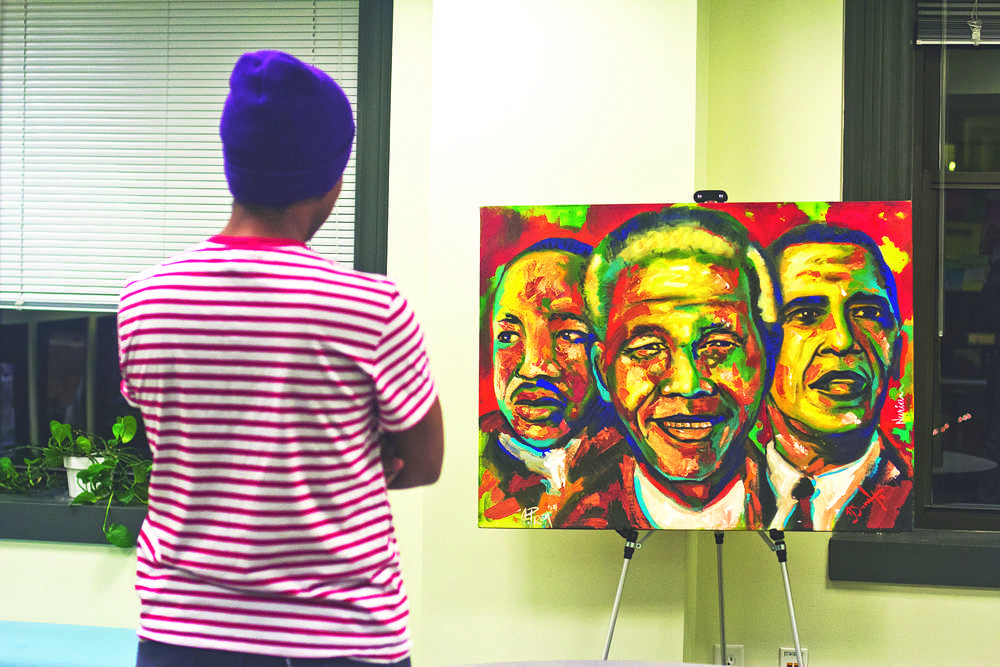 On the 10th floor of the Walker Building, there’s a three-by-four foot acrylic painting of Nelson Mandela, Martin Luther King, Jr., and President Barack Obama. Streaks of bright green, yellow, and blue paint define the facial features of these notable black leaders. Filling the canvas against a red background, Mandela’s face smiles in the center, with King on the left and Obama on the right.

The multi-colored artwork is a collaborative work between Mexican artists David Silvah, Nuria Bac, and Antonio Proa, who visited Emerson from Dec. 5 to 7 for Baja to Boston, an initiative that is part of an ongoing six-year public diplomacy campaign called Rediscover Rosarito led by Gregory Payne, an associate professor in the communications department.

Payne said he and a handful of his students started Rediscover Rosarito in 2008 to work on reinstating a positive perception of Rosarito, Mexico.

Rosarito is a beach town whose image and economy have been bruised due to what Payne described as media-inflated impressions of crime. The project includes the Annual Rosarito Film Festival, held in Mexico, and Baja to Boston, based at Emerson, said Payne.

Baja to Boston aims to create positive change within and across communities through art, said Silvah. He said Mandela, King, and Obama represent this goal.

Silvah said although the artists hadn’t painted together before, and their styles differ greatly, they all use vivid colors in their work, which made the painting successful.

“The bright colors are common between our styles,” said Silva. “We are very colorful people.”

The artists depicted just the leaders’ faces, Silvah said, because they wanted to capture their distinctive expressions.

“Their eyes talk to you a lot,” said Silvah.

The painting was a spontaneous collaboration, said Payne. Since 2009, Baja to Boston has included an exhibition of the visiting Mexican artists’ work at the SOWA Artist’s Studio in the South End, a fundraising dinner at Fajitas & ‘Ritas for The Boys and Girls Club of Boston, and an annual collaborative painting.

The Bird Street project was started in 2013 by Payne and Spencer Kimball, a professor in the communications department. It is a partnership between the college and the Bird Street Community Center of Dorchester that teaches middle and high school students to resolve conflict through communication, said Payne.

“We had a convergence between these public diplomacy projects,” said Payne, “one global and one local.”

On the final day of Baja to Boston, an art workshop was held at Skye Schulte’s art studio in the South End for the Bird Street students, a few students from the David McKay School in East Boston, and Emerson faculty and students, said Payne. It was at this workshop where the idea for the painting was sparked.

Bird Street participant Randy Boston said the artists were conversing with the students about Mandela’s recent passing, and decided they wanted to pay tribute to the leader. They chose to add King and Obama because they represented similar ideals, he said.

“We picked these three people because they had changed history,” said Boston, who is a sophomore at City on the Hill Charter School in Roxbury. “Without these people, I don’t know what 2014 would be like.”

Boston said the fundraising dinner at Fajitas & ‘Ritas was successful, too. The restaurant has hosted the dinner for the past three years, said the owner Brad Fredericks. About 50 people attended December’s dinner, said Payne, and over $800 was raised for Bird Street.

Fredericks said he is glad to take part in Baja to Boston.

“I’ve met the artists and the students, and it’s neat having them here,” said Fredericks.

Dora Gonzalez, a communications management graduate student from Monterrey, Mexico, joined Rediscover Rosarito in 2012 when she came to Emerson. Gonzalez coordinated and wrote press releases for the events, in English and Spanish.

“Art helps if you want to connect in a more natural and human way,” said Gonzalez. She said people don’t usually pair painting with public diplomacy, but the art has the power to bond people from different cultures.

The painting will be showcased on the floor housing the office of diversity and inclusion until the beginning of March, when it will move to high schools in Boston and Los Angeles to accompany essay contest presentations on King’s “I Have a Dream” speech.

Proa, one of the Mexican painters who created the work now displayed on the 10th floor, said artists exhibit the true essence of a nation.

“Art has no boundaries; it is a universal language,” said Proa. “We had the opportunity to show the Bird Street students the power we have to create something and communicate. In the end we can communicate through art.”