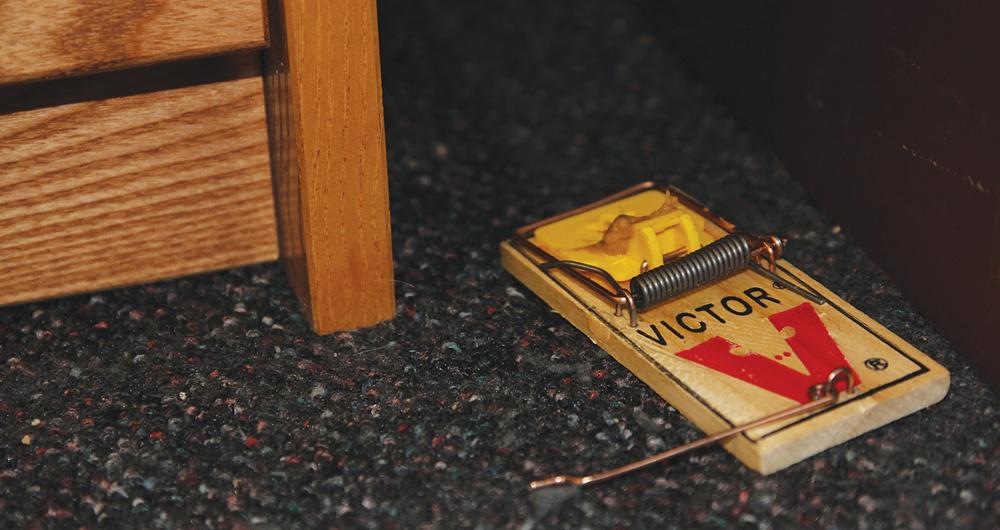 When Paris La Rock, a fourth floor resident of the Little Building, came back to her room from winter break, she said she was greeted by a bed of mouse droppings and some new, unwanted, furry friends.

“We got an old bowl that was on top of the microwave, and caught [the mouse] under the bowl. It was stuck under there and we called facilities to get rid of it, and they did not,” said the freshman visual and media arts major. “So it died under there.”

The growing frustration with mice in the Little Building is more palpable among students after a four-week winter break. Numerous residents have voiced complaints about a mouse infestation in the lower half of the 97-year-old building of Emerson’s primary residence hall.

“I see mice mostly when students aren’t here,” said Whitney Lowdermilk, a resident assistant of the sixth floor and a visual and media arts major. Lowdermilk said she has lived in the Little Building for three years.

Recounting their own experiences, residents of the fourth floor have complained of seeing mice scurry around the halls and inside rooms on a regular basis.

La Rock and her roommate, writing, literature, and publishing major Alex Kowal, said they found mouse droppings on their clothes and inside their dresser drawers. As this was the second time the roommates had seen signs of a mouse problem, they called facilities workers again.

All maintenance problems at the college are channeled to a toll-free number in Phoenix, Ariz. according to Marc Hamilton, associate vice president and director of Property Management.

The number is managed by EMCOR, a facilities service call center directly linked to the college’s Facilities Management Department.

“Contracting for their call center services enables us to provide the campus community 24/7 work request capability in a cost effective manner,” said Hamilton in an email to the Beacon.

Hamilton said after a caller reports a mouse problem, a work order is then transmitted to Facilities Management and later dispatched to a facilities technician.

“[The technician] immediately follows up and investigates the report. The exterminator responds on-site the next business day or sooner if necessary,” explained Hamilton.

But after waiting for more than 72 hours for her complaint to be addressed, La Rock said she went to the Office of Housing and Residence Life in search of a better solution.

According to La Rock, the receptionist in the office told her that mice come with living in downtown Boston, and didn’t offer an alternative to calling Facilities Management.  A few days later, she said, an exterminator went to her room and set a pair of mousetraps.

Alex Stills, a freshman journalism major, also lives on the fourth floor of the Little Building and said she had a similar experience upon her return to campus.

The day she came back from winter break, Stills said she saw two mice running across her room.  She said she immediately notified her RA, Kit Brown.

“There were obviously mice in there, we could hear them running around,” said Brown, a sophomore political communication major. “And we noticed that they must have been in her sheets because there were feces in her bed.”

Stills said her roommate also found droppings in her own bed and inside both of their dresser drawers. After contacting facilities, Stills said an exterminator came and set up a couple of traps.

“I think the traps really don’t do much because the mice just avoid them,” said Stills.

Brown said many of his residents are dissatisfied with the provided solution to the mouse infestation.

“I’m not sure if that is going to take care of the problem entirely, but I guess that is all that they can do,” he said.

Hamilton said that only under controlled conditions and with the advice and application from a professional exterminator will facilities use poison bait in out-of-the-way locations.

“Traps have proven to be effective and are the principal method used,” he said.

But below and beyond the fourth floor, rushing rodents seem to continue to echo in the halls.

“Recently, in the middle of the night, I would hear rattling in my drawer. If I got close enough I could hear chewing,” said the freshman visual media arts major.

Hamilton said the age of the building and the presence of food are both factors that can attract mice.

Brown said he understands the escalating upset of his residents.

“Hearing a mouse or something is not a big deal, but if it is getting in your sheets and in your clothes and the college is requiring you to live here, then that is unacceptable,” he said.

Hamilton said he and his staff are aware of the problem and encourage any student who feels they have not received the proper attention to alert him.

“Facilities is very sensitive to how upsetting a mouse sighting can be to anyone and is consistently diligent in responding to the report quickly and taking deliberate steps to eliminate any problem that may exist,” he said.