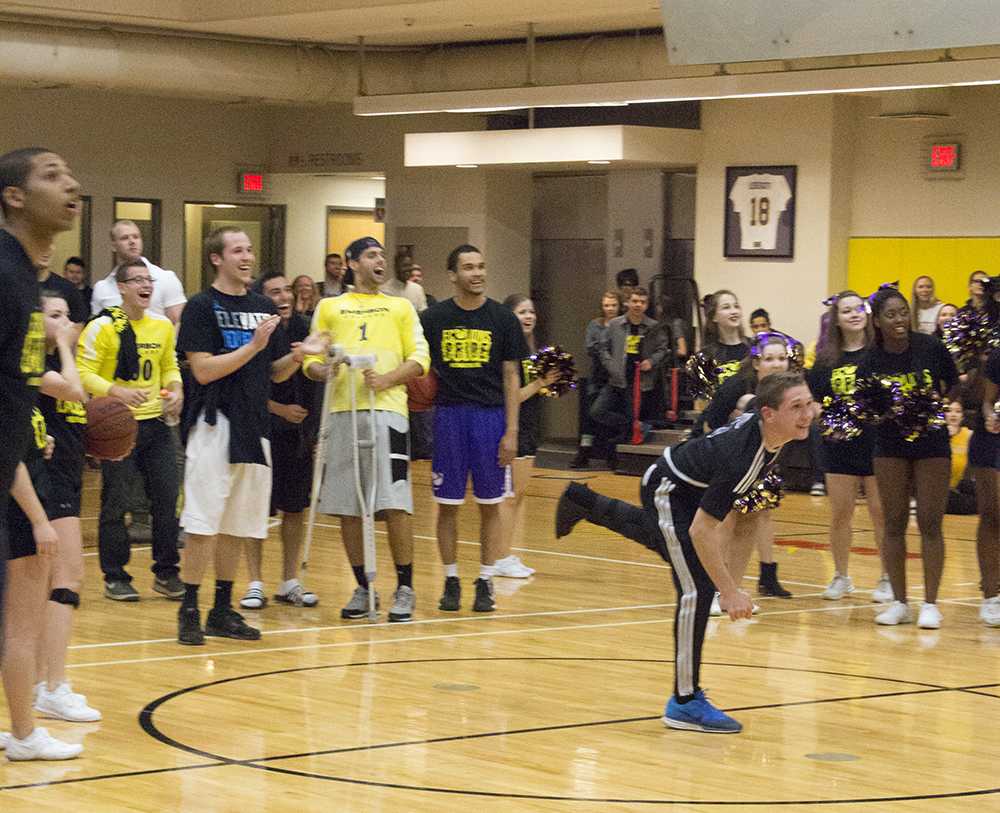 As Columbus Day came to a close, Midnight Madness returned to Emerson College, kicking off the 2013-14 men’s and women’s basketball seasons.

Midnight Madness events are common to open the first day basketball teams are allowed to practice under NCAA guidelines, but Emerson skipped the tradition last year.

Tatiana Motevalli-Oliner, a senior marketing communication major and softball player, was the event’s primary organizer as a student-athlete representative to the Emerson College Athletic Trust Fund, which sponsored the activity. Motevalli-Oliner said the absence of Midnight Madness in 2012 was a combination of insufficient funding and poor scheduling.

“[I was] really upset last year because we didn’t have the opportunity to do it,” Motevalli-Oliner said. “This one worked out really well between the gift from the Trust Fund and support of [the] Emerson Athletics Department being really excited about doing it, and it falling on Columbus Day made it really work out.”

“If it can continue, that would be great,” Gould said. “It is a good way for us to say ‘This is who we are, this is where we are. We want to be a part of the school community and we want you to be involved with what we do.’ It’s a really good two-way street.”

The night started at 10:30 p.m. and featured dancing, t-shirt and gift card giveaways and half-court shot competitions, all led by emcee Jon Allen and the Emerson Spirit Squad.

“I think it went really well [and] it was a lot fun,” said Allen, a senior marketing communication major, who directed all pre-midnight activities in a purple Emerson basketball jersey covered by a bright madras jacket. “It was great getting the Emerson community involved and it was nice to get off-campus and on-campus people involved in this kickoff to the season.”

In the last pre-midnight activity, Damon Turbitt, a sophomore journalism major, hit the first half-court shot of the night on his second attempt and won a gift card to Rock Bottom.

“[I] knew I had a decent chance, but didn’t think I would have a second chance to make it,” said Turbitt, who raised both arms in celebration as his shot rattled in.

Once the digital clock on the scoreboard struck midnight, the lights dimmed in the Bobbi Brown & Steven Plofker Gym, and the women’s and men’s basketball teams were introduced to the crowd.

After the introductions concluded, players organized into teams for the three-point shooting contest. Each team included one male player, one female player, and a fan.

At the end of two rounds, the team including freshman guard Elizabeth Horan and sophomore guard Michael Thorpe were named the winners.

The night’s main and final event, the dunk contest, followed directly after.

The 6-foot-6 Pinckney went first and attempted with the help of a teammate. Stationing junior point guard Eli Kell-Abrams on the floor above, which overlooks the gym, Pickney tried to dunk off a descending bounce pass, but failed on both attempts.

Goldberg, who is 6-foot-4, went second, and won the contest with a reverse dunk off a high bouncing self-pass that he threw from the baseline.

Once the night was over and the fans headed home, Motevalli-Oliner said she was excited to have helped bring Midnight Madness back to Emerson.

“It was awesome to see non-athletes come support Emerson athletics because that doesn’t happen very often,” said Motevalli-Oliner. “The Athletic Trust Fund’s really generous gift made it happen and it was awesome to let us do something like this.”

Sophomore Matt Williams, who attended the event, seemed to get drawn into the athletics spirit.

“It was pretty cool,” said Williams, who showed up dressed in a yellow jumpsuit, purple wig, and purple Emerson beanie. “I will definitely be coming back for games.”