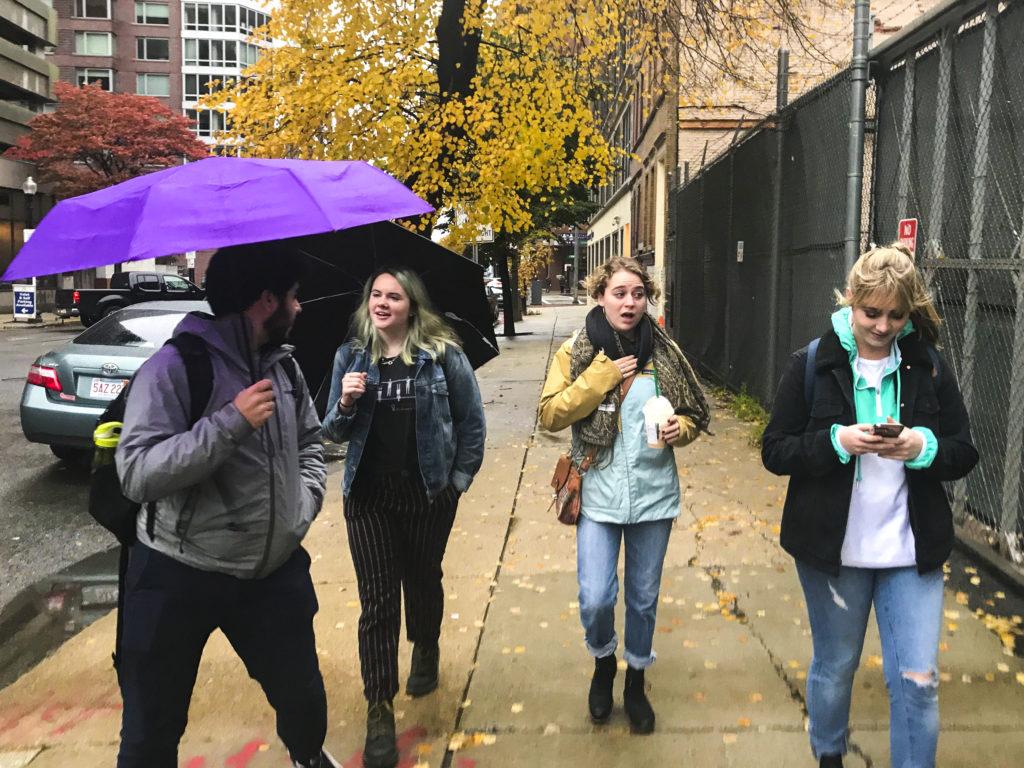 Four Emerson students made their way through the cold and rain to vote in the 2018 midterm elections. Stefania Lugli / Beacon Staff

Four students trudged through pouring rain on Election Day to cast their ballots for the 2018 midterm elections.

Junior Hannah Lemke, along with freshman Anna Stewart and junior Fiona Luddy, were led by junior David Fadul to the Benjamin Franklin Institute of Technology—a polling place about a half mile from Emerson for the seventh congressional district, where the college resides.

In 2014, 11 percent of Emerson students turned out for midterm elections— a figure seven percent lower than the national average among college students, according to the National Study of Learning, Voting, and Engagement. The same study states 65 percent of the college’s students were registered to vote.

Fadul, who woke up at 7 a.m. to vote before his 10 a.m. class, looks forward to a jump in the statistic.

“I’m hoping to at least crack 20 to 25 percent [of students registered to vote]. That’s a minimum,” Fadul said. “I would really love for it to go above thirty percent.”

Fadul worked in coordination with Director of Student Engagement and Leadership Jason Meier on various strategies to spread awareness on voting and the midterms. Fadul and Meier initiated email blasts, pop-ups on EmConnect, and organized a screen in 2 Boylston residence hall to depict why the election should be taken seriously, with gun control and climate change listed as their talking points.

Lemke, originally from Florida, registered to vote in Massachusetts in 2016, before voting in the presidential election. The 2018 midterm election is Lemke’s first cast ballot since then.

“I was very scared because I had gone inactive,” Lemke said.

A voter is labeled as inactive after failing to respond to an annual street list, also known as the town census, according to Massachusetts law.  A local election official then sends a confirmation notice to the inactive voter to confirm they still reside at the address listed on their voter registration.

“It was daunting to me, but it was a lot easier of a process than I expected it to be, which was really encouraging,” she said.

Stewart voted for the first time this afternoon.

“It was very exciting. I’m from D.C., where our votes are symbolic, it feels like. To vote in a place where it matters is really important,” Stewart said.

On the Massachusetts ballot are Democrat and Republican candidates as well as three ballot initiatives that place the future of nurses, money in state politics, and transgender protections in voters’ hands.

In March, Emerson joined a school coalition with Freedom for All Massachusetts to oppose ballot Question 3, which would repeal current transgender discrimination protections in the state.

“I really hope people talk about the ballot questions,” Fadul said. “There’s room for discussion on these. I hope to overhear conversations from students about the candidates and ballot initiatives.”

Luddy said she first stepped inside a polling place when she was younger, accompanied by her mother as she cast her vote. She is a first-time voter for this year’s midterms.

“I’ve never voted actually for myself. It feels cool to actually do something for my state,” she said.

Lemke, Luddy, and Stewart walked out of the polling place bearing grins and “I Voted!” stickers on their raincoats as Fadul waited underneath an umbrella for them.

The four students exchanged stories about their vote and tonight’s incoming results.

“The feeling of putting the little ballot into the machine was super cool and fun,” Lemke said about her experience.

Stewart said she recognized the value of her vote as a young, female college student.

“I hope it symbolizes progress,” she said.