The Berkeley Beacon • May 4, 2022 • https://berkeleybeacon.com/motions-of-emotions-alvin-aileys-boston-return/ 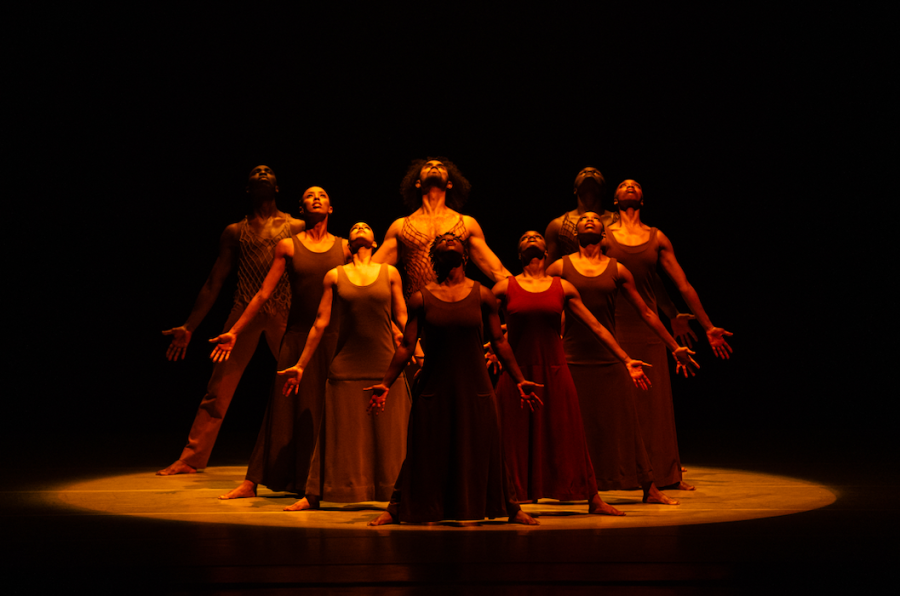 I grew up dancing in recitals and competitions, yet over the course of two decades, I have never been to a professional dance show—until now, and I was not disappointed in the slightest.

Alvin Ailey American Dance Theater returned to the live performance scene since 2019 at Boston’s Boch Center Wang Theatre April 28. Running through May 1 featuring dynamic pieces filled to the brim with talent, there are over a dozen works showcased each performance with its own unique programming.

The theater’s five-day run is part of the Celebrity Series of Boston’s “The Movement Series,” a three-part experience “focused on the American and diasporic Black experience as a unified whole.” Founded in 1958 by choreographer Ailey, the theater dedicates itself to exploring contemporary modern dance through the African American cultural experience.

The Thursday night program I attended, Contemporary Creations, opened with an introductory speech from Artistic Director and featured choreographer Robert Battle. While welcoming and explaining each showcased dance creation, I was eagerly tapping my foot with anticipation to see the stage come alive with movement. When the deep red curtain finally lifted to reveal the stage backlit with five rows of simple bright white lights, it was an instant attention grabber.

Resident choreographer Jamar Roberts’ striking opening number, Holding Space, looks at the state of the world from the past two years and focuses on healing through the perspective of dance. The isolated collective goes through the motions of emotions, clearly showing the separation from each other in three rows. While the dancing spoke for itself, the anxiety-inducing music and ever-evolving ominous lighting of the stage set the tone for the piece.

Maybe I’m biased, but dance is one of the best methods of storytelling. The simplicity and uniform costumes—a white bodysuit with sheer white pants—aided the effortless stage design, both done by Roberts, while the narrative was heavily influenced by lighting designer Brandon Stirling Baker. The middle section utilized one prop: a cube made of black framing, further symbolizing the concept of isolation.

As someone who has always leaned towards an introverted lifestyle, dance has been a comfortable space to express myself publicly without having to speak. Quarantine was an unexpected time to flourish into a new self by taking the time  to work on our own identities in seclusion—the main idea examined in Holding Space. I love the feeling that comes with the unspoken word and physical movement of the body, and each dancer a part of the ensemble didn’t hold back with this.

The repeated sequences embodied the monotonous feeling of early pandemic life, with dancers occasionally mirroring each other. In contrast, the highlighted individualized moves made clear the message of solitary, heavily expressed through solo dances in the center of the cube. Each dancer showcased moves in a way unique to their own, yet similar to the overall meaning of the ensemble’s movement. The fifth has their moment to shine—choreography that seems almost like improvisation because of how natural it flows—as four other dancers each handle a corner of the moving cube.

Throughout the 20 minute or so piece, the group interchanges, starting out as a large group and condensing to various duos, trios, and solos. Though the pandemic has mostly felt like a state of limbo, Roberts adds these sort of distinct moments in time as dancers move through the piece—the music adding a layer of the journey, becoming less stressful and more calming as the lights fade to yellow. It’s hard to pick favorites from the stacked program book, but my mind keeps drawing back to Roberts’ resonating creation.

After the first 15 minute intermission, Battle’s faster-paced Mass took the stage. The 16 dancer-cast perform a signature ritualistic style in ballet form to a unique score composed by John Mackey. The warm colored lights by Burke Wilmore, reflected off the similar colored religious-styled long dresses, by Fritz Masten, in an eye-catching way. The arrival of the first dancer was made to represent the Priest with a large black cross diagonally laid across his chest, setting the tone of the leading pivotal role he would play for the remainder of the piece.

Though there were frequent stand out roles, such as three leading females, the 13-minute long performance mostly moved through the momentum of the ensemble, in the essence of a church choir. There was a heavy reliance on foot work that seemed to frantically jump across the stage in the cleanest way possible. I was stunned at how fast the dancers could go horizontally across the stage by using only their peripheral vision to see the direction they were headed.

The large group really brought the piece together and made for great visuals, truly bringing the scene of the church and its followers to life. The specific rounded stance of the dancers’ arms made for a fun, interesting visual appeal. After this production, there was no question as to why Battle has had a successful decade of leadership, as the company celebrates his 10th anniversary this season.

Following the second intermission, the girl next to me excitedly whispered “I love this part” as Ailey’s classic Revelations began, and I soon realized why.

The stage illuminated a warm-toned center circle as the group started in the formation of a pyramid, dressed in plain outfits of different shades of brown. This production had three designated sections: “Pilgrim of Sorrow,” “Take Me to the Water,” and “Move, Members, Move.” The traditional music stepped away from strictly instrumental and was the first to feature singing voices, particularly those of a classical choir. Between Ves Harper’s stage decor and costumes, Nicola Cernovitch’s lighting, and Barbara Forbes’ redesigned “Move, Members, Move” dresses, everything tailored and complemented the main stars.

I’m not sure if it was hard for facials to be accentuated for the whole theater to see or if it was an artistic choice to do minimal expressions, but it tended to take me out of the theatrics a bit if I contemplated too hard. Regardless, the dancers looked gracious across the stage, especially a smaller group wearing all white, depicting baptismial events in the second part. Two long blue fabrics stretched across the stage as the dancers flowed and waded through just as if they were water.

The small additions of props, such as the white umbrella in the second part and the fans and stools in the ending part, brought even more imagery to the already existing moving picture. Watching videos of dances is great, but live performances are something else. You feel the energy transport from the dancers and the life they create onstage to the rows of seats ahead of them. Every single person, front or back, is essential to the workings and viewings of the choreography, and that is prominent in AAADT’s shows.

A beautiful duet entitled “Fix Me, Jesus” in the style of classical ballet featured members Jacqueline Green and Michael Jackson, Jr. She had legs for days, and even without the support of Jackson, she could hold her posture eerily still and high. Using minimal stage space, keeping to a small lit circle, the dance felt delicate, intimate, and whole.

Energy really shined with the shining trio of “Sinner Man.” Each male dancer dressed in only black pants and black jazz shoes took the stage from corner to corner, as if they were performing a gymnastics floor routine. Honestly, it would’ve been believable if the floor suddenly turned into a mat because the height, strength, and length the dancers reached were seamless and seemed nearly impossible. At one point, all three imitated each other at slightly different timings lined in a diagonal, constantly moving into the most satisfying visual of a leaning tilt to the ground.

The closing piece, “Rocka My Soul in the Bosom of Abraham,” had the crowd clapping along to the brightly happy big company performance, showing life was brought to the stage until the very end. The yellows popped, beaming sun rays from the male and female partnered moves. This dance felt the most exaggerated, giving the upbeat spunkiness of musical theatre dance.

While I love to dance myself, I am forever fascinated by others who can just move their bodies in the right ways, making it seem effortless. The members of AAADT know how to captivate an audience in a way that any minor glance away from the stage is a loss of a pivotal moment. Whether silence falls through the theater or music fills the speakers, watching the elongated lines and energetic jumps will have people holding their breath, clutching the edge of their seats.