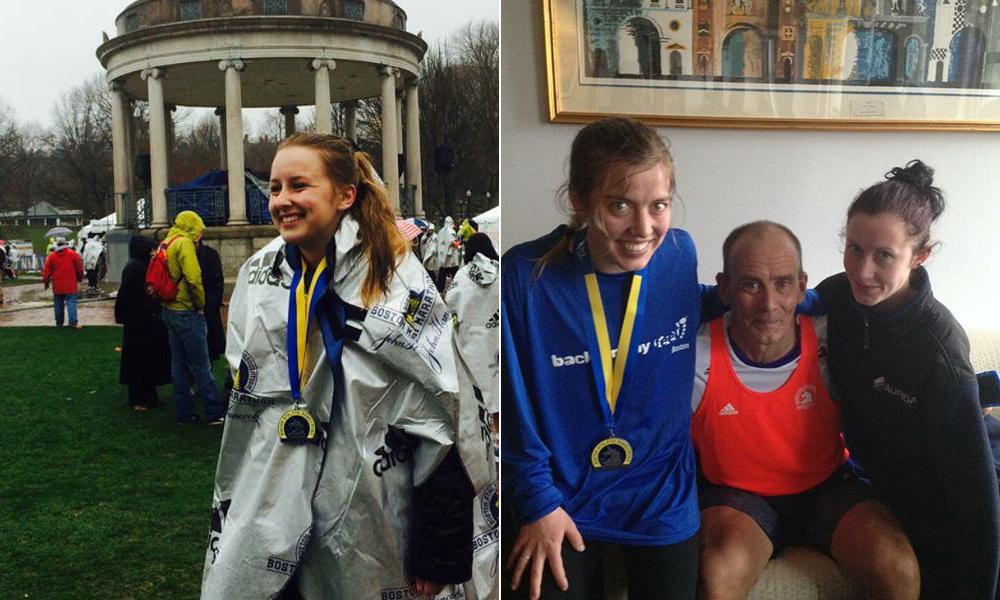 Kennedy, a junior communication studies major, ran Boston for the second time this year, finishing in four hours, 18 minutes, and 13 seconds, with an average pace of nine minutes and 51 seconds per mile, according to the official results.

“I didn’t do as well as I’d hoped, but it was still a personal record for me,” said Kennedy. “The conditions were pretty tough, so all things considered, I was happy about it.”

Her previous fastest marathon time was four hours and 31 minutes in the New York City Marathon.

Kennedy, 21, said that although she had run the course before and knew what she was getting herself into, it was still harder than she expected. She said it was her father, with whom she was running the race for a second time, and the spectators along the streets that kept her motivated.

“Seeing [my dad] right in front of me made me want to keep going and keep up with him,” said Kennedy. “Once I got to the top of Heartbreak Hill, I was in a lot of pain, and all I wanted to do was stop, but [the Boston College students] were so supportive that I actually started crying. But I never stopped running, and I definitely have them to thank for that.”

Kennedy said she plans to run Boston next year, and in the meantime, will be training for the Marine Corps Marathon in Washington D.C. this October.

Ashbaugh, a freshman political communication major, said she had originally hoped to run her first marathon this year in under four hours, but when she was put on crutches just a few days before the race, her goals shifted a little.

“I just want to run and finish and enjoy my experience,” she told the Beacon before the marathon.

Ashbaugh, 18, finished in four hours and 34 minutes, with an average pace of 10 minutes and 29 seconds per mile.

“For my first marathon I’ve just come to accept my time and move on,” said Ashbaugh. “I started the first half at a pace that would have broken four hours if I kept it, but around mile 16-17, right before Heartbreak Hill, my knee started to give in and I just struggled the rest of the race.”

Ashbaugh said the weather that day was a major factor.

“It was raining and 40 degrees the entirety of the race, which was really difficult to run through,” she said, “especially since I was wearing shorts and a singlet.”

Like Kennedy, Ashbaugh said she found motivation in the people she saw standing on the sidelines.

“I knew my [Alpha Epsilon Phi] sisters were at the finish line, and my boyfriend and all of his friends were at Kenmore Square waiting for me to arrive, and I just had to keep going,” she said.

Although she said she doesn’t intend to run another marathon anytime soon, Ashbaugh said she wouldn’t trade the experience for anything, and does plan to run two half-marathons this summer in her hometown of San Francisco.

“Half-marathons are a much more manageable and relaxing race,” said Ashbaugh. “I’m not sure if I will run Boston again, just because it turned into a full-time job for me, between the fundraising and the training, but I’m sure in a few weeks I’ll be wanting to do it all over again.”