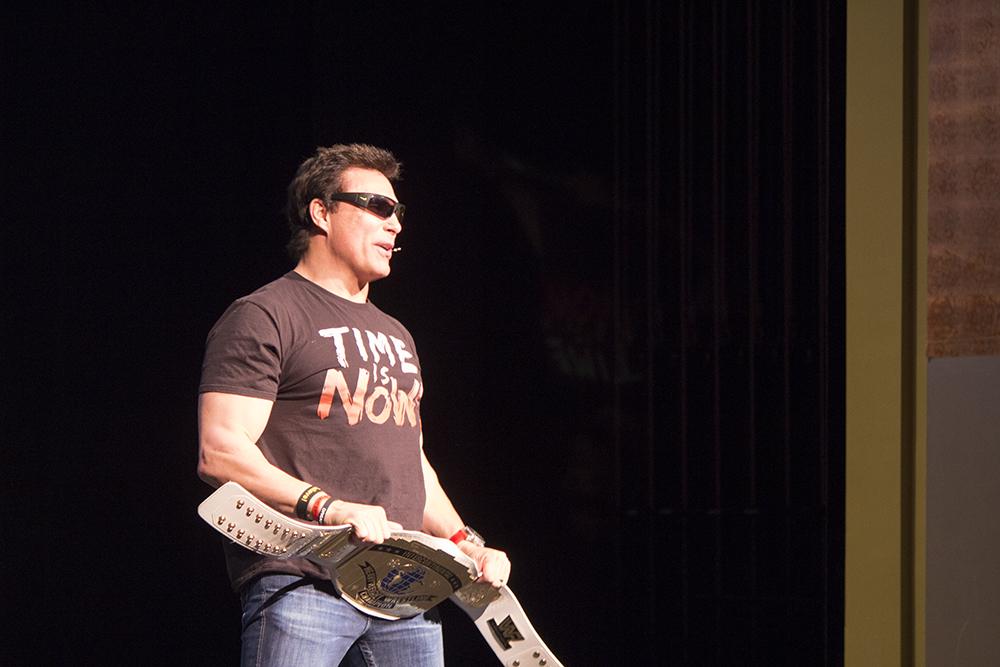 Much of Mero’s talk focused on his life story and his desire to uplift Emerson’s students as they strive to reach their goals, with reminders of his boxing and wrestling careers intertwined throughout.

“Athletics is so much like life,” Mero said in an interview with the Beacon. “What you put into it is what you’re going to get out of it. So many times, a great athlete is someone that really trained hard and worked hard, and, same thing with life— going after your dreams and goals and not becoming complacent.”

The introduction reminded the crowd of the best of Mero’s career: fame and success. One of the first video results on a Mero Google search features one particular bout with Dwayne “The Rock” Johnson, one of the biggest names in pro wrestling.

But Thursday night, as Mero spoke of the worst moments of his life, he always came back to one word: Choice.

He talked about the choices he made, including bouts with drug and alcohol abuse, that weakened his bond with family members. He lamented not attending his sister’s high school graduation and ignoring his little brother’s requests to play baseball in the backyard. He recounted the loss of four family members, including the deaths of his sister and brother.

Mero issued a call to action, inviting Emerson athletes who were moved by the presentation to head back to their room and send a family member a message of love or compassion. He said the blows he took in his personal life reminded him of time lost or wasted with those to whom he was closest.

Freshman women’s basketball player Leena Kardacz said she could relate to Mero’s words when thinking about the loss of her own father. She said he conveyed his tragic timeline with emotion that could touch anyone, regardless of background.

“I felt like I could really relate to what he was saying,” Kardacz said. “But even if somebody hadn’t gone through any of those kinds of things, this all could have related and [they could have] found something in that speech that touched them.”

Patricia Nicol, Emerson’s athletic director, said after the event that the presentation was thought-provoking.

“He really made you rethink and bring to the forefront of your thoughts what is really, really important in life,” Nicol said. “I think for this young audience, that was a real, gentle reminder.”