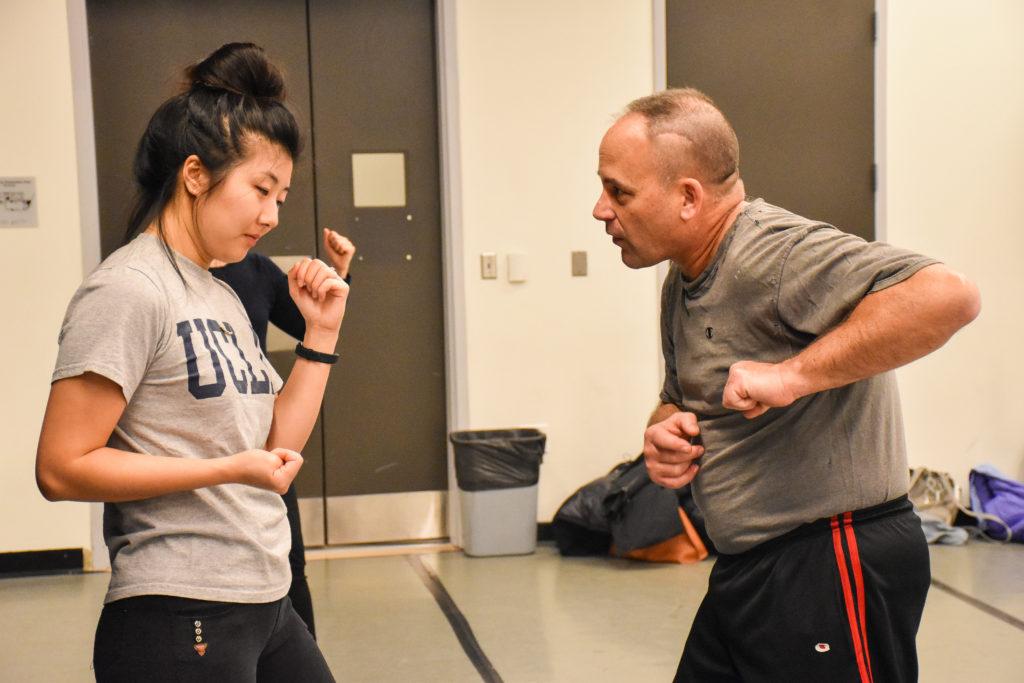 The Paramount Center studio 4 was filled with laughter and cheers of support as sophomore Lauren Licona slammed her fist down on a punching pad on Dec. 7.

“It was a very inclusive environment where we were all supporting each other,” junior Madi Doelling said. “It also felt very good to just punch things.”

While standing in a circle, warming up with stretching exercises, the participants discussed their reasons for attending the class. The most prevalent was a desire to learn how to defend themselves when they were out at night or by themselves.

“We were all there [to] learn how to defend ourselves for pretty much the same reasons, like walking home alone,” Doelling said.

Participants first learned how to adopt a defensive stance — their feet facing forward and shoulder width apart, balanced equally between both feet with their hands out. Next, the class progressed to basic blocking and punching. Afterward, the class covered different ways to kick an assailant using front, side, and roundhouse kicks aimed at the knees. Finally, students learned how to break out of an attacker’s grasp by combining what they learned so far and manipulating their assailant’s joints.

Students were encouraged to bring their own experiences and experiment with tricks that worked best for them. One such moment occurred when freshman Tiana Oliveras learned to yank herself out of her assailant’s grasp instead of punching their forearm to escape.

“We’re not gonna turn any participant into an MMA fighter,” Schiazza said. “We’re showing people some self-defense moves to create distance to run away.”

ECPD previously offered a program called Rape Aggression Defense that involved the use of nationally certified instructors, such as Schiazza, that took place in three sessions between three and four hours each. Schiazza said many Emerson students did not attend the program because it was too long.

The ECPD class has many of the same principles as RAD but with a looser curriculum and a three-hour time frame. ECPD plans to host two more self-defense classes open to all genders next semester.

Participants left the class slightly sore, but still laughing and smiling as they discussed what they learned.

“They gave us a lot of useful tips that I wouldn’t have thought of,” Oliveras said. “Before coming here I would’ve thought just keep punching them and maybe one knee kick.”