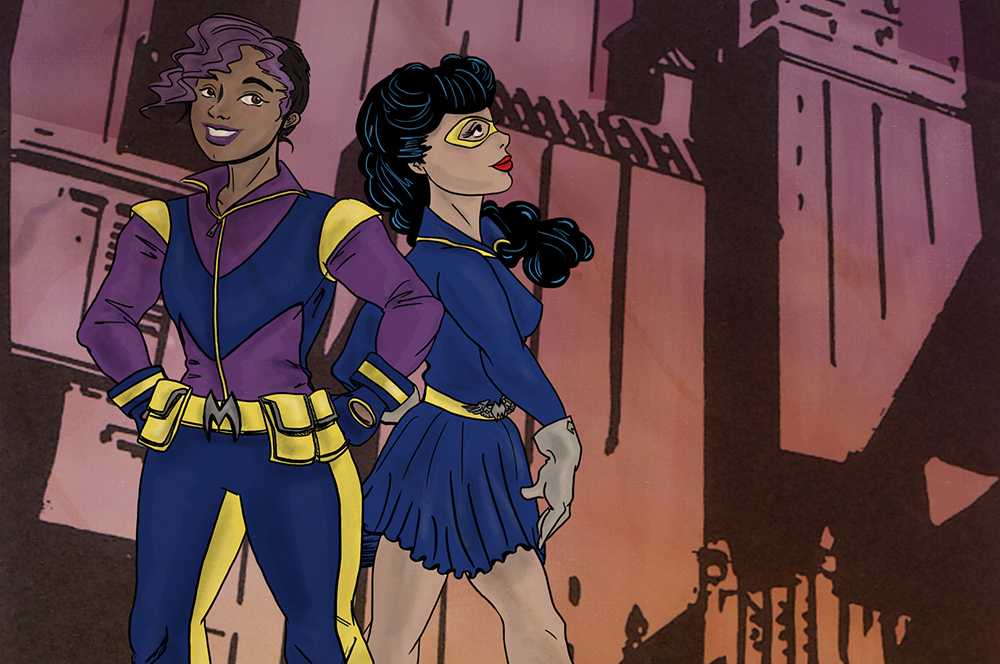 Ms. Meta arrives in the 1940s, desperately hoping to stop her archnemesis from fulfilling his evil plot. The villain is trying to change the course of history by bringing modern technology to the age of World War II. But Ms. Meta has a plan.

Sarah Zaidan is a visual and media arts professor at Emerson College, a fellow at the Engagement Lab, and creator of Ms. Meta, a female superhero whose name is short for “metamorphosis.” Zaidan said she is in the process of creating a video game focused on breaking down stereotypes of different people and decades through the game’s protagonist and setting.

This idea came from Zaidan’s doctoral program at Kingston University London, where she received her Ph.D. in superhero art. For her thesis, Zaidan said she studied the history of these characters, with a focus on masculine figures dating back as early as 1940. This research serves as the basis for Zaidan’s game where, as the main character, Ms. Meta will travel back in time to a setting made to look like an interactive comic book, with the game scrolling from the right-hand of the screen to the left, according to Zaidan.

Jordan Pailthorpe, a producer who helps to manage projects at Emerson’s Engagement Lab, will oversee the process.

“I think it’s really interesting, her idea of doing something that is allowing us to see the history of comics, but then have this layer of really doing a deep dive into women’s representations and misrepresentations in comics,” Pailthorpe said.

The game is broken up into decades, with every segment having 10 missions, one for each year in the period.

Ms. Meta must figure out how to defeat her archnemesis, who is still in development, in each level so the future remains unchanged by the modern technology the villain brings back in time. Unlike many other games, Ms. Meta has the opportunity at every chance to decide how she wants to combat this challenge—either by fighting with fists or with other tactics like negotiation, Zaidan said.

Pailthorpe said the concept of choice is unique, especially for a game with a female main character. According to Pailthorpe, games with a female protagonist usually only allow women to reason, and they typically avoid violence.

Pailthorpe said an interesting aspect of the project is that a majority of the development team will also be women.

“We don’t really talk about that [female developers] as often as we should,” Pailthorpe said. “Not only how the game’s themes are about women’s representation, but also about who’s making it, and [how] allowing that type of diversity within the project will help capture that essence; at the least it feels more unified from production to release.”

Another distinction is that Zaidan said users will be able to create their own Ms. Meta character at the beginning of the game.

“I looked a lot into player customization for her character,” Zaidan said. “I was thinking about that sense of ownership, [the player] had a hand in creating a character. I want people to create a Ms. Meta as the superhero they want to play as.”

The decades Ms. Meta will visit will be accurately depicted, according to Zaidan, thanks to her extensive knowledge of each decade.

For example, Zaidan said to create the 1940s, she researched at Harvard University’s Schlesinger Library, exploring its extensive collection of periodicals—specifically ones aimed at women. The characters are meant to transcend period stereotypes. Zaidan said this was inspired by another video game, “Valiant Hearts: The Great War,” which created its characters based off personal letters from World War I.

Zaidan said she read Ladies’ Home Journal  and discovered a column called Diary of Domesticity by a woman named Gladys Taber who, unlike the standard 1940s housewife, had a master’s degree, had written over 40 novels, and was a divorcee raising her kids on a farm with her friend.

“These people have lives and had ambitions and dreams and no one knows about them,” Zaidan said. “I want the player to be aware the 40s was not just a sea of white faces, and that many different people attributed to its history.”

Through this technique, Zaidan said she hopes the game is not only enjoyable for players but informs them of generally unrepresented people. She said she hopes it comes off as educational.

A demo of the game is set to be released in June thanks to a grant from the Engagement Lab which will help her build her game, Zaidan said. Student interns at the lab will also be helping the development team.

“We have truly amazing students here at Emerson—I’m consistently blown away by the students here,” Zaidan said. “I’m looking forward to working with them.”