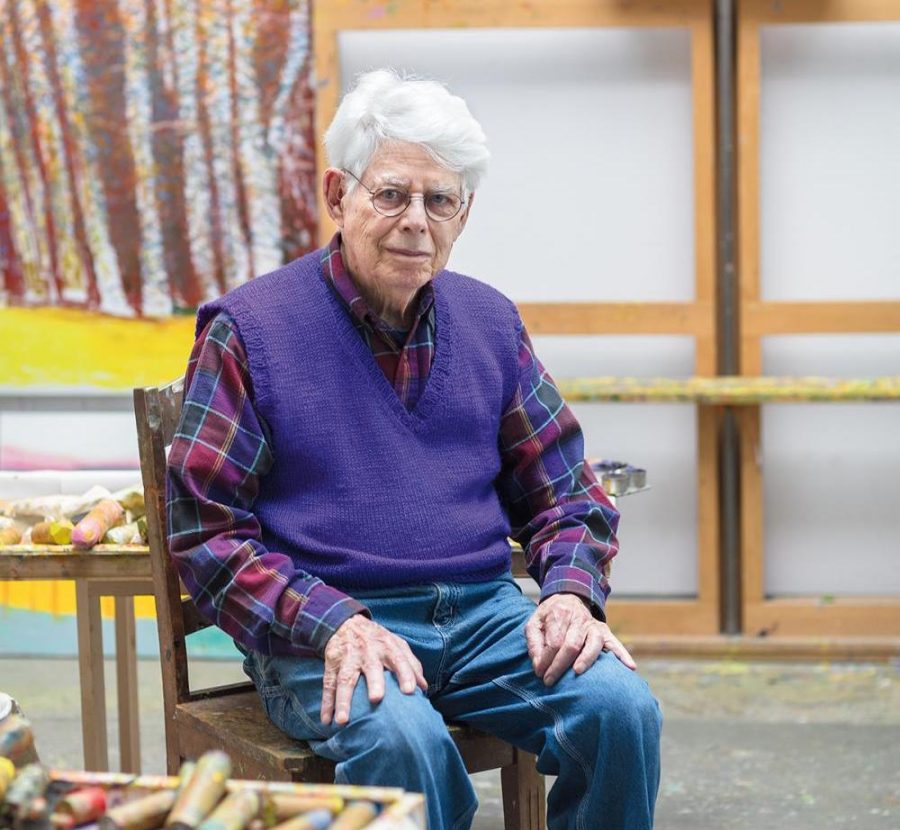 Cecily Kahn remembers the many times she would accompany her father, Wolf Kahn, to find new subject matter for him to illustrate. Wolf Kahn was a renowned artist who frequently sought inspiration from the Vermont countryside where they lived.

“He would often take us drawing,” she said. “He would have people drive him around the countryside to find old dilapidated farms to draw on the side of the road, then he would take them to get hamburgers at nearby diners.”

Wolf Kahn was a German painter, known widely for his vibrant and unexpected color palettes and his detailed landscapes. His work is frequently shown in the Museum of Modern Art in New York City, the Museum of Fine Art in Boston, and the Smithsonian American Art Museum in Washington, D.C.  Kahn was a Fullbright Scholar and a John Simon Guggenheim Fellow. He was also a Board of Trustee member at Marlboro college and frequently donated to their arts program.

Kahn died March 15 from congestive heart failure at his home in New York City. He was 92 years old.

Cecily Kahn, one of two of Kahn’s daughters, said she had a very nontraditional childhood being raised by two artists. During her childhood summers, she said they lived above his dilapidated studio in Marlboro.

“Often I remember having the landlord come in and try to take our mattresses away, it was an illegal residence and not in the best part of town,” Cecily said in a phone call interview from her Maine residence.

Wolf Kahn was born in Stuttgart Germany in 1927 and came to the United States in 1940, according to his website. Through the next ten years, Kahn graduated from the High School of Music & Art in New York and started to work under Hans Holfmann, another German American painter who helped define abstract expressionism. Kahn went on to complete a Bachelor of the Arts degree from the University of Chicago in only one year and in the 50s and 60s, began presenting solo exhibitions at prestigious museums.

Kahn lived mostly in New York City but owned a house in rural Vermont by Marlboro College where he spent his summers. Frank Stout, art professor at Marlboro and Kahn’s close friend, introduced him to the small liberal arts college in the 1970s. Cecily Kahn said Stout convinced her father to join the institution to help out with the arts department.

Marlboro President Kevin Quigley remembered his close friendship with Kahn, and the countless contributions he made to the Marlboro community.

Kahn worked at the college, grading and judging students’ final capstone projects. He also contributed money toward equipment and facilities, joined the board of trustees in 2003, and loaned several works of art to the college and to Quigley personally.

Cecily Kahn said her father was always creating and working tirelessly through all of his accomplishments, including assisting Marlboro’s art programs which he hoped would set a precedent for all up-and-coming artists around him.

“He always shared his success with others,” she said. “He was a great person and a great dad, He just influenced so many people in so many positive ways—it’s overwhelming.”

Quigley said he received the news of Kahn’s death Sunday afternoon in an email from Melany Kahn.

“I felt sad about his passing, but also grateful personally to have known and spent time and developed a friendship with him,” he said.

“Wolf was fundamentally incredibly passionate about his art and about life,” he said. “He painted everyday until very near the end. He had a remarkable commitment to his art.”

Quigley said he remembers going to Kahn’s house in June 2019 to present him and his wife, Emily Mason, with honorary degrees from Marlboro. The couple were scheduled to receive them at Marlboro’s 2019 commencement ceremony but were both too ill to attend. So Quigley said he and Marlboro’s Board of Trustees Chair Richard Saudek went to Kahn’s house fully dressed in their ceremonial gowns and formally issued the degrees in the living room.

The last time Quigley saw Kahn was in October 2019. He stopped by the painter’s house to give him a framed photo taken from when the honorary degrees were issued for Kahn’s birthday.

“Wolf is a guy who likes gifts,” Quigley said with a chuckle. “And he was sitting outside in a lawn chair waiting for me.”

Miles McEnery, owner of the Miles McEnery Art Gallery in New York City and representative of Kahn, said he and the painter were like family.

“I talked to him almost daily and saw him weekly,” McErny said in a phone interview from New York City. “Wolf lived an extraordinary life, was a kind man, loved jokes, loved reciting poetry, and loved a good cheeseburger.”

McEnery’s gallery hosted Kahn’s work for twenty years and the two put on six shows in that time. McEnery said they first met in the 1990s and then later reunited at a dinner hosted by the New York Academy of Art. After the dinner, Kahn invited McEnery back to his studio and their friendship took off from there.

McEnery said he vividly remembers the dinners he had with Kahn and his wife, winters in New York City where he would grab lunch at local spots with the painter, and the relationship he forged throughout this time spent with Wolf and Emily’s two daughters.

“We would share many of life’s special moments together,” McErny said. “Everybody in Wolf and Emily’s orbit were close and I was lucky to be a part of this orbit.”

Although the loss is one that impacts both the professional and personal life of McErny, he said he was comforted by all that is left to represent Kahn’s life.

“He taught me so much,” he said. “The world seems a little darker, but I take comfort in the fact that he leaves behind a great legacy through his paintings.”

Corrections 4/6: A previous version of this article incorrectly stated that Kevin Quigley learned of Wolf Kahn’s death from Cecily Kahn, that Kahn had donated works of art to the college, and incorrectly stated when Quigley saw Kahn for the last time. These have all been corrected.