Navigating the ‘worlds’ of storytelling 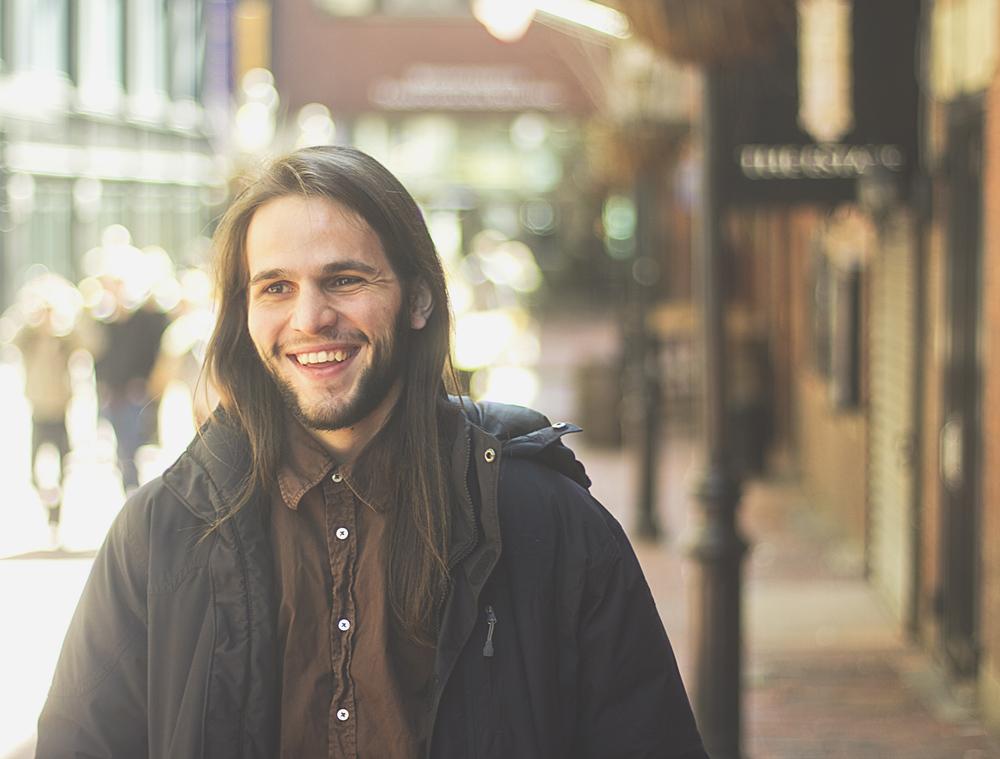 Student filmmaker Eli Powers is projected on a screen 50 feet across. He’s roughly 10 feet tall, with a face like a moon and hands that could pluck you straight from the audience, like some kind of gawky, college-age Godzilla.

Currently studying in Los Angeles, Powers couldn’t physically attend the screening of his short film Alone at Last at Emerson’s 14th Annual College Film Festival, or the Q-and-A that followed it. The other directors are all lined up at the front of the Bright Family Screening Room, with a live Skype feed of Powers (along with John Bickerstaff, a student director in a similar position) projected above their heads.

When Powers speaks, his voice booms. When asked about his film — a serious piece about a young couple facing the apocalypse — he just cracks jokes. He watches, not without amusement, as the other directors describe their struggles to capture abstract concepts in film — betrayal, anger, sadness, disillusionment, gender — and he notes, not without seriousness, “We all really just want to talk about our feelings.”

Joking or not, Powers isn’t wrong. One is reminded of renown director Stanley Kubrick, who once said that a good film is more like music than fiction: mood and feeling come first, then meaning. It’s the common thread that holds together a festival program that otherwise couldn’t be more different.

The festival, originally an alumni outreach event at the Los Angeles campus, was celebrating its third year in Boston. Kevin Bright, founding director of Emerson Los Angeles, discussed the move in his speech at the festival’s reception.

“It was obvious that the heart of it belonged to you here on campus,” said Bright. “We wanted to be able to feature as many of your films as possible.”

According to Anna Feder, the festival’s programmer, the original L.A. event would usually only showcase four or five films, mostly narratives. This year’s 18 films were chosen from over 100 submissions, and included a much more diverse body of work.

Some films, like Advent, directed by senior visual and media arts major Bickerstaff, were long in development and faced tremendous evolution during production. Advent, a BFA thesis project, took an entire year to create, and, at 26 minutes, was the longest film screened at the festival.

“We started with ‘space is cool! The ‘50s are cool!’,” said Bickerstaff, speaking to the audience through the same Skype call as Powers, “and somehow it evolved to be about the struggle between old and new.”

Other projects were shot in a matter of days or even hours. Director Yuhaojie Zheng, a junior visual and media arts major who had two films screened at the event, created his six-minute Krasa in a 12-hour whirlwind. To make things even tougher, Krasa was shot in Prague, with Austrian actresses.

“English is my second language, so it’s already difficult for me to communicate sometimes,” said Zheng. “And my actresses didn’t speak a word of English! Luckily my producer could translate.”

The technology used to shoot the films also varied. Nearly every team worked with different cameras, each with unique advantages and challenges. Some directors used modern digital film, while others stayed true to traditional reel technology. Pablo Calderon Santiago mixed old and new, shooting his seven-minute Hard Reboot on physical film before scanning it in for digital editing.

“As much as I love those old flatbed analog editing systems, well—” Santiago trailed off with a grin, throwing his hands in the air in defeat. The film students in the audience all laughed.

“We had more work than ever this year, and more diverse work,” said Feder. “There was narrative, documentary, experimental. We had to find some way to group them thematically.”

Even Santiago, whose film Hard Reboot focused on a single character willingly isolated from the world, said he tried to deal with humanity and relationships.

“Or rather,” he added, “A lack of them. I wanted to point out the kind of vulnerability and sacrifice you need to make to have relationships.”

In the end, the fesitval was won by sophomore visual and media arts major Pamela Mora.

“It’s a teller and listener relationship,” he said, “I was inspired by the stereotypes about prostitutes. Stereotypes come from what people tell other people, like a story.”