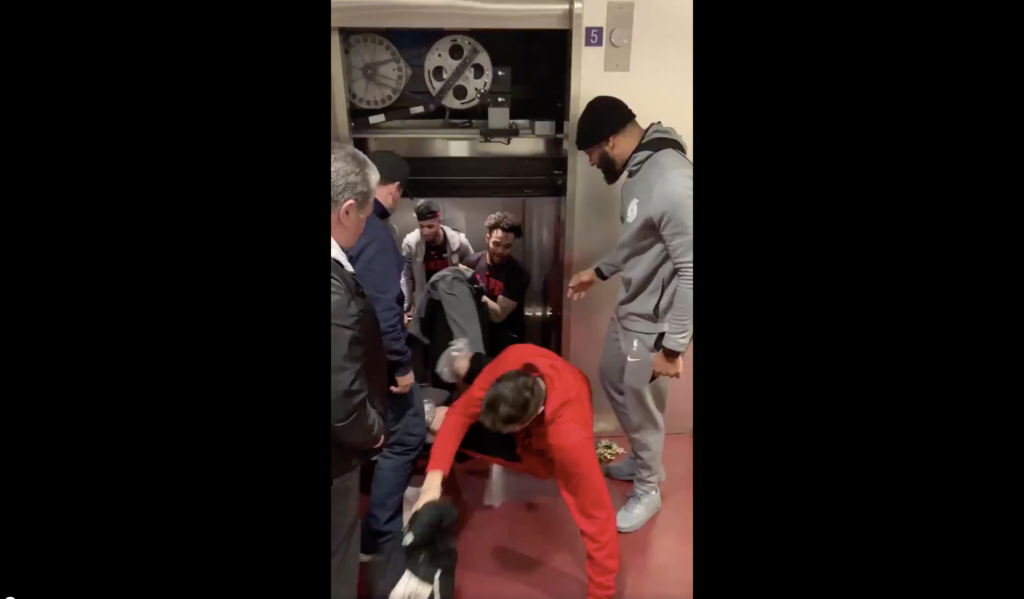 Members of the Portland Trail Blazers climb out of a Piano Row elevator. Photo by @meyersleonard11/Twitter

An elevator near the gym in the Piano Row residence hall trapped seven players from the NBA Portland Trail Blazers for approximately 30 minutes on Tuesday, according to a team official.

Players involved in the incident include Damian Lillard, Evan Turner, Enes Kanter, Rodney Hood, Meyers Leonard, Gary Trent, and Zach Collins. Kanter posted a video on Twitter that showed the players waiting in the elevator and eventually climbing out—the video had over 477,000 views as of Feb. 27.

Stuck in the elevator with the squad ??‍♂️ ? @trailblazers pic.twitter.com/2Yu5zrdFfH

The team was practicing in the Steven Plofker and Bobbi Brown Gym in preparation for their game against the Boston Celtics at TD Garden on Wednesday night. No one was injured, and the incident did not affect the team’s schedule.

Last semester the Beacon reported that on-campus elevator entrapments doubled from spring to fall 2018. One student compared an incident they experienced in October 2018 to Disney World’s Tower of Terror ride. Incident journals provided by the Emerson College Police Department do not detail any elevator entrapments so far in the spring 2019 semester.

After the Emerson College Police Department reviewed the security footage the next day, Michelle Gaseau, the college’s director of media relations, said in an email to Beacon that the players were stuck for closer to 30 minutes.

“We’re in survival mode now,” Kanter said in the video while Collins pretended to ration a power bar.

Some college students clapped and cheered as the team climbed out of the elevator on the second floor and walked down the steps to the first floor.

Freshman Michael Logerwell watched his favorite basketball team’s practice and then went upstairs to wait for a picture. While he was waiting, he noticed a rookie on the team and an equipment manager laughing.

“They were laughing and trying to yell through the elevator door—it was really funny,” Logerwell said.

Both an elevator technician from Delta Beckwith Elevator and the college facilities staff helped retrieve players out of the elevator, according to an email from Assistant Vice President for Facilities and Campus Services Duncan Pollock.

Updated: This article has been updated to include who retrieved the players from the elevator and information from the Director of Media Relations at the college.