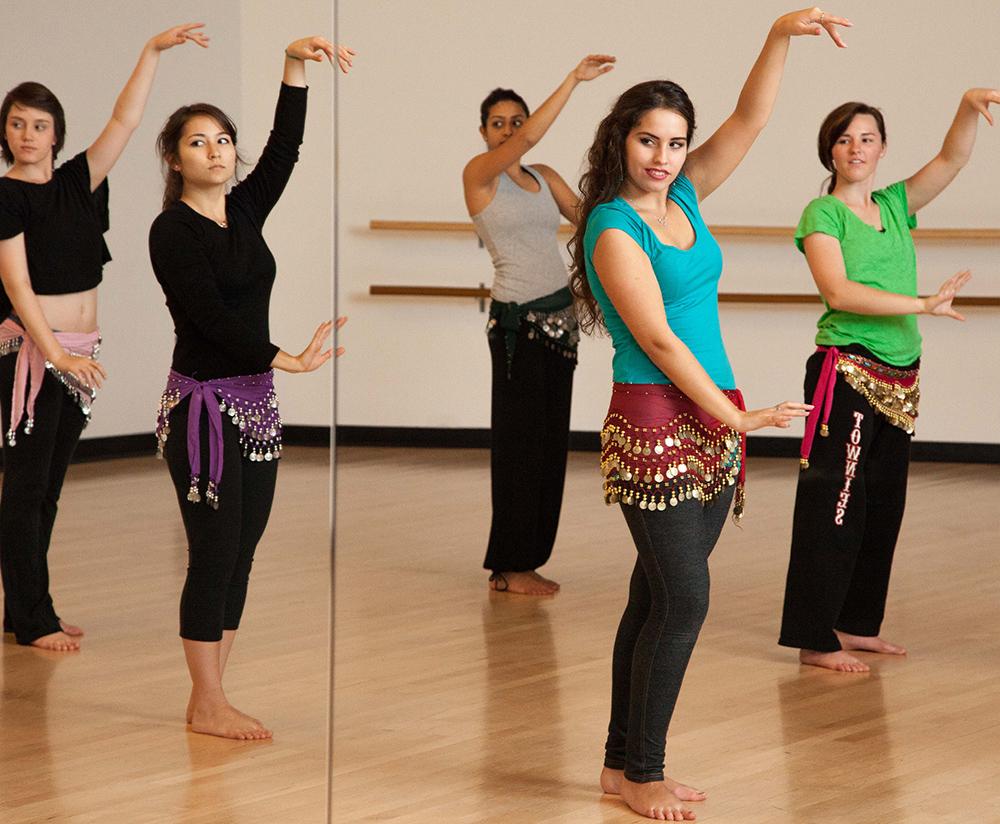 Walking through the Paramount studios on any given Wednesday night, groups of Emerson students can be found practicing for their classes, rehearsing for shows, and preparing for upcoming auditions. But from outside one studio, the beating of a drum and an explosion of Middle Eastern music can be heard. There, in the middle of the room, a group of Emerson students stretch and prepare for a fun-filled, hour-long dance session.

This is Emerson’s belly dancing class.

The weekly event, instructed by sophomore performing arts major Cristina Scherban, is new to the school this year, providing students with an opportunity to expand their knowledge and skills in the Middle Eastern art.

“I’ve been belly dancing for about seven to eight years,” said Scherban. “I really wanted to spread awareness of the culture. I want to bring more diversity to the school.”

Throughout the class, Scherban said she teaches students various techniques, starting off with basics and then moving on to more complex moves. The warm-ups consist of very simple hand, arm, head, and hip movements that she said get the blood flowing and get students ready to move into more elaborate dancing.

After a few minutes of warm-ups, Scherban said she leads the class in learning a variety of new moves, which change each week. These range from “snake arms” — a process of moving your arms up and down in a snake-like motion — to hip lifts, which Scherban said is an essential belly dancing technique.

According to the class’s co-founder, sophomore performing arts major Manisha Tolani, the class is a great way to connect people from different backgrounds. She said they welcome any experience level, adding that the main goal is to have fun.

“We wanted to make it something that people really enjoy,” said Tolani. “Something fun, something to relax, and a way to meet people, since that’s what Emerson is all about.”

According to Scherban, the class started off as a few girls getting together and playing around, experimenting with belly dancing moves in their free time. Last spring, Scherban said, they decided teaching lessons to the Emerson community would be a great opportunity for them to share their knowledge and techniques.

Sophomore performing arts major Emmy Ross said she has attended the class many times and said it helps her relax and learn about herself.

“We have one of the most inspired leaders of a club,” Ross said. “We just get together and belly dance. You can feel good about yourself and let go for an hour.”

Amanda Canny, a sophomore communication studies major, said the class gave her a chance to expand her love for dance and try a different form.

“I…have never done belly dancing,” Canny said. “By adding it to my repertoire, it makes me a better dancer because it’s from a different culture. [The club leaders] are accepting and want to teach everyone.”

The class and its goals are part of a larger Emerson student movement, known as Emerson International, according to Scherban, who runs the organization with Tolani. The initiative, she said, is geared toward creating an accepting and comfortable environment for all students, especially those from other countries or cultures.

The belly dancing lessons are held every Wednesday at 7 p.m. in the Paramount studios, and details are posted on Emerson International’s Facebook page.

Tolani said one of the main goals of bringing belly dancing to campus was to create awareness for what she considers a lesser known culture.