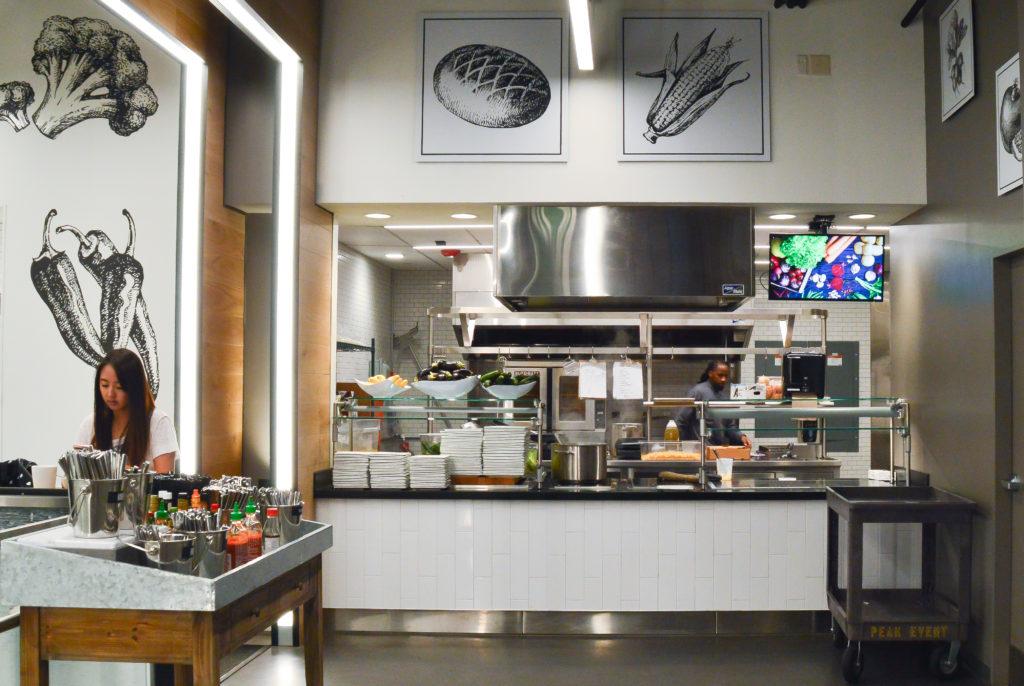 The transition came following students’ concerns about the quality of the food provided, according to James Hoppe, vice president and dean of campus life.

Hoppe said in an interview students will have a variety of new choices, including a crěpe station, a power bowl station, a global station highlighting international cuisine, and an à la carte sushi station in Center Stage.

Around 90 former Sodexo employees remain at Emerson, Pollock said. He said a union agreement gave the employees the right to interview and stay with Bon Appétit. The hourly employees have similar pay and benefits, but do not receive less than they did with Sodexo, Pollock said.

The company has more serving staff, but Emerson is working to prevent a price increase for students by taking the risk of profits and losses for the next two years. Both meal plans and meal plan prices will not change for the 2018-2019 school year, but it may change in the future, Hoppe said.

Pollock said Bon Appétit will not raise prices of items in other on-campus eateries such as the Max and the C-Store, and will potentially lower prices in the C-Store if it makes profit in September.

Bon Appétit was part of the bid process when the college selected Sodexo, so the school was familiar with the company, he said. In addition, he said they were aware of Bon Appétit’s performance at other schools.

There is a revamped vegan and allergen-free station on the first floor of the Dining Center, where food is cooked on a separate grill to reduce cross-contamination.

“Bon Appétit was one of the leaders of the farm-to-table movement, and they brought that philosophy to their colleges,” Hoppe said.

“When I talked to my new students, they seemed pretty impressed with the food,” Scher said.

However, Scher said she thinks the new food tastes the same as Sodexo.

“Since actually going in there to eat, it tastes pretty much the same as far as flavor and options go,” she said.

Bon Appétit also introduced a new system regarding take-out containers for students on the go.

To use the containers, called Eco-clamshells, students tell the cashier they want food to-go and either present them a key tag, called a Eco-clamshell Exchange Token, or a returned empty container, according to Bon Appétit’s website. When students are finished, they return the empty container and the cashier will give them another key tag. Students are not allowed to eat food out of the containers while in the Dining Center, according to the website.

The new dining services are locally managed and allow the chef to decide what food will be served, Hoppe said, rather than follow a national program. Because the chefs are not limited by a corporate menu, they can adjust food for spices and ingredients and prepare more food on-site, he said.

“I think students are going to hopefully notice that more is made on-site—salad dressings, soups, things that go on the salad bar. There’s an emphasis on fresher produce and ingredients,” Hoppe said.

Hoppe introduced a new meal ticket system with punch cards. When students with a meal plan swipe into the DC, they will receive a meal ticket they can show to Center Stage staff. This allows them to return to Center Stage as much as they’d like, he said.

Bon Appétit allows for more flexibility with stations, Hoppe said. If a station is unpopular, the manager will be able to replace it or tweak it.

Hoppe said student feedback is valued during this transition. He said students can talk to the managers, Department of Campus Life, or SGA about their dining experiences.