New EIV game show will pit orgs against each other 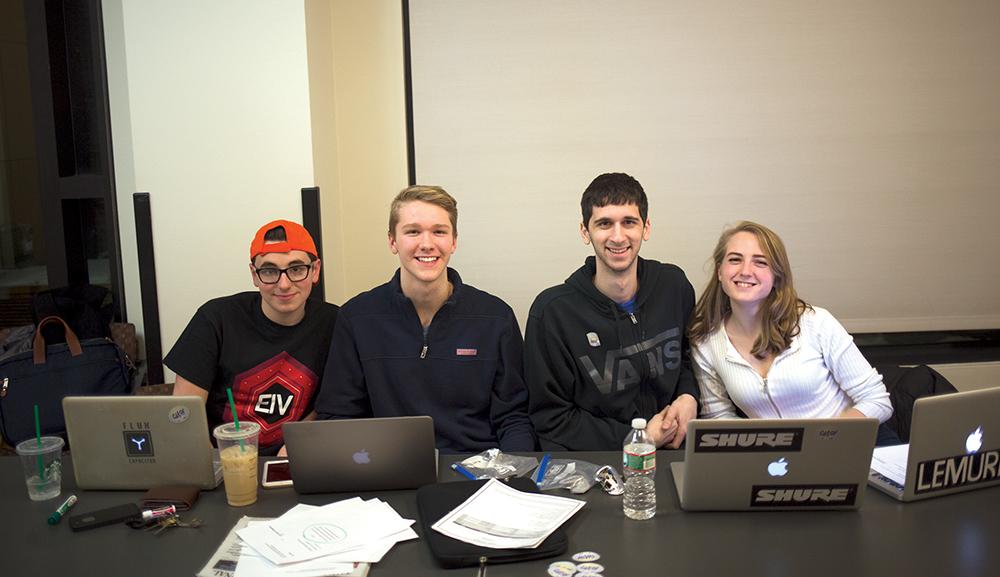 Last November, sophomore Michael Kiaunis decided he wanted to make a game show for college students. His vision was Campus Clash, a Family Feud-style game show where Emerson organizations compete against each other in the hopes of winning $300 toward a specific purchase or event.

A few weeks later, he brought his project to sophomore Kelli DiTomasso, whom he met during a networking exercise in their Writing for Television class. In need of a third executive producer, they approached junior Nicholas Dell’Omo, a technical support specialist in the TV studio. Together, the three of them successfully pitched the show to Emerson Independent Video.

When selling their idea, the three visual and media arts majors said they highlighted the collaborative quality of their show. As production students, they hope to use Campus Clash to open up Emerson’s television studios to the school’s greater population.

“A lot of other students on campus really have no idea what goes on there,” DiTomasso said. “We thought it would be really cool to bring in people from other majors and let them experience the world of TV the way we experience it.”

Although Campus Clash is not the first game show to grace Emerson’s airwaves, Kiaunis said that, unlike its predecessors, it will prioritize the participants over the production.

“We want to focus on the actual game show part with the orgs and getting everyone involved,” Kiaunis said. “We’re aiming it towards the smaller student government association orgs, like a cappella groups and theater groups, that don’t necessarily have big budgets like a group like EIV.”

Kiaunis said he is reluctant to compare the show to Family Feud. Although there are obvious similarities, Campus Clash is unique in its own right. For one, he said, the participants are student government association recognized organizations, not families.

“All of our questions are geared towards college students, and we changed the entire end game,” Kiaunis said.

By “end game,” Kiaunis is referring to Campus Clash’s “hot seat” round, where the episode’s winning team answers fact-based questions about Boston and Emerson. The score from this round will be compared to those of the winning teams from other episodes. The two organizations with the most points will then return for the season finale, where a purchase worth up to $300 will be up for grabs. The prize will be cosponsored by EIV in the purchasing process.

Campus Clash will be recorded in front of a live studio audience, which Dell’Omo said he hopes draws in fans and organization members. The show currently has no air date but is set to premiere simultaneously on the Emerson Channel and the EIV YouTube channel.

The three executive producers held auditions for the Campus Clash host on Wednesday and Thursday. DiTomasso said they are searching for someone who is energetic and witty.

“We would really like to have someone who can play off of people well and react quickly because the majority of the show is not scripted,” she said. “The host is going to have to think on their feet.”

Dell’Omo, DiTomasso, and Kiaunis will meet with the host and participants to make sure the show is appropriate for audiences. But Kiaunis said that it’s important that Campus Clash doesn’t play it too safe.

“It is aimed at college-aged students, so there are certain inappropriate topics that sometimes are covered,” Kiaunis said. “Like one of our questions is, ‘Name another term for marijuana.’”

Dell’Omo, the technical executive producer for Campus Clash, will make sure that every practical aspect of the show is feasible and carried out successfully. According to DiTomasso, Dell’Omo’s work on making the buzzer system trigger lighting changes and sound effects set it apart from other shows.

As Campus Clash’s creative executive producer, DiTomasso is responsible for creating segments that will introduce and promote each organization at the beginning of each episode. Kiaunis, the shows logistic executive producer, said he would like for Campus Clash to have four 20 minute episodes, but the number will depend on studio availability.

“We’re aiming for each episode to have two similar orgs compete against each other because most of those people know each other,” he said. “So we could have an episode with a cappella troupes and an episode with two comedy troupes.”

Kiaunis said that he would like to do another season if the first is successful. Once the show is off the ground, they would be able to spend more of the budget on better prizes.

“It was a long process of creating a show from the ground up: getting graphics, designing a set, getting a lighting plot,” Kiaunis said. “So, hopefully, our show’s wonderful.”

DiTomasso said the spontaneity of the show will create a fun atmosphere.

“It really allows for a lot of hilarity in different answers,” DiTomasso said. “For a lot of other game shows, there is one set question and you either get it right or wrong. You have no idea what Emerson students are going to say. It’s going to be really interesting to see how that all plays out on TV.”

Correction, Jan. 21: A previous version of this article implied that the award for Campus Clash will be $300 in cash, not $300 toward a specific program or event. According to the Student Government Association’s Treasury Handbook, student organizations are not permitted to grant cash prizes.