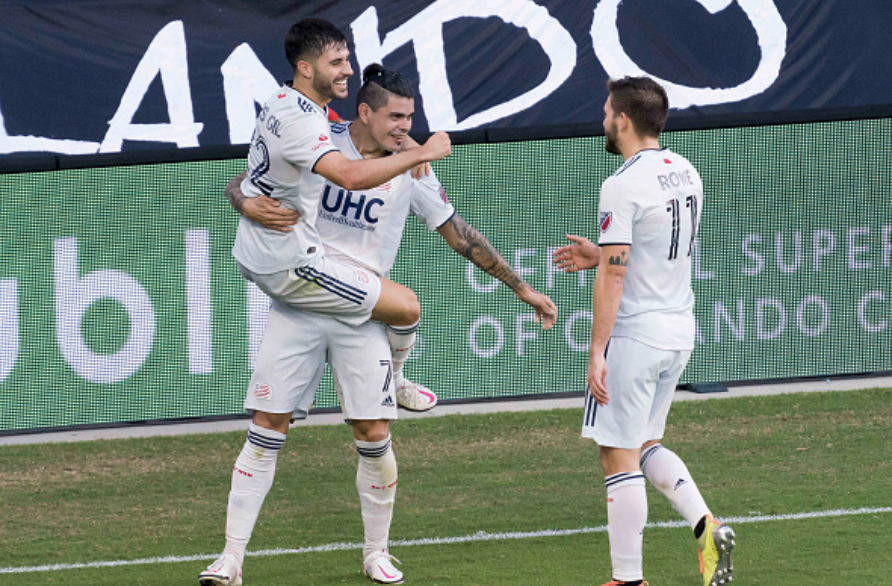 New England defeated No. 4 Orlando City SC 3-1 in the Eastern Conference Semifinal of the Audi 2020 MLS Cup Playoffs on Sunday, Nov. 29, sending the No. 8 Revolution to the Eastern Conference Final against No. 3 Columbus Crew SC. The scoreline does not do the game justice, however, as it was a tight and hotly-contested match.

The game kicked off with some fans in attendance at Exploria Stadium in Orlando, Fla. Despite the hosts being four spots above the visitors, this did not deter New England, who once again stunned the MLS and came out on top.

The scoring started in the 14th minute as New England forward Tajon Buchanan drove into the box, dribbled past Orlando midfielders Oriol Rosell  and Júnior Urso before Rosell fouled him for a penalty. Captain Carles Gil stepped up to the penalty spot and slotted the ball down the middle to take a 1-0 lead in the 16th minute.

Nearly ten minutes later, Buchanan stole the ball from Orlando’s captain, Nani, and played the ball to Gil to start the counter attack. Gil drove up the field, waiting for an overlapping run from Buchanan, to whom he passed the ball. Buchanan then played the ball into the path of a sliding Adam Buksa, whose attempt hit the post but rebounded to forward Gustavo Bou who smashed the ball into the back of the net for New England’s second goal. Bou capped off his celebration by laying down the Argentinian flag and kneeling in honor of the late Argentinian legend Diego Maradona, considered one of the greatest players of all time, who passed away on Wednesday, Nov. 25 at the age of 60.

Orlando got on the scoresheet in the 32nd minute. Nani played a long diagonal ball into the box for forward Chris Mueller, who brought the ball down, but it bounced in front of him into the path of Revs goalkeeper Matt Turner. The keeper failed to secure the ball, and the ball trickled to Urso, who scored to cut Orlando’s deficit to 2-1.

Although the scoring died down, the game remained  a tense affair. Orlando’s lack of discipline, which has been a growing issue the past few weeks,  resulted in a red card in the 60th minute as Orlando midfielder Mauricio Pereyra tackled New England midfielder Matt Polster from behind with his studs showing. This was Orlando’s third red card of the playoffs and the fourth in their last four games. Orlando’s players aggressively argued with the referee. Urso was one of them as he constantly harassed the referee and pushed him around, adding to the tensions as the game really began to heat up.

Orlando had a golden chance to tie the game in the 72nd minute on a penalty kick. Defender Kyle Smith chipped the ball to Nani, but it took a deflection before the captain could control it and ended up at the feet of forward Daryl Dike, who was brought down from behind by Polster for a clear penalty. Nani shot it low to the keeper’s right hand side, but Turner saved the shot keep the Revs’ lead.

The game was finally put to bed in the 86th minute. After some clever interplay between Gil and Buksa at midfield, Gil drove forward and sent a through ball to Bou in a great position, who slotted his shot between the keeper’s legs to make the score 3-1 and seal the win for New England.

Although there were only nine shots on goal between the two sides—six by New England and three by Orlando— the match did not fail to entertain. It was also, in many ways, a game of repetition. For Orlando, Nani missed his second penalty in two games, the red card streak continued, and there was little production on offense.

For New England, we once again saw they are comfortable even without possession. Despite once again maintaining less possession (38 percent) than their opponent, that did not trouble them as they took advantage of the possession they had. We saw the usual subjects appear on the score sheet as all three Designated Players seemed to be a threat. Buksa may have not scored, but his shot off the post led to Bou’s first goal, and Gil scored one and assisted Bou’s second goal. We also saw Tajon Buchanan use his youth and speed to be a constant threat on the right side of the field, win the penalty early on, and nearly record an assist in the play leading up to the second goal.

New England looks dangerous—it’s as simple as that. Bruce Arena transformed a team that struggled as of late and molded it into a real contender to win the conference title and, possibly, the MLS title. The Revs don’t need to play fancy possession-based soccer or they control the ball all 90 minutes. What we’ve seen is they are effective when they attack. In their last two games, they have scored 50 percent of their shots on goal and have not been afraid to play their own style of game against teams that had been doing better in the league.

New England knows it has been doing a fantastic job this postseason, but the team cannot sit on their laurels just yet. They face Columbus this Sunday in the Eastern Conference Final, and winning will earn them a place in the MLS Cup Final.

Columbus is coming off a long semifinal against Nashville, which went to overtime and saw Pedro Santos and Gyasi Zardes score to win the game 2-0.

Columbus is ranked third in the conference, but their ranking certainly will not phase the Revolution who have already knocked out the No. 1 Philadelphia Union and No. 4 Orlando City. New England will seek to exploit their attacking trio of Designated players to qualify for their sixth-ever MLS Cup Final.

The match is Sunday, Dec. 6 at Mapfre Stadium in Columbus, Ohio. The start time is yet to be determined.