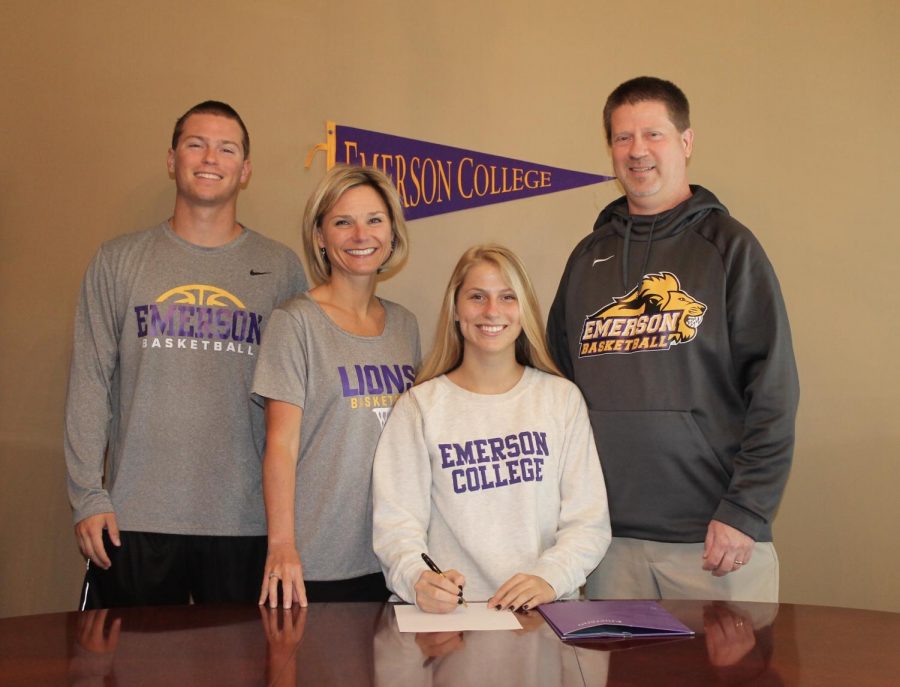 Herbert made her commitment to the Lions official on her birthday.

Instead of participating in the fanfare of a regular high school signing ceremony, which was canceled due to the COVID-19 pandemic, Herbert officially committed to playing women’s basketball at Emerson College from home on March 27, her birthday.

The 5’8” guard attends Eureka High School, a school outside of St. Louis, Missouri. Herbert played four seasons as a starter on Eureka’s varsity basketball team and led them in assists, rebounds, charges taken, steals, blocks, and three-point percentage during her senior season.

In an interview with The Beacon, Herbert said she knew she wanted to move away from St. Louis. After a nationwide search, including schools in Chicago, California, and Colorado, she committed to Emerson.

Herbert said head coach Bill Gould became involved in her recruiting fairly early in the process, creating a relationship before she stepped foot on campus.

“We emailed back and forth for a while, maybe going into my junior year,” Herbert said in a phone interview. “This past summer, he traveled to Chicago to watch tournaments and got to see me play, so I got to meet him.”

The consistent communication between Gould and Herbert led to a trip to Boston to visit the campus. Herbert said she wanted to attend school in a city, so Boston is an ideal fit.

In addition to the location of the college, Herbert said the Political Communication major appealed to her. Herbert met Professor Spencer Kimball, who she said left a lasting impression on her.

All of these factors led to Herbert’s realization that Emerson was the right school to continue her academic and athletic careers.

“The location, I love a lot,” Herbert said. “Then the school itself, I really think the Political Communication major is gonna be a good fit for me since I love politics, and I met Spencer [Kimball], the professor, and he’s really cool and seemed really helpful. So just everything about it was kind of perfect for me.”

On the court, Herbert will join the Lions with an opportunity for early playing time. Three of the Lions’ guards on the roster are seniors, creating a void on the court that needs to be filled next season. Herbert said she is preparing to take on any role that Gould gives her.

“I’m not sure if I’ll get playing time right away,” Herbert said. “I mean, that would be amazing, but I’m willing to play whatever role the team needs me to play. I’ll be happy with whatever I can do my first year and then hopefully just improve from there.”

Offensively, Herbert said her strengths are her passing and ball handling, and she prides herself on her ability to take charges on defense.

“I love giving people the ball for assists,” Herbert said. “I think I’ve got pretty good court vision, which is something I’m pretty proud of. Defensively, I’ve grown a lot since I first started out, and I love to take charges which can be pretty big in game situations.”

Coach Gould said he avoids placing expectations on freshmen before they arrive on campus, but he does see ways Herbert will be able to contribute on the court, particularly with her toughness.

“Every time I saw her play, she probably took two charges,” Gould said in a phone interview. “She was just a tough kid who is willing to play hard, willing to be a leader, and willing to just do what it takes to win.”

As Gould began to watch Herbert closer, he said he began to see more impressive aspects of her game. Gould said she is a smart player who can shoot, and he praised her versatility.

Off the court, Herbert said she is looking forward to fully immersing herself in college life in a big city.

“I’m looking forward to making new friends the most,” Herbert said. “Definitely no one else from my school is going to Emerson, and it’s just going to be a whole new group of people that I’m excited to meet. I’m excited to play all four years and live in the city, get to know the area, and just have a new perspective on a lot of things.”