New Faces: Pietrzak eager to bring her passion to the women’s volleyball team 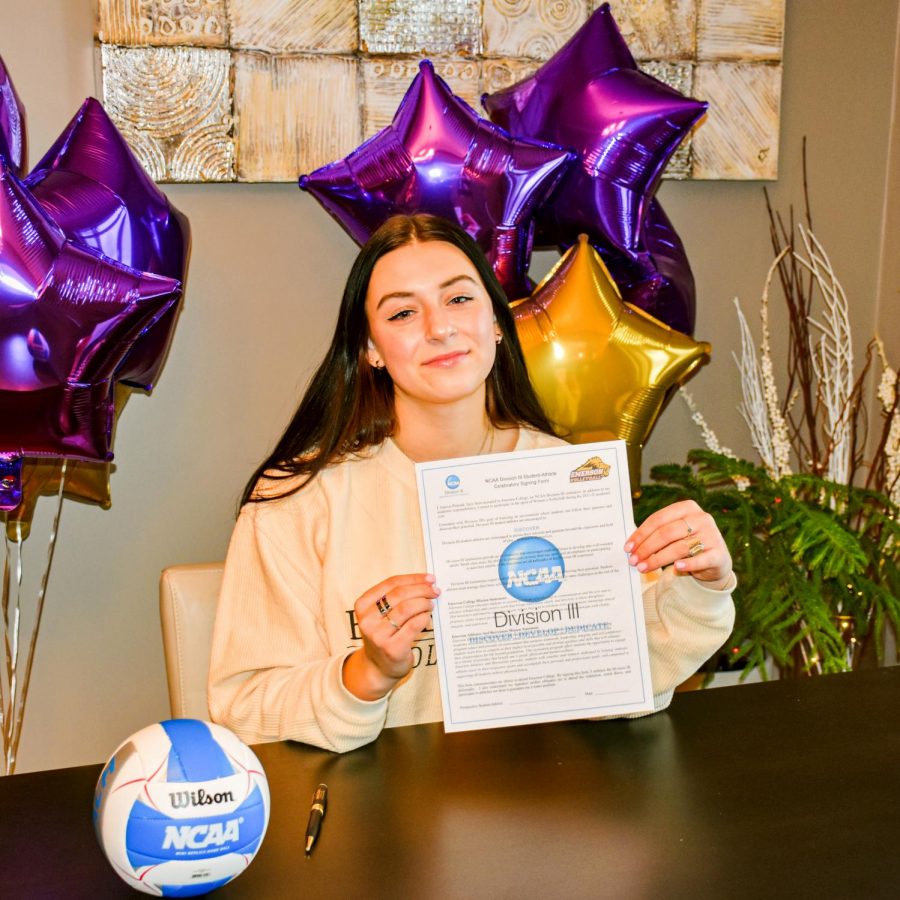 Surrounded by purple and gold balloons and wearing an Emerson College sweater, Lauren Pietrzak officially committed to join the women’s volleyball team in the fall semester. She signed her NCAA Division III Student-Athlete Celebratory Signing Form from her home in Orono, Minnesota on Dec. 23.

“I made a verbal commitment I think around October, and then I officially signed about a month ago,” Pietrzak said in an interview. “It was very exciting to make everything official.”

Pietrzak, a libero and defensive specialist, will major in media arts production. She said the combination of academics, athletics, and city environment made her feel Emerson was the perfect school for her.

“The main thing that drew me to the college was that it’s a really good school for what I want to study,” Pietrzak said. “On top of that, I was able to play a sport that I really like. I also knew that I wanted to go to a school in a city because I don’t really live in a city, and I didn’t want a super big school.”

Pietrzak began her volleyball career in third grade. She honed her skills on the court as a four-year member of Orono High School’s varsity team while also competing for two Junior Olympic club teams throughout high school. She played for Vital Volleyball Club as a first year student and sophomore before switching to Midwest United Volleyball Club for her junior and senior years of high school.

She said winning the JVA MKE Jamboree—a tournament hosted by the Junior Volleyball Association in Milwaukee, Wisc. featuring 250 teams from the Midwest and Great Lakes—along with Vital Volleyball Club is one of the biggest accomplishments of her career.

“My team won, which was pretty exciting because it’s a really big tournament and a lot of teams travel there,” Pietrzak said.

In addition to being an accomplished club player, Pietrzak is a decorated high school player. She was named Orono’s captain for her senior season, and she earned a spot on the Wright County Conference All-Conference team following the fall season.

Many volleyball players begin the recruitment process in their freshman and sophomore years of high school. Pietrzak, however, decided she wanted to play college volleyball “at the last minute” during her junior year.

“It just wasn’t something that I thought could be a reality,” Pietrzak said. “Thankfully, that all worked out well.”

After discovering Emerson’s media arts production program, she began speaking to head coach Benjamin Read via email with highlights and live streams of her games. Pietrzak visited Emerson in October to meet some of the team and see the campus—all while following COVID-19 restrictions.

“I wasn’t able to go into most of the buildings, but I had met pretty much most of the team,” Pietrzak said. “It was very good, and I really wanted to do that.”

Pietrzak is eager to bring her energy and passion for the sport to the Bobbi Brown and Stephen Plofker Gym when she joins the team in the fall.

“For all the teams I’ve been on so far, I feel like I play a role of being a very energetic player,” Pietrzak said. “I think that’s the main thing that I bring to the team—a really good attitude and love for the sport, and a lot of energy on and off the court.”