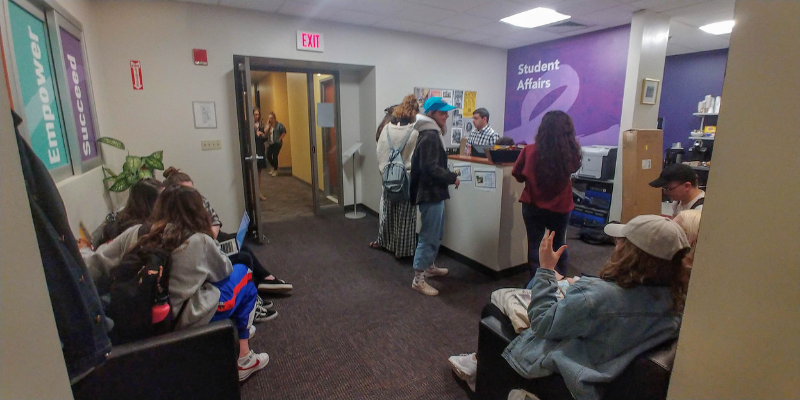 The college plans to improve communication and transparency with students in this year’s upcoming housing selection process with a redesigned housing portal that will feature graphics to better explain the specifics of the process to students, according to college officials.

Kendra Stokes, associate director of housing operations, said the new housing portal will emphasize visuals and diagrams rather than long blocks of text. The visuals will appear alongside the pre-existing text. Stokes will implement the changes with Housing Operations Coordinator Chris Muchata beginning this month and ending in April.

“After speaking with some student focus groups on the selection process… we made the decision to go ahead and make the process more transparent,” Stokes said in an interview. “The bones of the process are going to remain, in essence, the same, however, the way in which you add yourself to a group will [have] less words and more visual to help our students better understand the process.”

The plan to redesign the housing portal follows a tumultuous housing process in Spring 2019 after StarRez, the college’s housing software, crashed. Last fall, The Beacon reported that five vacancies in the Office of Housing and Residential Education led to the adjustment of the structure of the department. Former Senior Associate Director of Housing and Residence Life Seth Hodge then left the office on Jan. 2.

Stokes stressed that much of the confusion from last year’s selection process resulted from students not paying close enough attention to the materials provided by OHRE.

“It was clear that some of the frustration and confusion would have been solved if students took a pause and read some of the materials closer,” she said. “By slowing down and making things visual, that will help students best understand what happens when you do something on a particular page of the process.”

Stokes said the changes to the group creation process may be the most effective because there will be clearer explanations of what suites are available in each building on campus. Students will see the changes implemented throughout every stage of the housing process.

Housing Operations Coordinator Chris Muchata said while the housing process will stay the same, they are going to use infographics to better explain the process to students.

“I’ve been working on some graphics that we’re going to kind of sprinkle in through the actual process,” he said, “to kind of better visually grasp what spaces are available in certain halls.”

Many of the changes are designed to help first-year students, who may not know what certain residence halls are like.

“Maybe they’ve been to the Max in [Piano Row] but they’ve never really been in [Piano Row]” he said. “So we really want to make sure our whole campus community understands what all the buildings look like.”

OHRE will offer open office hours during the selection process for students to receive personalized advice from Stokes or Muchata. Muchata said this will help set more realistic expectations for students in terms of what they can expect from their living situation.

“We can explain to students who are like ‘Well I really want to live in x, y, z accommodation with so and so,’ and I think during those conversations we can help clarify what spaces are available,” he said. “But those are going to be individualized conversations [and] we’re hopeful that will be really helpful for folks.”