New Lions adjust to Emerson on and off the court 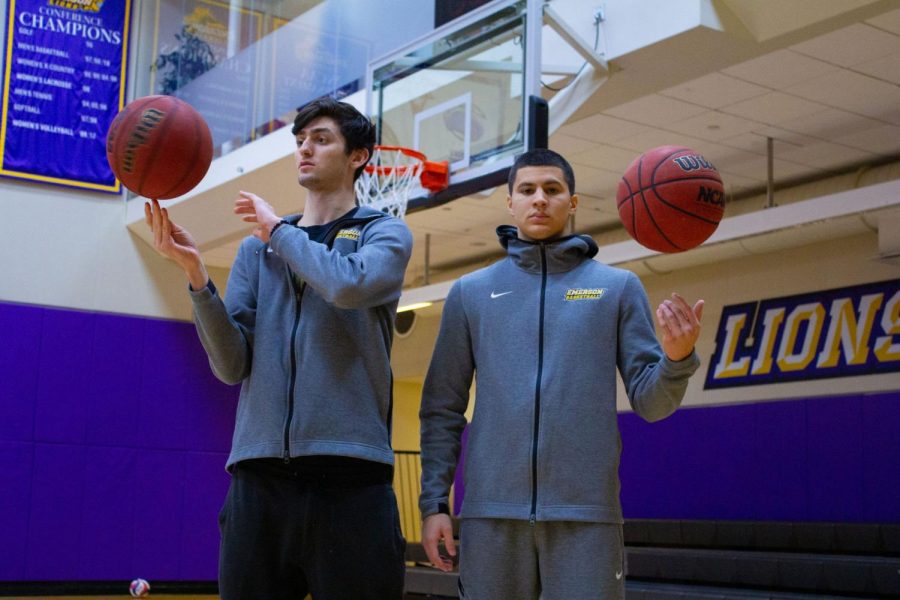 Freshmen shooting guards Max Davis and Bryan Lupianez, the two newest additions to the men’s basketball team, said one of the best things about Emerson is the food served in the Dining Center.

“I like it, the DH is really good,” Lupianez said in an interview. “My favorite is either the omelet or the chicken quesadilla.”

Admissions played a key role in when the two freshmen arrived on campus. The coaches worked to get both Davis and Lupianez into Emerson for the beginning of the season, but both players received offers for the spring semester.

“We liked what we saw, and we were able to get them in for second semester,” head coach Bill Curley said in an interview. “We will take our players whenever we can get them.”

Davis and Lupianez arrived at Emerson in late December, joining the team halfway through its season.

With the addition of Davis and Lupianez, there are now six freshmen on the Lions’ roster to go along with five sophomores and four upperclassmen. Curley is not concerned about the ages of his players or how it affects them during games.

“We know we’re young,” Curley said. “A lot of this is new for these guys. The terminology, the intensity every day and the commitment every day. We really think we have a lot of talent on this team. We really like the kids we have, and it’s just about getting them up to speed and getting them to where we want to be.”

“Everyone in my family are baseball and football players,” Davis said in an interview. “I think that when I was three I was drawn towards a basketball. I just found myself gravitating towards it.”

Davis said he chose Emerson due to the promotion of creative culture. In addition to basketball, Davis is passionate about music.

“I was looking for a place where I could play basketball, but also do other things,” Davis said. “I found that Emerson was the perfect mix.”

Lupianez said the school’s mix of academics and athletics drew him to Emerson.

“It was the sports communications, and playing in the NEWMAC because it is one of the best Division III conferences,” Lupianez said.

Lupianez began playing basketball at age eight. His middle school basketball coaches cut him from the team, but this did not stop him from continuing to play.

“I knew that I was meant to play basketball,” Lupianez said in an interview.

Lupianez said he knew he wanted to play for the Lions after his first visit.

Both players also agree the gym is one of the best places Emerson has to offer.

“I like home games here a lot,” Davis said. “I really like the atmosphere of the gym. It’s really small, so it gets really crowded. I love playing in a loud gym. It’s part of what drives me.”

Both Davis and Lupianez played in the Lions’ win against Wheaton College on Jan. 25 and even though they did not play many minutes, Coach Curley knows the two players added value to the team.

“It’s a difficult transition,” Curley said. “They’re going to have bumps and bruises, but we like their potential and what they bring.”