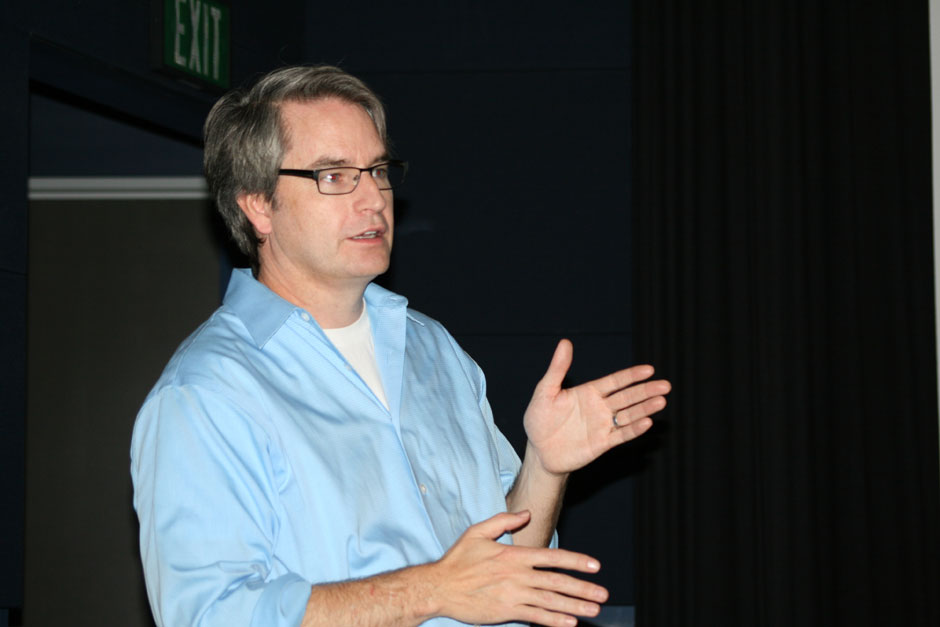 To artists Brooke Knight, an interactive and digital media professor at Emerson, and Russell Goldenberg, a third-year MFA media arts student, art is an illusion—an infinitely changing interactive experience, defined in part by the viewer and created by the piece itself.

In a presentation at the Paramount Center’s Bright Family Screening Room last Tuesday, Knight and Goldenberg displayed pieces that use technology to enhance the act of consuming art — part of a growing movement called “augmented reality.”

Knight presented a meditation on the perception of time called Video/Still — a visual work that falls somewhere between static photo and motion picture. The first “photograph” that Knight showed was of a peaceful forest. At first glance, it seemed like a still, but after careful observation, one could notice the image gradually changing. The artist compared the movement of the trees and the light to that of a clock: When you stare at a clock, time doesn’t seem to change, but when you leave and come back, there is a noticeable difference.

“The movement is actually so dramatic, but it’s imperceptible at such a slow rate,” Knight said. Viewing the picture is a thought-provoking experience for which the observer must be fully engaged to even catch the slowly-shifting phases of the piece.

Knight showed several of these landscape works, experimenting with nature, light, and the span of time. “I’m interested in people being able to perambulate through a gallery space, leave, come back, and have a different experience,” he said.

Knight said that he has always been fascinated by the idea of what location means to people. He showed an idea he has developed for “temporary, non-destructive graffiti.” Viewers type text into their phone, take a picture of a location, and then the text appears superimposed over the photographed background. The viewer/photographer could then upload that picture, with the GPS coordinates, to an online database.

Goldenberg describes his artistic methods as creative coding — using computer programming as a means to create artwork. He programmed “A Sound Herd,” an artificial intelligence simulator that creates an ecosystem of virtual organisms —  represented by colors, shapes, and sounds — that can interact. Swimming digital creatures cross paths in order to reproduce, spawning new organisms.

In another piece, Goldenberg visualizes gathered weather data on time, wind speed and direction, temperature, precipitation, and humidity as oscillating circles. Goldenberg transforms what would otherwise be bland empirical information into a “Weather Symphony.”

Goldenberg’s thesis project, “Void Setup,” is his most ambitious. He had his colleagues collect random artist statements which he compiled and put into a computer thread. The computer randomly generates two statements, and Goldenberg interprets the words to create a piece of art.

In one instance, Goldenberg combined statements that read “The viewer leaves with the art after viewing it,” and “I can capture the compression of time and history through abstraction and metaphor.”  He interpreted these two voices and created an interactive project based on the meaning he inferred.

In a gallery, there would be a screen that said, “Hello, press to begin art.” The viewer could press the screen, get an image of their face, and then when the viewer was comfortable, they could stop the picture, and print it out. The longer the viewer looks at the image, the more focused and less blurry the image will be. The artwork that was made by the computer would be directly related to the viewer’s experience.

Knight and Goldenberg’s common theme is a desire to integrate their audiences into the artwork they are viewing. Becoming comfortable with how entwined people and technology are is paramount. “Art occurs when the viewer recognizes that he or she is having an art experience,” Knight said.