New org focuses on self-care instead of self-promotion 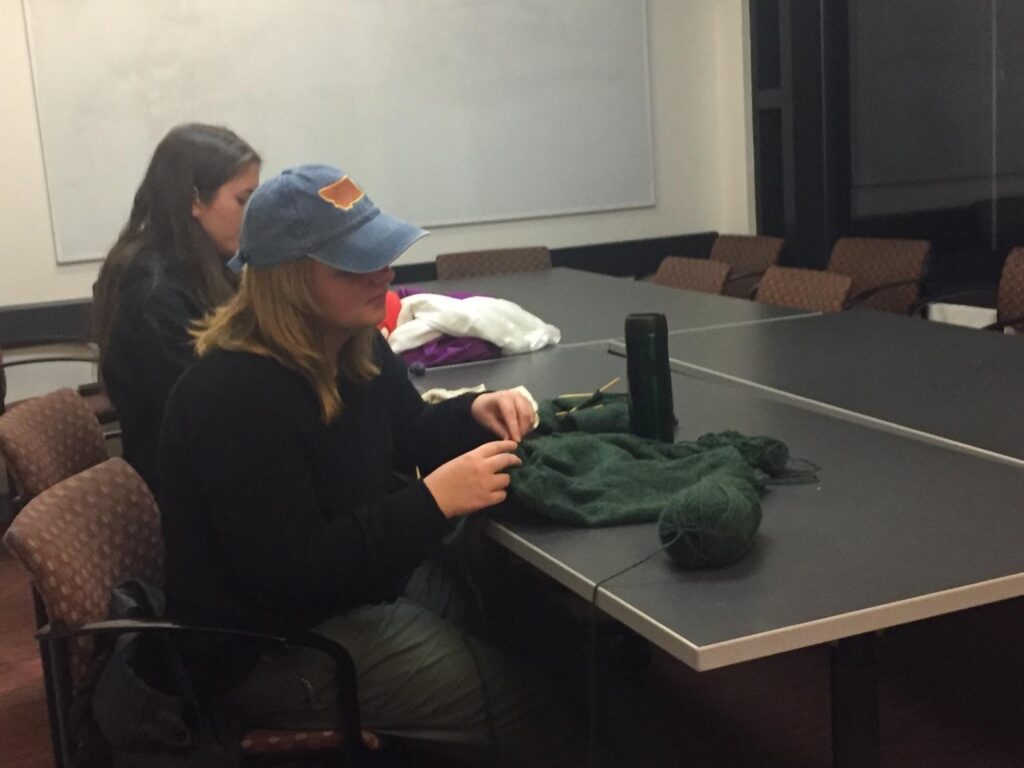 The sound of clicking knitting needles and animated murmurs can be heard every other Wednesday night in Piano Row 118. But, if you listen a little closer, you might notice themes to the conversation—talk of classes, mental health, work-life balance—set to the cathartic sound of steel craft tools weaving wooly scarves. This is a new club on campus called Stitch and Bitch.

The group is all about knitting, venting, and offering emotional support to peers. It provides a place where people can come together and knit, or do any sort of craft, and talk about what makes their life stressful.

Tessa Pollock and Nicole Cutinella are the founders of Stitch and Bitch. They started the club because they felt that many other organizations on campus create stress instead of relieving it.

Cutinella said she hopes the group teaches her peers to take time for mental health, and that slowing down can be productive, too.

“Schedule time to do something creative,” Cutinella said. “Do something that isn’t necessarily so goal oriented.”

From the start of freshman year, both Pollock and Cutinella said, they piled their plates too high, and felt overworked. Cutinella is a part of many Emerson student theater and television groups. Pollock participated in multiple clubs, and was the acting Fraternity and Sorority Life president.

Even though Pollock said she loved all the organizations that she was involved in, she felt as if she were giving so much of herself to these clubs without any left over time in the day to take care of herself. She said she didn’t focus on her mental health, except of course when she was knitting with her friends in Cutinella’s suite.

Pollock and Cutinella realized the act of knitting gave them the chance to pause and rest. They wanted to share this ritual with others, and thus Stitch and Bitch was born.

“Emerson clubs are all about resume builders and adding stuff onto your plate,” Pollock said.  “We wanted Stitch and Bitch to be a way to relieve the pressure for just a few hours.”

When starting the club, the two founders were worried that no one would show up, especially since the Student Government Association did not recognize them and they couldn’t participate in the official fair. But at the Alternative Org Fair, about 80 people signed up and at the first meeting, the room was filled with around 60 strangers with knitting needles in hand and plenty of material to bitch about. This was astounding since 80 initially signed up and 70 are currently on their Facebook page.

At first glance, this organization may seem frivolous or a facilitator for pure gossip, like a hybrid of Gossip Girl and an HGTV craft show, the creators say but that couldn’t be further from the truth. Pollock and Cutinella pride themselves on the fact that this organization is one based around the idea of self-care.

This theory that knitting can be used as a mental health exercise is not something that Pollock or Cutinilla made up. Many doctors encourage people to take up knitting as a form of stress relief. Herbert Benson, a Harvard Medical School and Wesleyan University graduate, has written extensively on the subject of relaxation and knitting as a tool to reach a meditative state, similar to yoga.

The mission of self-care is so important to Stitch and Bitch that they also invite people to come who just need to “bitch” about life, no knitting needles or other form of art necessary. They want all students to feel as if they have a space to care for themselves, where their well-being is the priority for once.

Members make all sorts of projects during these two hours on Wednesday night, from knitting scarves to pads (and I do mean literal feminine pads) that read the word “Feminist” across them in bright red stitching.

They made their splash at the Alternative Organization Fair, but hope to eventually make their way to the official organization fair.

Pollock and Cutinella said they hope the club lasts beyond their graduation. But for now, they’ll be stitching their woes away, Cutinella said.

“Close out the world for a little bit and focus on something that is meditative and mindful and just de-stress,” Cutinella said. “And there’s free tea so [why not]?”